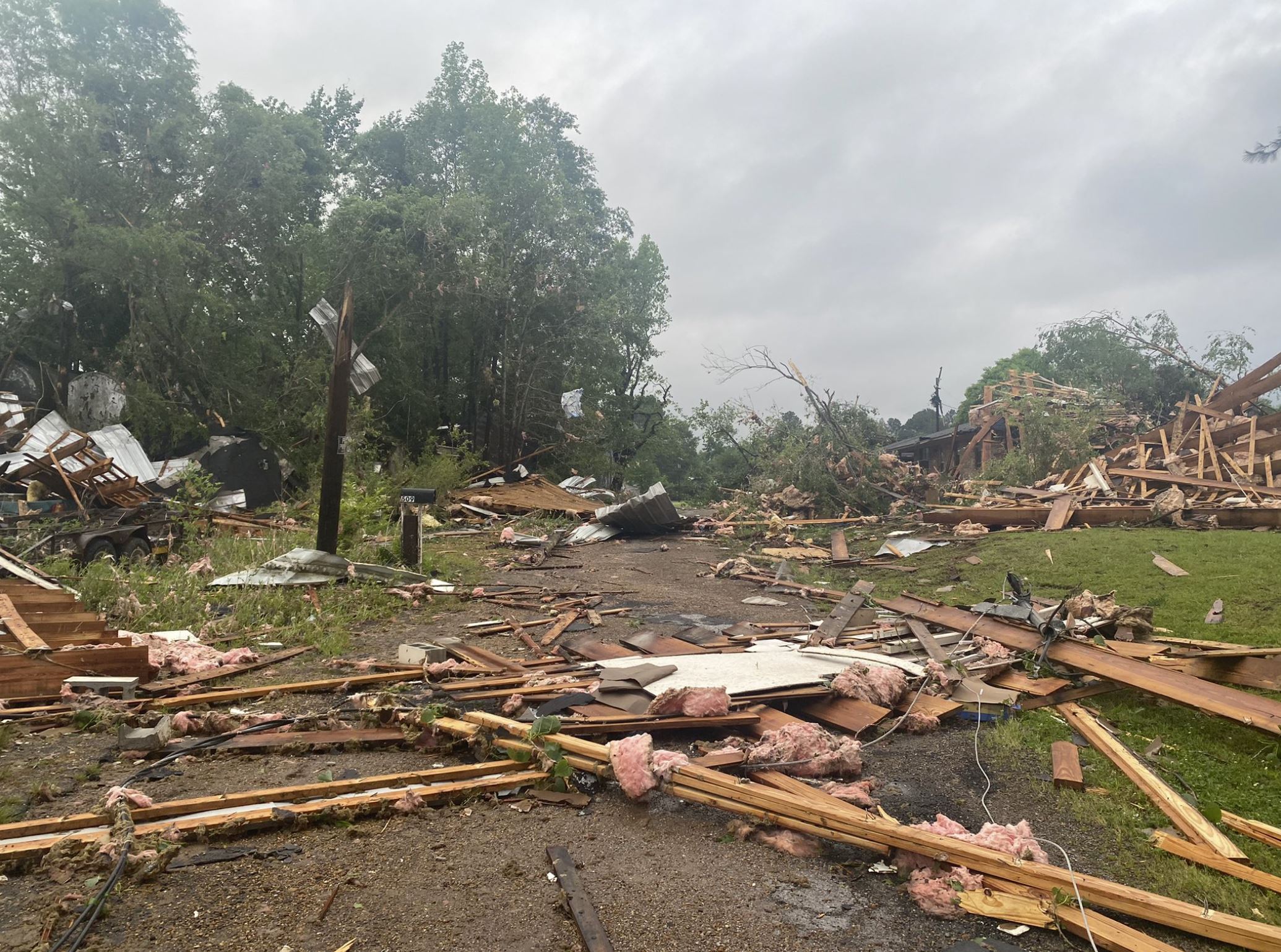 Posted By: Erica Thomason: May 03, 2021In: Metro/State/Nation, Weather
Print Email

YAZOO CITY, Miss. (AP) — Severe storms spawning multiple tornadoes moved across the South on Monday, damaging homes and uprooting trees from Mississippi to Kentucky. A tornado spotted in Atlanta forced thousands to seek shelter, and one man was killed when a falling tree brought power lines onto his vehicle.

The motorist was pronounced dead after fire crews cut him from the vehicle in Douglasville, Georgia, west of Atlanta, Douglas County spokesman Rick Martin told reporters. No other details were immediately released.

The weather first turned rough in Mississippi on Sunday, where just south of Yazoo City, Vickie Savell was left with only scraps of the brand-new mobile home where she and her husband had moved in just eight days ago. It had been lifted off its foundation and moved about 25 feet (8 meters). It was completely destroyed. 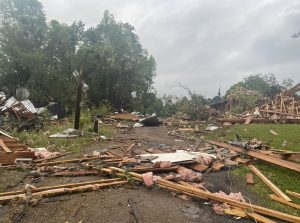 “Oh my God, my first new house in 40 years and it’s gone,” she said Monday, amid tree tops strewn about the neighborhood and the roar of chainsaws as people worked to clear roads.

Savell had been away from home, attending church, but her husband Nathan had been driving home and hunkered down in the front of his truck as the home nearby was destroyed. From there, he watched his new home blow past him, he said.

Nearby, Garry McGinty recalled being at home listening to birds chirping — then dead silence. He looked outside and saw a dark, ominous cloud and took shelter in a hallway, he said. He survived, but trees slammed into his carport, two vehicles and the side of his house.

A line of severe storms rolled through the state Sunday afternoon and into the nighttime hours. Late Sunday, a “tornado emergency” was declared for Tupelo and surrounding areas.

There were multiple reports of damage to homes on Elvis Presley Drive, just down the street from the home where the famed singer was born. Presley was born in a two-room house in the Tupelo neighborhood but there was no indication that the historic home sustained damage. It’s now a museum.

Just down the street, a tornado tore the roof off the home of Terrille and Chaquilla Pulliam, they told the Northeast Mississippi Daily Journal. About 10 family members took shelter inside the house, and “we got everybody inside in time,” Terrille Pulliam said.

“Light poles have been snapped off. Trees in a few homes. Trees on vehicles. Damage to several businesses. Fortunately we have had no reports at this time of injuries,” Pollan posted on Facebook.

“I don’t even recognize my neighborhood anymore,” resident Martha Edmond told the Northeast Mississippi Daily Journal after a tree poked a hole in her roof, causing heavy water damage. Two locations of a metal fabrication company were heavily damaged.

As the system moved east, storms damaged homes in a Kentucky town early Monday and a tornado watch for much of the day covered large parts of Alabama and Georgia.

In South Carolina, at least one tornado was reported Monday afternoon in Abbeville County. The tornado appeared to be on the ground for several miles, according to warnings from the National Weather Service. No injuries were immediately reported. In Greenwood, downed trees and power lines were reported, while tents were blown onto cars at an auto dealer. Multiple locations reported golf ball-sized hail.

In the southern Kentucky town of Tompkinsville, a severe storm Monday morning damaged several homes and knocked down trees and power lines, Fire Chief Kevin Jones said. No injuries were reported, he said.

National Weather Service surveyors confirmed one tornado west of Atlanta near where the motorist died. The twister was determined to have peak winds of 90 mph (145 kph) with a path that ran 1.5 miles (2.4 kilometers). At least 10 homes had trees on them.

The same thunderstorm sent thousands of people to shelter in more central parts of Atlanta and may have produced at least one more tornado southwest of downtown. Atlanta firefighters responded to multiple calls of trees down, Atlanta Fire Rescue said in a statement Monday. No significant injuries were reported, although more than 20,000 Georgia residents lost power at one point. Possible tornado damage was also reported in the region around Athens.

A warm, moist air mass was in place as an upper-level disturbance moved across the area, touching off the storms over Mississippi, said Mike Edmonston, National Weather Service meteorologist in Mississippi.

“The ingredients were just enough for the development of severe storms,” he said. Three survey teams from the weather service were preparing to assess the damage in Mississippi, he said.

More storms are in store for parts of Louisiana, Mississippi, Alabama and Georgia on Tuesday, forecasters said. Tuesday’s storms could bring wind gusts of up to 70 mph (113 kph) and hail to the size of golf balls, forecasters said, noting that “tornadoes are likely Tuesday into Tuesday evening” in parts of Mississippi.