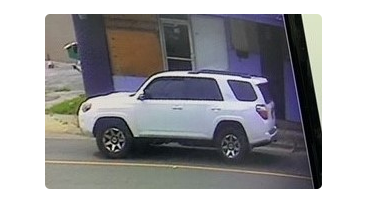 FAIRFIELD — The Jefferson County Sheriff’s Office is asking for the public’s assistance in locating the suspect vehicle that was used in a recent Fairfield homicide.

Police say a shooting took place at around 3:10 p.m. on Sunday, May 9 near 311 Valley Road in Fairfield, resulting in the death of 31-year-old Douglas Crenshaw. 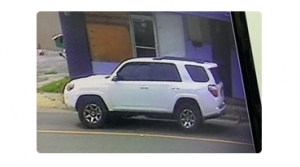 Authorities believe a person inside of the pictured vehicle, which appears to be a white Toyota 4 Runner, opened fire on a black Dodge Charger while the vehicles were stopped at an intersection in the 300 block of Valley Road in Fairfield.

Police say video evidence of the shooting suggests there was also a black Chevy Traverse traveling behind the victim’s vehicle at the time of the shooting.  Detectives would like to speak with the occupants of the Traverse in relation to what they saw.

FAIRFIELD — The passenger of a vehicle that was driving through Fairfield on Sunday afternoon has been killed after a suspect opened fire on the car.

Jefferson County Sheriff’s Deputies were contacted by Birmingham Police officers to advise of a shooting that had occurred at 311 Valley Road in Fairfield at approximately 3:10 p.m., according to JCSO.

Police say the victim was located at the 5700 Block of Avenue O in Birmingham, and was pronounced deceased at the scene. Authorities believe  the victim was a passenger in a vehicle that was stopped at an intersection in the 300 block of Valley Road when someone in an unidentified vehicle opened fire on their vehicle. Police say the driver of the vehicle sped away from the gunfire when he realized the passenger had been struck.

The cause of the shooting is currently unknown.