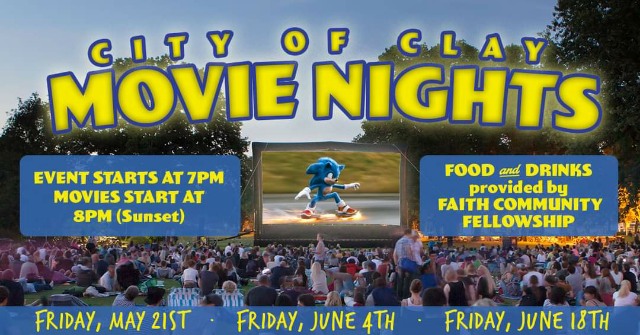 City of Clay Movie Nights to begin May 21

CLAY — Clay City Councilor Bo Johnson announced at the regular Clay Council meeting on Tuesday, May 11, 2021, that the city’s annual movie nights will kick off a week from this Friday with the movie “Onward.” The city will hold three Friday night movie nights behind the new Clay Public Library beginning at 7 p.m. on May 21, June 4 and June 18.

“Faith Community Fellowship is going to pull their trailer up and provide food and drinks for that,” Johnson said. “We’ve got a couple of other churches coming on board to help with popcorn and cotton candy and, quite possibly, Faith Community is going to handle the inflatables for us this year, as well. It’s cool to have people and churches working together for that event. We encourage everybody to come out.”

The city council unanimously approved Ordinance 2021-01, an ordinance to repeal ordinances pertaining to park rules. During its April 27 meeting, the council passed a motion to accept a new document outlining the city’s park rules and rental agreements.

“We had a bunch of rules, ordinances, resolutions that have been put in place, really since 2001, that pertain to individual services that we rent, whether it’s Cosby Lake or the Cosby Lake pavilion or the play ground pavilion,” City Manager Ronnie Dixon said. “What (the council) voted on two weeks ago put park rules in place for everything that we have on one document. What this does is repeal all those things that have been put in place since 2001 and refers everything to the document that (the council) passed two weeks ago.”

“The reason for that is we need to hire one person in Public Works and two people at the library and five people at the splash pad,” Dixon said. “With the fast food service industry, in particular, offering signing bonuses and $12-15/hour, we’re having a hard time recruiting people for those jobs. If I offer that much per hour to new, part-time, temporary help in those departments, it’s going to put some of our regular part-time (employees) that have been here for years, in some cases, making less than what the new hire will. So, in order to catch us up to where we are nationally with employees, we need to raise those salaries to a competitive level.”

With only five months remaining in this budget year, Dixon said that the amount added will also contribute to the next budget year. The motion passed unanimously.

Dixon added that Jefferson County Schools will be offering a summer school program called SOAR, which will allow students who have fallen behind the opportunity to catch up and students who are already caught up an opportunity to advance themselves. Parents can sign their students up for this program at jeffcoed.com.