CLAY — A Clay-Chalkville High School senior will be leaving the nest soon. But his impact in the community will always be felt. As an inspiration to many, Kameron Peterson will go down in Clay history as one of the most challenged and successful athletes to walk the halls of his alma mater.

Peterson has held a steady 4.0-grade point average, he has been consistent on honor roll and he has been inducted into the National Honors Society. Although his academics are more than impressive, it’s his athletic abilities that really make him shine.

During his senior year, Peterson won the 6A State Championship in track for the 4×100 relay, he was named Player of the Week for The Tribune and he was an honorable mention for the 2020 All-Tribune Team. 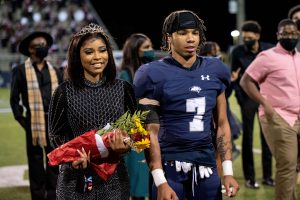 To top it all off, he was crowned Homecoming King and he received numerous scholarship offers, awards and medals.

So, what was it that made Peterson such a success story? It was not only his natural ability to own any field and do well in the classroom, but Peterson said a lot of his motivation came from his support system.

“Part of it is the fact that I just didn’t want to fail at anything,” Peterson explained. “Plus, I know my mom has been hard on me. Basically, my whole family has been hard on me about getting my education. As a kid, they’ve always told me that I’ve been at the top of my class and I just didn’t want to like, let myself down and anyone else down. So, I just stayed on top of my academics and made sure that I handled all of that.”

And as for sports, his family has been in the stands through it all. Peterson said even people in the public have cheered him on through the years.

During his freshman year, Peterson played football, basketball, and track. But it wasn’t long before he realized he had to give up one of the three sports.

“I let basketball go because it was a lot on my body doing three sports,” explained Peterson. “So, my tenth grade through 12th-grade years, I did football and track.”

Even with only two sports to focus on, Peterson said he continued to face challenges with over 10 injuries. He suffered back problems, concussions, had knee surgery, sprang both wrists, broke an ankle, and suffered an elbow injury. As he put it, he got “banged up.” But in the end, he proved he was “bad to the bone.”

For his mom, Myisha Peterson, watching him struggle was exceedingly difficult at times. But in the end, she said her baby boy defied all of the odds.

“It’s been a great journey, and an exciting one,” Myisha Peterson said. “At times, it was kind of rough with all of his injuries. When everybody else thought, ‘okay, this is going to be it. He isn’t going to play this anymore,’ he always bounced back faster and better than what everybody expected.”

When it came to bouncing back, Peterson was able to dominate on the gridiron. He said football quickly became his favorite sport.

“It’s the only time you get to go out there and express yourself without any punishment behind it,” Peterson added. “You can take out your anger and you can just fly around, and I just go out there and fly around and have fun with my teammates.”

With high energy and determination, Peterson was able to finish out his final season of football. As he prepares to graduate, he is now looking forward to focusing on track in college. He will go to Texas Southern and he hopes to make a life for himself in Texas. But Peterson said he will always remember where he came from.

“Clay-Chalkville was the first school that I got to experience new things,” Peterson said. “It really opened me up to a lot of new things and I just got to meet a lot of new people. It’s where I started taking sports really seriously. I really found my true self here.

Myisha Peterson will miss her boy. But she knows she did what she could to help him get to where he needed to be.

“It was a very proud moment to see him excel as he did,” Myisha Peterson explained. “To see his determination, his motivation, and just his will to not give up. It was something that he had in himself. We were there to push him, but we didn’t have to because he would push himself.”

Peterson said she has always made sure she wasn’t pushing Kameron to do what she wanted him to do, but rather what he had a passion for.

“Once he figured out what made him happy, I pushed him to do that,” Myisha Peterson explained. “With me, I know I have always went hard at whatever I loved. So, once I knew what it was that he had a passion for, I knew that it would be something that he would go really hard for. It was something that he wanted, not just what I wanted.”

If not for the love of his dad and coach, on and off the field, Antoine Arrington, Peterson said he doesn’t know where he would be. Arrington said the same thing about his son.

“I can’t tell you how proud I am,” said Arrington. “He has been a joy to watch. His accomplishments were all him. The support system that he had showed, and it pushed him. When he said he was not wanting anybody to be disappointed in him, he was serious about that.”

Arrington said it was hard to watch his son hurt and go through rehab, but he said it has been rewarding to see him fight and accomplish so many things.

“All of the rewards that he received this year are just a testament to how hard he worked to get them,” Arrington reflected. “So, it’s been fun to watch but I am going to miss it.”

Peterson’s nine-year-old brother, MJ Watson, will miss him, too. He’s been watching his big brother’s every step.

Before he packs up and moves away, Peterson has some great advice for all those younger kids who have looked up to him for so many years:

“I would say if you want to get somewhere in life, stay on top of everything you need,” Peterson said. “I know, when I was a kid, I had a lot of dreams. When you get older, don’t let that younger you down. Keep your dreams and work hard for those and make a good life for yourself.”