Lines for new voting precincts in Trussville drawn: Where will you vote?

TRUSSVILLE — After experiencing overcrowding at some voting locations during the 2020 Presidential election, the city of Trussville has added two new voting precincts for future elections.

The city has nearly 20,000 registered voters. In 2020, people were forced to stand in line for hours, particularly at the Trussville City Hall location. The line grew all the way to the railroad crossing on South Chalkville Road at one point and local restaurants brought in free food for people waiting to cast their ballots. 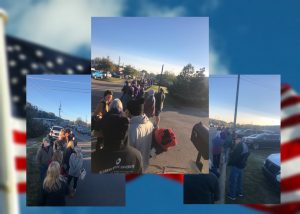 Choat said after that heavy turnout, he, along with City Clerk Dan Weinrib and Jefferson County Commissioner Joe Knight took the issue to Jefferson County Registrar Barry Stephenson. The new lines were drawn for each voting precinct.

Choat said City Hall had over 5,000 voters assigned to that location and now it will be just over 2,500.

Registered voters in Trussville will receive a new voter registration card clarifying where their voting precinct will be, before the next election.

Choat said he would’ve like to have seen a voting precinct put on the South Chalkville side of town, but there was not a location large enough that was ADA compliant.

Addresses of each location are: