TRUSSVILLE — A company has started work on a mural that will be on the wall at the Trussville Public Library.

Andrew Tynes, the owner of Mammoth Murals & Signs, said the mural should be done by Friday, May 21.

The mural is a part of an effort to add murals throughout the city of Trussville. Gray Car Murals, a non-profit 501(c)(3), was established by Marc and Callie Ward.

The library mural is the first project for Gray Car Murals. It was designed by Callie Ward, who is also the art teacher at Magnolia Elementary, is a scene showing a woman enjoying reading under a “book tree.” 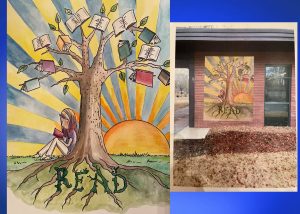 Renderings of the mural for the Trussville Public Library. The mural will be about 12’ high and 8’ wide. Photo: Gray Car Murals Facebook Page.

The Friends of the Library and the Library Board were a big part of raising the money for the library mural, according to Marc Ward.

Ward said he is in the process of reaching out to building owners in downtown Trussville so that his vision can benefit the city even more. Tynes said he hopes to be a part of that process.

Mammoth Murals & Signs installed a mural in Leeds that Tynes said he would like to recreate for Trussville.