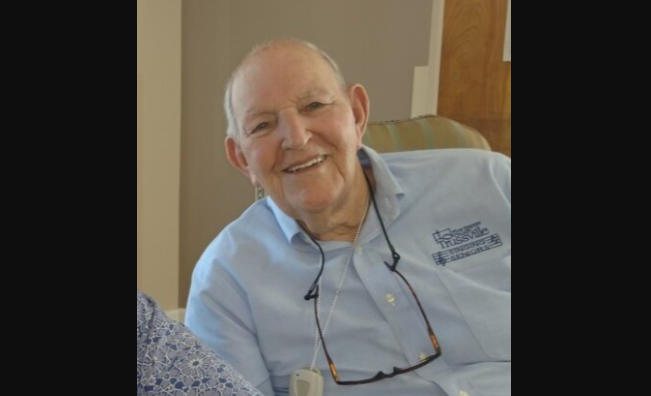 Posted By: Erik Harrison: May 29, 2021In: Obituaries
Print Email

He was the baby in a family of four children. His brothers Edward and Shannon preceded him to Heaven. His sister, Lillian, is 102 and lives in the Huntsville area. Bill went Home to our Lord on May 24, 2021 at the age of 96. Bill grew up in Woodlawn and moved to Trussville with his family as a young man.He served faithfully at First Baptist Trussville, where he was a Deacon Emeritus.Bill had many admirable traits. He was a Patriot & Proud Member of THE GREATEST GENERATION. He:

Enlisted in the US Navy prior to graduation from Woodlawn High School. His mother had to sign enlistment papers for him to the join Navy.

Served as a Waist Gunner aboard a PBY Coronado Sea Plane – transporting wounded troops from Saipan to Hawaii. Bill Dickinson married Leslie Jo Carter on August 16, 1948, as soon as he returned from the war.  They eloped with their parents’ blessings. He then became a diligent Sales Supervisor & Route Manager for Barber Pure Milk Company.

His kids remember Daddy going to work in white uniform and thought he was a doctor. They do not remember him ever missing work, even the day after he had multiple teeth pulled. Most of all, Bill was known for his love of Jesus, and strength of faith. He wore a great big smile, and lived life listening to his generous heart.

He had boundless energy, an interest in life and he showed his family that he loved them. He LOVED Jesus, Leslie, their kids and Leslie’s Chess Pie. She baked his Mama’s recipe.  He and Leslie hugged and kissed every morning.  He would look her straight in the eyes and tell her daily, “I love you more today than I did yesterday, darling.”

He looked at God’s Creation with awe and was often heard to say, “Love It! Love it! Love it!”  Bill loved traveling and being at the beach with family.  He would look out from their “Baker’s Dozen” Condo in Destin and say, “See all that water?  [Yes] That’s just the top of it.”

He liked to make people smile.  The family imagines Bill’s delight in seeing Jesus and his thrill in being with Leslie again, for eternity. Bill had and shared hope. At age 87, he told the Deacons, “Let’s keep building and growing!”

He lived life to the fullest as he mentored and encouraged many.  He approached life with a positive attitude.  He cheered loudly at countless grandchildren events – plays, volleyball, baseball, basketball, & football games.

Visitation is from 2:00 – 4:00 PM, on May 27, to be followed by a Celebration of Life service at the First Baptist Church, Trussville, AL.  The family will have a graveside service earlier.  Funeral arrangements are by Jefferson Memorial Gardens, 205-322-0543. If desired, please make donations to Trussville First Baptist Church.