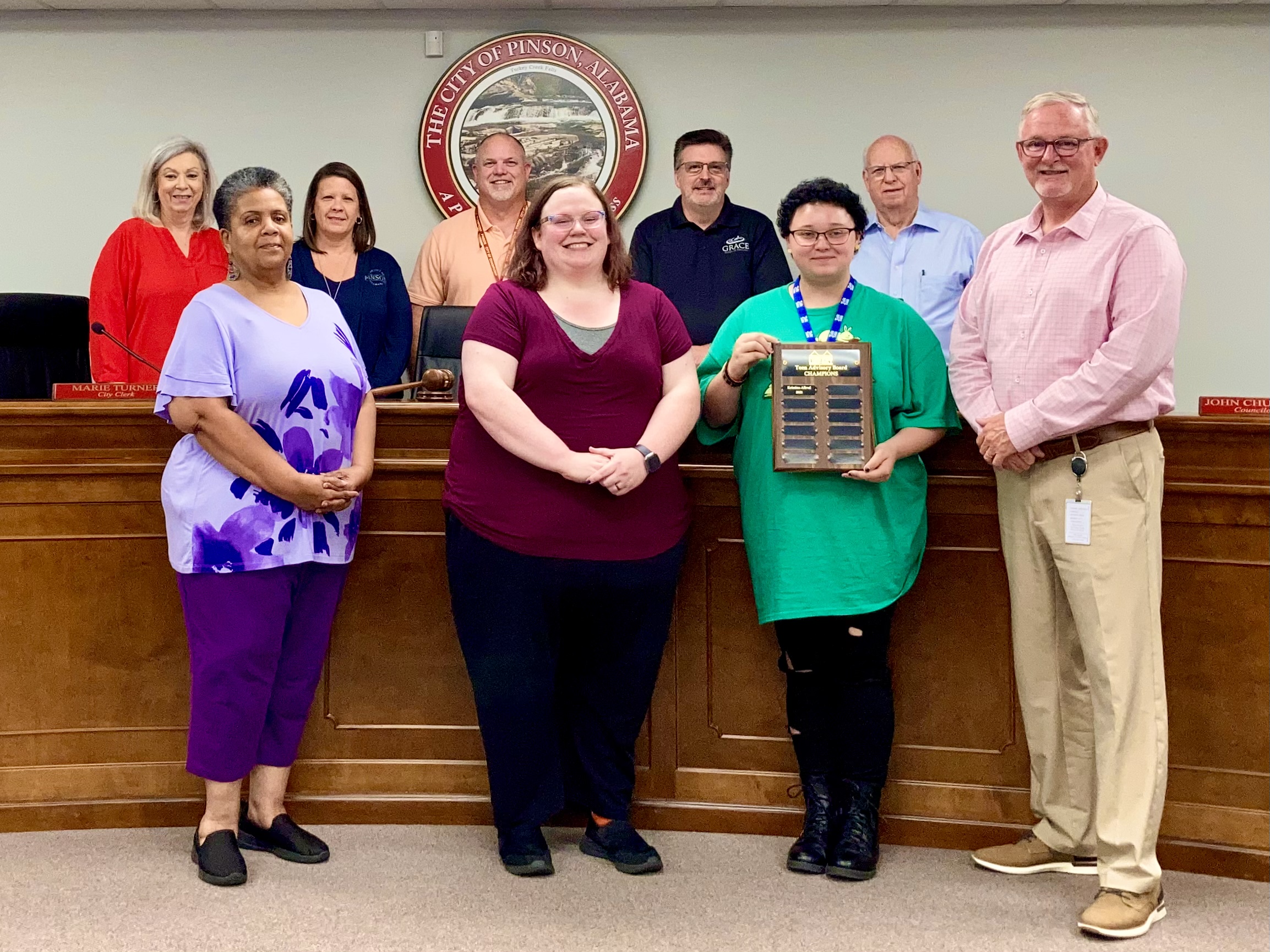 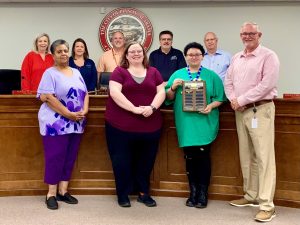 “A little bit about the Teen Library Board (TAB), it’s a collection of 6th-12th graders who help the library by volunteering …,” library director Allison Scanlan said. “We’ve had several wonderful members over the years, but 2021 is the first year that we’ve had a graduating, active participant on TAB. It’s my honor to name Kristina Allred as Pinson Public Library’s very first Teen Advisory Board Champion. Kat has been a member of TAB for over four years. In that time, she has contributed 168 hours of volunteer service at the library. She is a leader in the group.”

Scanlan said that the library will have a “perpetual name plaque” in the library’s Young Adult room for Teen Library Board Champions. Allred’s name is the first to be displayed on the plaque.

Additionally, Scanlan announced that the Pinson Public Library Summer Reading Program kickoff will be this Saturday at the library from 10 a.m. until 12 p.m. The theme will be Pinson City Beach and there will be an inflatable slide, food truck, and other activities for the children.

“We do appreciate the library and we hope that everybody in the public will come back out to the library, participate in a greater way,” Mayor Joe Cochran said. “It’s not something to be taken for granted. A lot of people around this country don’t understand the need for a library. I invite everybody to come to the library and see why there’s a need for the library.”

Scanlan said that library usage has actually gone up in the last five years from what it has been in the last 20 years. 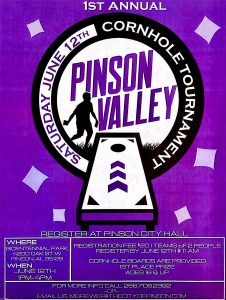 Pinson Parks and Recreation Director Matt Nixon announced that on Saturday, June 12, the city of Pinson will hold its first annual Cornhole Tournament at Bicentennial Park. The event, which is for ages 16 and up, will last from 1 p.m. to 4 p.m. Two-person teams can register at Pinson City Hall for $20/team. There will be a first-place prize for the winning team. For more information, call (256) 706-2392 or email mbrewer@thecityofpinson.com.

“We are tasked with creating a budget based on what we believe our revenues to be,” Cochran said. “You base that on past history as best you can. Some things are pretty solid; some things are a little more variable like sales and use tax. … We also are required by state statute that we can’t budget any more than 90% of our expected revenue. The budget you see before you is a little under 88% of the expected revenue, trying to stay true to that concept.”

Councilor Dawn Tanner suggested scheduling a work session for the council to look through the budget. The council agreed to schedule a budget meeting on Tuesday, June 15, at 4 p.m. The meeting is open to the public.

“Feel free to stop by if you want to see how the wheels turn,” Cochran said.

The council unanimously approved a resolution authorizing the mayor to file for a referendum annexation action in the probate court of Jefferson County regarding the full annexation of the Deerfoot Pointe subdivision.

“What we’re talking about here is doing a referendum, which is an election, if you will, for the Deerfoot Pointe subdivision,” Cochran said. “So, it basically would encapsulate the entire subdivision.”

A city can annex an entire subdivision by referendum when the city has received requests for annexation from a minimum of 60% of the homeowners in the subdivision.

The referendum will be held at one of the homes in Deerfoot Pointe on Saturday, June 26, 2021, from 7 a.m. to 7 p.m. and is open to registered voters.

Several Pinson residents were in attendance at the meeting in order to address concerns regarding trash and litter in the city. The council held a discussion regarding the formation of a Keep Pinson Beautiful Project.

“We want Pinson (residents) to be proud of where they live,” Tanner said. “What we would like to do is just start adding some signage about keeping Pinson beautiful. Possibly getting a beautification committee together. Maybe … doing a beautification award, whether it’s a business or a home or whatever.”

Cochran also spoke about having “litter bags” made up that the city can pass out to citizens and said that the city deputies have been asked to write tickets to anyone they see littering within the city of Pinson.

“When you ride through our communities and neighborhoods and you see people not caring about where they live, throwing trash in the street, not mowing their grass and things of that nature, they have to understand that you chose to live in a neighborhood; you need to participate in being a good neighbor,” he said. “You need to participate in helping maintain property values for each other. It’s kind of what we do as a society and a community. We seem to have backslid a little bit in those concepts in recent years and what I want is for Pinson to pull back together and talk about how great we are.

“We approved on April 15, $20,000 to the Turkey Creek Nature Preserve to buy furnishings and things of that nature for the new pavilion,” Cochran said. “Well, when they bought all the furnishings they thought they needed, they came out at $10,574.94, well under budget. What they have asked us … they are about $20-22,000 in the hole and (BCS Southern Environmental Center director Roald Hazelhoff) asked, ‘Can we use that money that we did not spend on furniture to do some of these other items.'”

The council agreed unanimously to allot Hazelhoff and the Turkey Creek Nature Preserve the remainder of the original allotment.