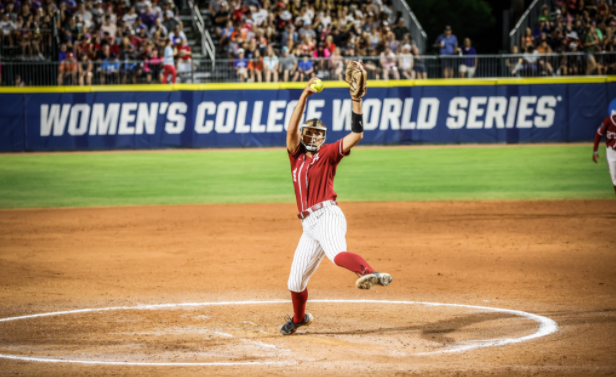 OKLAHOMA CITY (AP) — Montana Fouts threw a perfect game with 14 strikeouts on her 21st birthday, and Alabama defeated UCLA 6-0 on Friday night to advance to the semifinals of the Women’s College World Series. 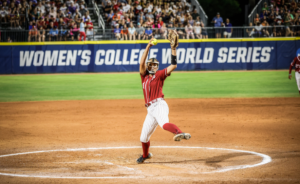 There had been four individual perfect games and one combined in World Series history before Fouts’ gem. The most recent was by Courtney Blades of Southern Mississippi in 2000.

As the game progressed, Fouts tried not to focus on the situation.

“I honestly wasn’t really thinking about it,” she said. “I don’t think you can think like that as a pitcher, as a player or even in the stands really, because I feel like I’m a superstitious person. But I don’t know — I was just locked in each pitch because I know that one swing away, they have momentum.”

The Alabama section of the crowd, and even a fair number of UCLA fans, stood as Fouts took the circle in the bottom of the seventh. She opened the inning by striking out U.S. Olympians Bubba Nickles and Rachel Garcia swinging. The Bruins’ final batter, Aaliyah Jordan, flied out deep to left field.

Fouts threw 65 of her 95 pitches for strikes against a team that entered the game with a .319 batting average.

“She’s a great pitcher,” UCLA shortstop Briana Perez said. “We went in with a game plan, we let her get ahead in a lot of counts and didn’t make an adjustment throughout the game, and so here we are.”

Garcia, a two-time USA Softball Collegiate Player of the Year, was pulled in the sixth. She gave up five earned runs on seven hits and struck out three. She threw 105 pitches, one day after throwing 112 in a win over Florida State.

The second-seeded Bruins (47-6) will play Oklahoma or Georgia in an elimination game on Saturday night.

Fouts gave up one run and struck out 16 without a walk against Arizona on Thursday. She has two complete games with 30 strikeouts and no walks in World Series play this year.

“Didn’t think she would get better from yesterday, but she did,” Alabama coach Patrick Murphy said. “And these are good teams. I mean, this is the king of the Pac-12, the Pac-12 champions, and to throw a perfect game against legendary UCLA is something else for a kid from a small town from northeast Kentucky.”

The Crimson Tide got insurance in the fifth when Kaylee Tow hit a three-run homer to make it 5-0.

After that, the Tide focused on finishing the job for Fouts.

“I think I realized about the fifth inning that she was throwing a perfect game, but we all know the unwritten rule of never saying that they’re throwing the perfect game,” Tow said. “I think we were just trying to be calm, cool, and collected, make the plays, to keep that for her and allow her to have that moment. So no one wanted to talk about it until the end, but of course we went crazy there at the end for her.”