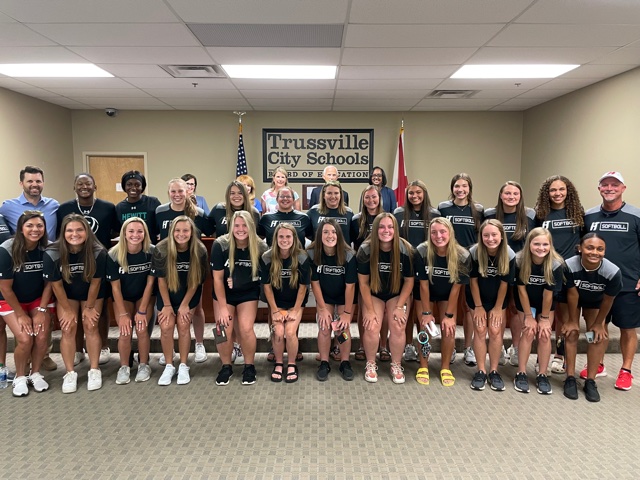 The Hewitt-Trussville softball team was recognized for its Class 7A state championship during the TCS board meeting on June 14, 2021. Photo by Erik Harris

TRUSSVILLE – It was a busy Monday for Trussville City Schools, as the board met for its June board meeting. 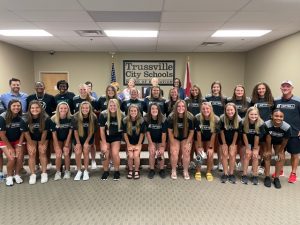 The Hewitt-Trussville softball team was recognized for its Class 7A state championship during the TCS board meeting on June 14, 2021.
Photo by Erik Harris

The school system took time to honor several individuals on Monday night, including retirees from both the 2019-20 and 2020-21 school years. Last year’s retiring class had not yet been recognized, due to complications created by the COVID-19 pandemic.

Several of the former employees shared memories of their time in Trussville, some of which dated back more than 30 years. Payge Chambliss recalled the one red light located on Highway 11 in her early years as an educator in Trussville.

“But what I will mostly leave with is just knowing how many first-graders I got to be with, and I do miss that,” said Chambliss. “I miss their sweet faces.”

Some of the goodbye messages drew laughter, some of them drew tears, and each of them stretched smiles across the TCS board room.

The Superintendent also invited the Class 7A state softball champions in for a moment of recognition. Hewitt-Trussville’s girls captured their second consecutive AHSAA title on May 21 in Oxford, blistering second-ranked Fairhope 16-4 in the winner-take-all championship bout.

Head coach Taylor Burt thanked the Trussville community for its support of Hewitt softball. Senior third baseman Jenna Lord and sophomore second baseman Hannah Dorsett also took turns speaking on behalf of the team, which finished the season with a record of 49-3-1.

“We knew it from the beginning,” said Dorsett of the dominant championship climb. “There’s not many words that can describe this group of girls; I think our record speaks for itself.”