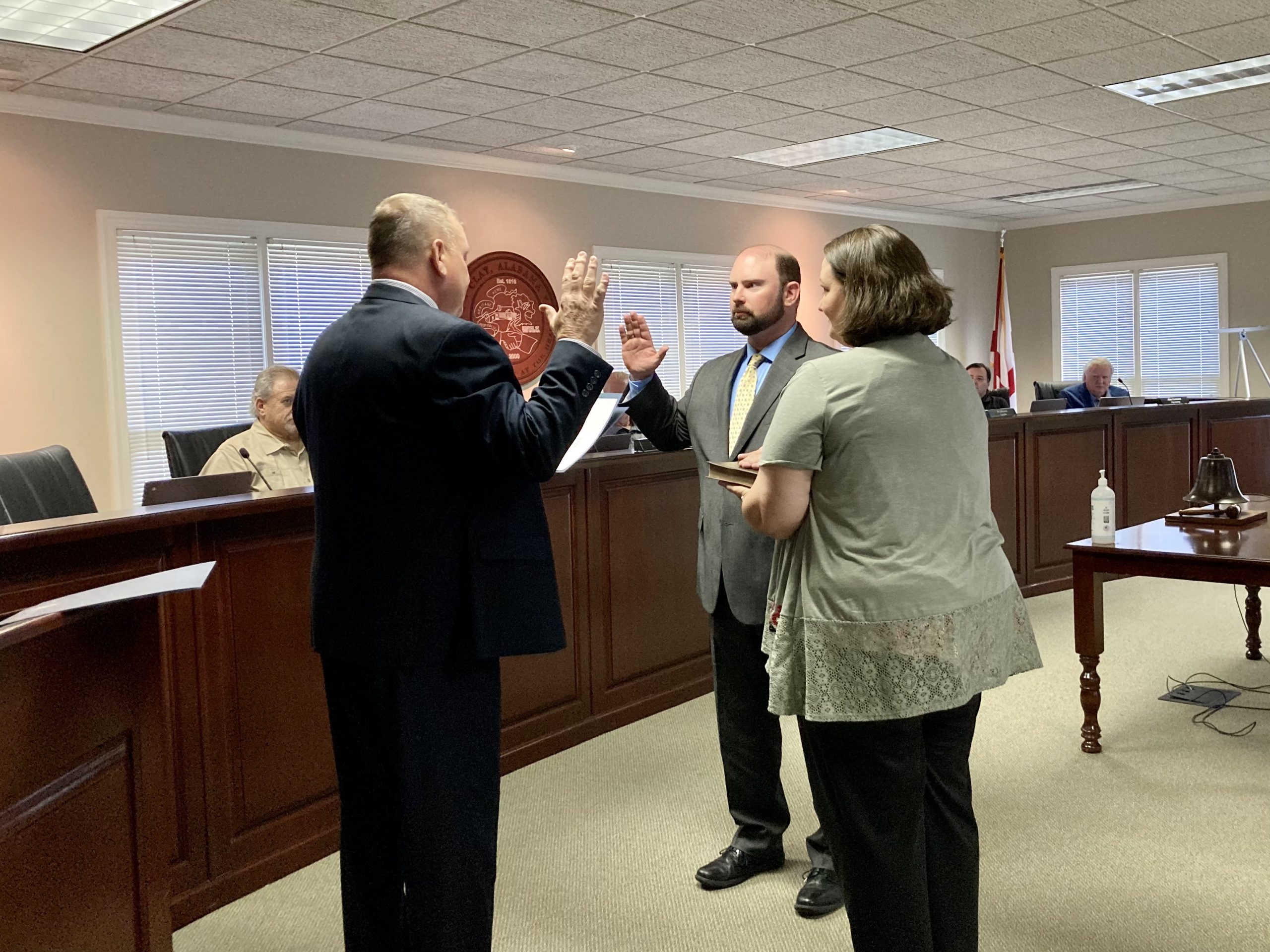 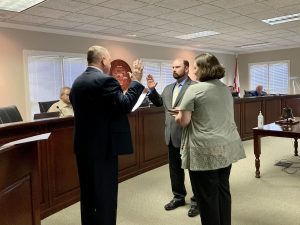 “I’ve been knowing LeWayne for several years,” Mayor Charles Webster said. “…He actually come to me over a year ago and he wanted to serve in some capacity, so he was appointed to the Planning and Zoning Commission. Then, he actually run at the last election and here he is going to get to serve out Ben Thackerson’s term. So, we’re glad to have him on board.”

Thackerson and Councilor Dennis Locke both resigned from the council on May 25, due to moving out of city limits. During the June 15 council meeting, Councilor Chris Nail was appointed to Council Place 5, to fill the remainder of Locke’s term. Allen will be serving in Council Place 3.

“First just let me say how excited I am and thank you, Mayor, for nominating me and having the support from our city manager Ronnie Dixon and the rest of the council,” Allen said. “This is something that I feel the Lord laid on my heart to do. …Now, I’ve got some big shoes to fill. Dennis Locke and Ben Thackerson were great city council people and I really appreciate their service to this city. It’s nice to think of yourself as a leader in the community, but that’s not how I view myself. I’m a servant. That’s what I’m here to do; I’m here to serve the people of Clay.”

City Manager Ronnie Dixon announced that the city of Clay will be holding a Fourth of July fireworks show Saturday, July 3, around 9 p.m.

“It is a regular fireworks show — same people that do Thunder on the Mountain,” he said. “You’ll be able to see it from anywhere around (Clay-Chalkville) high school. So from the Pig parking lot, McEnally parking lot, any of the school parking lots, and you’re welcome to come in and sit at the football stadium and see them there.”

Those who have access to a radio can tune into channel 90.6 for the soundtrack broadcast. A 90% chance of rain has been predicted for the time of the show, but the fireworks show will take place regardless.

“We have plenty of people in place because of the summer reading program, so everybody’s just going to take a step up and we have everything covered,” Dixon said. “We appreciate Holly’s service for us, especially going through and getting the new library set up. She’s done a really good job for the city and we hate to see her go, but congratulate her on her new endeavors.”

The city council held a public hearing for the condemnation and demolition of unsafe buildings/structures at 6556 Clay Palmerdale Road.

“This piece of property is better known as the house that’s at the end of the driveway to the Clay United Methodist cemetery,” Dixon said. “A lot of people just know it as the yellow trailer. … We get a lot of complaints, and continual, but we get the most complaints anytime that there’s a funeral or a burial there at the cemetery. … From the standpoint of whether or not the property is a nuisance to the city, the staff has no question in declaring it a nuisance.”

Dixon added that there is an issue concerning the ownership of the property, which is deeded to a Mr. James Lambert.

“We’ve spoken to Mr. Lambert last week,” Dixon said.”… He was under the impression that he deeded and left the property to his daughter. Subsequent to that, his daughter has passed away and his granddaughter should be the rightful owner of that property. However, Mr. Lambert never deeded the property through the probate court to his daughter. So, someone in 2019 and 2020 paid the back-taxes. I think all of you know that does not give you ownership … it may have three years before they can apply for a tax deed, and then three years after. So, it’s a six-year process. During that six years, the owners … have the opportunity to redeem that property for the taxes that other person paid.”

Two men, Leon Shaw and Craig Michael, spoke during the hearing against the condemnation of the structures at 6556 Clay Palmerdale Road. Both men asserted that James Lambert passed away 15 years ago and therefore the city could not have possibly spoken to him last week.

“I bought that house that he speak of, 6556 Clay Palmerdale Road, in 2018,” Shaw said. “It was seven or eight years behind on property taxes when I bought it. I work with a law firm environmental attorney group … Mr. James Lambert is dead. His daughter is dead. His granddaughter is living. I contacted her … she said, ‘I don’t want nothing to do with that property; I don’t have time for that.’ … So, I got the property. That was 2018, May of 2018.”

“I didn’t get the total process of what need to be done to fix this property, because I would’ve fixed it,” Shaw said. “I have access to a bunch of contractors and we have the funding to fix the property. But what I could see when I checked it, I didn’t see anything broken on the house, anything like that, but I did see a lot of debris and a lot of trash in the yard, which I instructed Mr. Michael to clean up.”

Shaw said that he spoke to the city’s building inspector, as well as City Manager Ronnie Dixon.

“All I wanted from them, the only thing I want is tell me what the problem is,” Shaw said. “They couldn’t do that. … The inspector never told me what they need me to fix. We have the money, we have anything to fix any problem.”

Shaw added that he would be willing to pay an engineer of the city’s choice to look at the structure, which he said is sound.

Under unanimous consent, the city council unanimously voted to approve Resolution 2021-12, condemning and authorizing the demolition of the structures at 6556 Clay Palmerdale Road.

The council also held public hearings for weed abatement at 7535 Old Springville Road and personal property abatement at 5300 Baggett Drive. No one spoke at either of those hearings and the council unanimously approved Resolutions 2021-13 and 2021-14, authorizing the abatement of the nuisances on both properties.

Additionally, the council unanimously approved Resolution 2021-15, authorizing the city manager to file with the probate court of Jefferson County for a lien against 5874 Brenda Drive for the abatement of that property.