SPRINGVILLE – The Springville City Council honored two city police officers, a St. Clair County deputy and an Ashville police officer that delivered a baby on the side of the road. 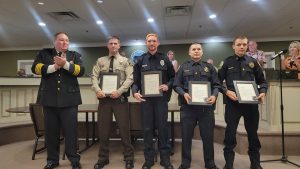 During its regular meeting on Monday, July 19, 2021, the Springville City Council passed a resolution commending the officers’ actions. City Attorney James Hill read what Chief Wayne Walton wrote on a framed certificate for each officer.

“The general public is often unaware of the tremendous efforts and sacrifices made by our men and women who have devoted themselves to such an endeavor,” Hill read. “However, from time to time, it becomes necessary, in good conscious, to conspicuously acknowledge the acts of these individuals, so as to recognize their tireless devotion and to display our public appreciation.”

The officers had the father pull up to the Springville exit, where they began to coach the mom-to-be through labor.

“She’s in active labor, she’s screaming,” said Officer Martin. “And the baby’s coming. We just tried to calm her down and told her when she was ready to start pushing and she did.”

The officers helped the mother and the father deliver the child. The fire department quickly responded and was able to get the baby the care it needed to be taken to the hospital.

Deputy Wiggins said when the call came in, they were all nearby because they had just wrapped up another call in the area.

“When we got up there, she was screaming,” Wiggins said. “It’s something you don’t really prepare to encounter every day.”

Wiggins said police had to do the best they could while waiting for paramedics to arrive.

“We all sat there and we came together and we were able to have a successful delivery,” Wiggins added.

This was the first time Deputy Wiggins witnessed a birth.

“You get to see a newborn baby,” he explained. “And of course, when it came out, there were some issues with it breathing. I was nervous and I wasn’t the dad. But just to see that baby. When I was in the back of the ambulance, I remember holding it and scratching its back to get it to cry. And you could see the blue come out and the pink coming to the baby.”

Wiggins said the three agencies always come together, like family, and that’s what they did the night of June 13.

Springville Police Chief Wayne Walton said there is something special about all officers of law enforcement in St. Clair County. He said no matter what badge or uniform first responders are wearing, they come together when it counts.

“St. Clair County is a unique county because we do all come together as one,” Walton said.

Walton said he doesn’t know why there is such a close bond between first responders, but it is evident.

“It don’t matter if you’re a St. Clair County deputy, Springville, Odenville, Ragland, Pell City, Moody. It don’t make no difference,” said Walton. “For some reason, this county and these officers come together and work really close together. Sometimes you go to other counties and you don’t see that. But there’s a bond in this county.”

When it came to being recognized for going above and beyond, the officers were humble in their responses.

“We all appreciate it but we sign up for this job and we give an oath to serve and protect,” Wiggins said. “When we get out here to make a difference like this, it’s something that we work every day to do. You know, all across the country, events like this are happening. It may not get put on the news but it’s happening all around us.”