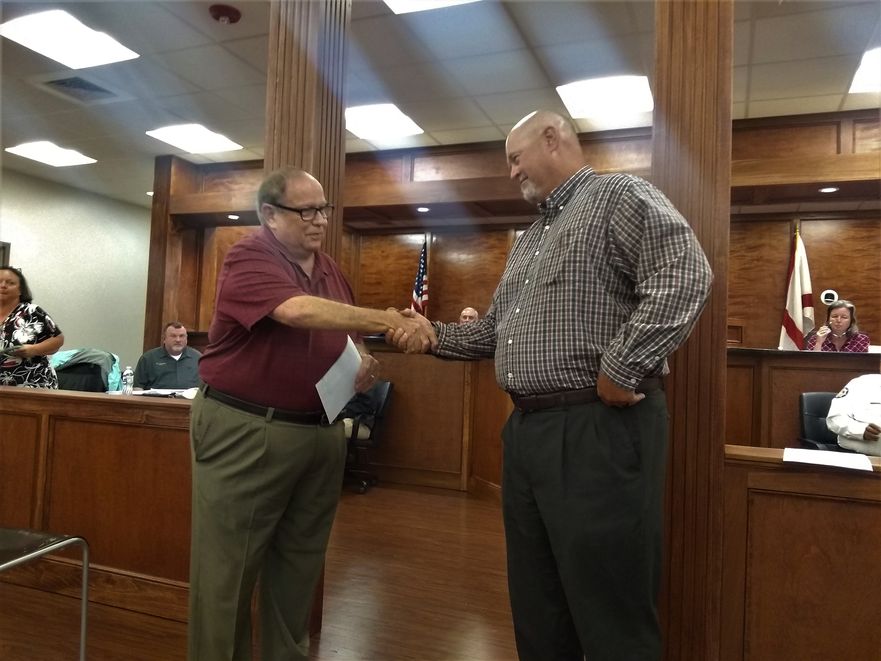 LEEDS – Leeds Mayor David Miller presented a $5,000 check to Jerry Hood, who is the head coach of the Leeds High School football team, at a regular meeting on Monday, July 19. 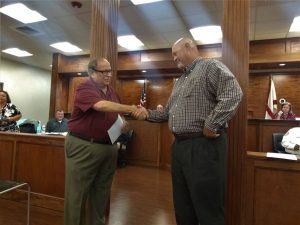 “You’re doing a whale of a job where many people thought it was impossible,” Miller said to Hood before handing him the check. Miller congratulated him on his work with the program and with the season.

Hood said that the money will go to “phase 2” of the program’s equipment upgrade, as well as strength and conditioning equipment.

When the regular meeting began, the first item that the council took action on was to authorize the preliminary statement and refinancing of the city’s general obligation debt.

“What this is about is the interest rates and bonds are at a point where even though everything that we have is has been refinanced previously and we’ve taken money out without extending the term of the bond issue and saved the taxpayers a ton of money – several million dollars – by refinancing bonds at lower interest rates,” Miller said.

He added that the city is at a point where they can refinance the current bond and take money out at a lower interest rate but keeping the terms the same. Councilman Johnny Dutton asked if there was a detailed expense report, to which David Langham from investment bank Frazer Lanier Company said that one will be provided when the city gets its credit reapproved and prepares to enter the market.

He said that the city is currently paying an interest rate of just over 3% but it is projected that this can be lowered to 1.8%. During his presentation, he added that the city can use funds for various projects such as parks and recreation projects, infrastructure and others but can’t be put into city payroll or into the general fund.

After discussion, the council unanimously voted to approve the resolution. A copy of the resolution, 2021-07-06, can be seen in the agenda packet of the city’s website.

Later in the meeting Leeds Police Chief Jim Atkinson made a presentation to the council to urge them to purchase a Vigilant Solutions automated license plate reader. Atkinson described it as three cameras that would be put on the vehicle of Officer Jake Turnbloom, who has been recognized for his involvement in various drug busts with his K-9 unit.

The system comes at a cost of $15,615 and is a one-time fee that comes with training. The reader captures images of license plates that pass by the officer’s vehicle and will scan them if it is listed as a vehicle that has been stolen, are missing subjects, sex offenders, wanted felony subjects and others.

Further details can be seen on the city’s agenda packet. The request was approved unanimously.

The council made several appointments during the meeting, including to the library board of trustees. Brent Reeves was reappointed to the board along with new member Susan Miller.

Additionally, the council made an appointment to the water works board. This was Eddie Moore, who was appointed by a four-to-two vote.

“This is the first time an African American has been appointed judge in Leeds,” Miller said.

Stone will be sworn in later this week.

Stone, who had previously served as the public defender, won by a three-to-two vote with Councilwoman Angie Latta abstaining. Filling in Stone’s former position as public defender is Brooks Burdett.