LATEST NEWS
Home Lifestyle ‘I have tried to be the man that he is,’ Trussville Police father and son learn life lessons from each other

‘I have tried to be the man that he is,’ Trussville Police father and son learn life lessons from each other

“Of all the titles I’ve been privileged to have, ‘Dad’ has always been the best.” – Ken Norton

TRUSSVILLE – Officer, Sergeant, Jailer, Bomb Tech…Those are among the many titles that Trussville police officer Mike Roberson has had in his day. “Guppy” is his nickname, a title he was given back in 1981 when he was working in a training car for the Birmingham Police Department. But “Dad” is the one he is most proud of. It’s a title he has always taken seriously. That effort has not gone unnoticed and far beyond his retirement this year, his legacy will live on, through his son, who is also a Trussville Police officer.

Officer Sean Roberson has already been a valuable asset to the Trussville Police Department. He has protected and served the city since June 8, 2019. He was hired exactly 17 years, one week, and one day after his father came to Trussville. Sean Roberson has not only taken a large amount of drugs off the streets, but he has also served as an example for a national company, Flock Safety, on what to do in certain situations.

That success and drive may have come naturally for Sean Roberson, but his greatest influence has been his father.

“I’ve always looked up to him,” said Sean Roberson. “I just want to be the man that he’s been and do the right thing and treat people fair.”

His father has seen a lot of things. After graduating from Huffman High School, Mike Roberson knew he wanted to be a police officer.

“I had a neighbor across the street growing up who was a policeman,” Mike Roberson said. “I also had some guys I grew up with that ended up being policemen.”

In 1976, he began to search for a job, but because of a hiring freeze and other challenges, he was unable to get a job. He went to the University of Alabama for a short time then transferred to Jefferson State, where he earned his associate’s degree. It wasn’t long before he used a neighborhood connection, in the Roebuck area, to get his foot in the door.

“So, finally, Bill Myers, the police chief, lived down the street from me,” Mike Roberson remembered. “My dad told me that, so I said, ‘Well, I’m going to go down there and talk to him.’ I knocked on the door and I said, ‘I want to be a Birmingham Police.’ He said, ‘Okay.’ I already had my application and all of that in, but it helped.”

Mike Roberson was hired as a Birmingham police officer on August 23, 1980. He was 25 years old. He said during his time learning the ropes, he appreciated the lessons from the older officers the most.

“They always said, ‘They’ll teach you some things in the academy and when you get out, you’ll learn more,” said Mike Roberson. “And mainly it’s just dealing with people.”

And dealing with people who are going through some of their worst times can be challenging. Even now, Mike Roberson, who is 66 years old, said he has faced obstacles in that area. He was admittedly once known to be “quick-to-anger.” But he said it is through his son that he garners inspiration to be a better police officer and a better man.

“Just watching him,” Mike Roberson said. “I’ve learned that sometimes I could grow up.” 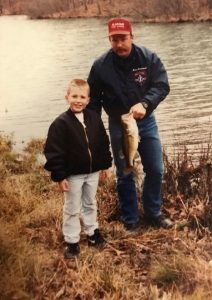 While his son was growing up, Mike Roberson said he strived to teach Sean and his two older sisters the importance of what he did for a living. He never encouraged or discouraged them from entering a career in law enforcement, but Sean was destined to follow in his father’s footsteps.

“When I was a kid, being around him and all of the guys that he worked with and seeing all the cool things they did,” Sean Roberson said when asked what made him interested in law enforcement as a child. “I thought it was cool.”

Sean Roberson said his first memories of his father are when he worked with K9 Officer Duke, AKA “The Wonderdog.”

Mike Roberson said Duke was always gentle with and protective of Sean. After Duke passed away, Mike went to Bomb Tech School. That’s where he was rejoined by a friend from high school, Lionel Wilson. Wilson had left after graduation to join the Air Force, but eventually came back and worked for the Birmingham Police Department. After working together for several years, Wilson transferred to the Hoover Police Department. Roberson said he had a bad feeling when his buddy of many years left Birmingham.

It wasn’t long before he found out Wilson had passed away after falling from a ladder at his home.

“With his dad and his son right there beside him when it happened,” Mike Roberson added. “I went to primary school and high school with him.”

Mike Roberson had many memories with Wilson. In fact, while serving on the bomb squad in Birmingham, they both had a big part in the investigation of the 1998 abortion clinic bombing. On January 29, Mike Roberson was on his way to Trussville to take part in a bomb class when he found out about the tragedy.

“I just happened to be on channel 4, for some reason,” Mike Roberson recalled. “My buddy Lionel was coming from Peacock Lane and he heard the blast. He got there first.”

Mike Roberson, who was the leader of the bomb squad at the time, said after hearing about the bombing on the radio, he headed to the scene where another Birmingham police officer, Robert “Sande” Sanderson, had been killed.

Through the heartbreak and losses he has experienced, Mike Roberson has remained positive and alert while on the job. Perhaps that is why his son is the same way.

Sean Roberson got an early start on police training. His father took him to training with him as early as 10 years old. Sean got to be “the bad guy.”

“It was a unique experience because not a lot of people can say they have done that or have been a part of that,” Sean Roberson said.

“We worked about every weekend,” Mike Roberson said. “Football games, runs, whatever. So, I wanted us to interact more.”

After trying out a career in pest control, Sean Roberson decided to take the leap and become a police officer. He worked at UAB for four years before coming to Trussville.

Trussville Police Chief Eric Rush said from their laugh to their mannerisms, he has noticed a lot of similarities between Mike and Sean Roberson.

“They’re so much alike,” Rush said. “When I interviewed Sean, it was like I was interviewing Mike. It was like a carbon copy. The cool thing about it is you’ve got Mike at the end of his career and Sean at the beginning of his.”

With his early experience and military training, Sean Roberson came to the Trussville Police Department prepared to make a difference.

“Doing the right thing is what sticks out in my mind,” Sean Roberson said. “And like I said, because of him, I try to make the best decisions and do the right thing.”

During his time working in the Jefferson County Jail, Sean Roberson said he learned a lot about patience.

“If you go there with a positive attitude and do your job, you’re just fine,” said Sean Roberson.

Mike Roberson, who currently works in the city jail, will retire from the Trussville Police Department at the end of 2021. With him, he will take a lifetime of memories…Memories of lessons he has taught others and lessons he has learned from his only son.

“Sometimes, I can be a little gruff and try not to be that way anymore,” said Mike Roberson. “Not just with him but with anybody, since he’s taught me that. I’ve never seen him get angry.”

The older Officer Roberson hopes his son can experience the best part of having a career in law enforcement.

“I hope he gets to have the same adventures that I had,” said Mike Roberson. “I’ve enjoyed my career. I’ve done a bunch.”

The relationship between this father and son is rare. The love and respect they share is evident. At the end of the day, Sean Roberson knows his bond with his father is something to cherish.

“I just want him to know how much I have looked up to him,” Sean Roberson said with tears in his eyes. “I have tried to be the man that he is. Even though him and my mom are divorced, he always tried to do the right thing with us. I love him no matter what has happened. I just always looked up to him. His dad was a great dad, too.”

And in following with tradition, Sean Roberson has recently become a great father himself. He and his wife, Katie, welcomed Kitty Jean into the world in August of 2020. Katie Roberson said she is thankful her husband has already been an incredible example to their daughter.

Although he says he does not want his daughter to become a police officer, he does hope he can be a great father and teach similar lessons he learned from his own dad. No matter what choices his daughter makes in life, it is clear that Kitty Jean’s daddy will always love and protect her, just like his father did for him.