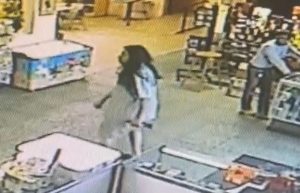 Maria Greguol, whose husband is the the first cousin of Armanda Contreras, 43, believes excessive force was used in the moments leading up to their loved one’s death.

“There are some things that do not go according to what police said in their first statement and the only statement that they have given us,” said Greguol.

After years of publicly supporting law enforcement across the country, Greguol said this case involving her family member has made her feel that changes are necessary.

In that first statement by Birmingham Police, Sgt. Rodarius Maulding said that around 7 p.m., officers tried to stop a vehicle that was driving erratically on the wrong side of the road, in the 9100 block of Parkway East. The driver was later identified as Contreras. Police said Contreras refused to stop and continued to the 8500 block of 1st Avenue North.

Mauldin said the man exited the vehicle and went into a restaurant. Witnesses told police the man “armed himself with a bottle.” As they approached him, officers said the man threw items at them.

The officers deployed their Tasers but were unable to subdue the man, so they tried hand-to-hand techniques, Mauldin said. At that time, the man was able to take one of the officer’s Tasers and that’s when officers fired shots, striking the man. Although he continued to fight, Mauldin said the man eventually collapsed on the scene.

Greguol believes the detail about Contreras being “armed with a bottle” was exaggerated.

“He did not arm himself with a bottle in the store,” said Greguol. “He had a bottle because he was drinking. We don’t know if he was high on something, we know he was drunk.”

The family said they have been dealing with issues with Contreras for a few years. Greguol said he went from being a nice, hard-working man to being argumentative to one day completely changing.

“You go from that to, ‘This is not right,” said Greguol. “He thought somebody was out to get him so, I talked to a lawyer and a psychologist trying to get it figured out. He’s not here anymore. You think, maybe there was something more we could have done.”

The family of Contreras believes that because of mental instability, Contreras put himself in a situation where he would have to face police. But she said he didn’t deserve to die.

“We know he was doing something wrong, and we know he was having a breakdown,” said Greguol. “We also know the force was excessive.”

Greguol said witnesses confirmed to her that Contreras was in distress and was argumentative when he entered the restaurant.

“Per her [a witness] statement, the cops did not reason with him,” Greguol explained. ” They came in, he was throwing stuff at the cops, but they came in directly to do what they came to do.”

Greguol said Contreras did take the Taser from an officer, but she does not believe a Taser is a deadly weapon. Some law enforcement experts say Tasers are considered to be deadly weapons if a suspect takes them from an officer because the Taser could be used to give the suspect the opportunity to take a firearm from the officer.

In this case, Greguol said the officers cornered Contreras inside the store and she believes he probably feared for his life.

“There were four officers with four Tasers,” she added. “I’m pretty sure that four Tasers would’ve brought that man down. Or maybe a shot to the leg. But I don’t have any experience and I’m not trying to be an expert, but all of the shots went to the chest. He was cornered. I do believe there could be several other ways to handle him.”

The lady working in the store told Greguol she heard at least 10 shots. Doctors told the family Contreras had at least six gunshot wounds to the chest area. Greguol said what upset her even more is how Contreras was treated after the shooting.

Even after Contreras died at the hospital Greguol said the family was not allowed to say their goodbyes. His mother was flown to Alabama the next day.

“She just kept saying that they killed him like a dog,” Greguol said about Contreras’ reaction to the shooting of her son. “They shot him like he was just an animal and she said he did not deserve this.”

The family hopes laws can be changed to help families of those suffering from mental illness get help for their loved ones. She also hopes that more law enforcement agencies undergo more training on dealing with mentally ill people.

The family had an independent autopsy performed on Contreras’ body. They are waiting to hear from the Alabama Law Enforcement Agency (ALEA) for more in the investigation.

“After that, the attorney will ask for the body cam video,” said Greguol. “And we will go from there.”

In the statement by Birmingham Police, Mauldin said the officers acted in line with their Use of Force policy, after attempting several non-lethal tactics.

No officers or innocent bystanders were hurt in the struggle. Family members said they are thankful no one else was injured.

If you know someone challenged by mental health issues, go to www.crisiscenterbham.org, or call the Crisis Line at (205) 323-7777.