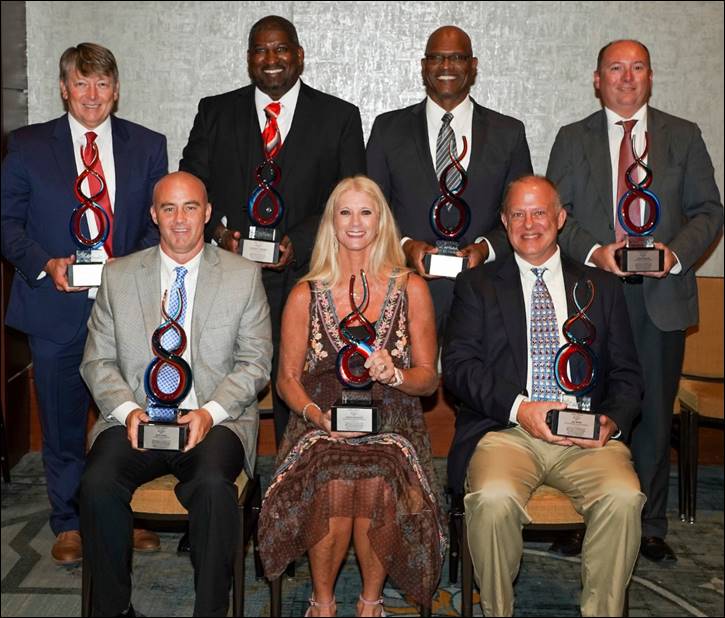 MONTGOMERY – The 25th annual AHSAA Championship Coaches’ Awards Banquet marked the 100th anniversary of the Alabama High School Athletic Association. The banquet was the conclusion of the 2021 AHSAA Summer Conference at the Montgomery Renaissance Hotel and Convention Center. 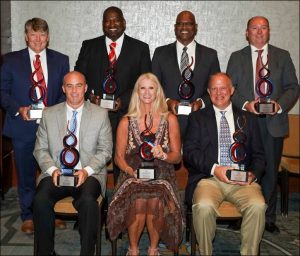 Jamie Ferguson of Bayside Academy in Daphne was honored by the AHSADCA as the AHSAA 2021 Athletic Director of the Year, and Blount High School football coach and athletic director Lev Holly received AHSADCA Past President’s Award.

“We had an outstanding week of professional development, all-star competition and a lot of old-fashioned catching up with old friends,” said AHSAA Executive Director Alvin Briggs, who oversaw his first Summer Conference in his new position since replacing Steve Savarese, who retired after 14 years in the executive director seat on June 30. Briggs, who joined the AHSAA in 2011, served as Director of the Alabama High School Athletic Directors and Coaches Association (AHSADCA) before moving into the Associate Executive Director role at the AHSAA in 2019. He began his duties as Executive Director officially on July 1.

“We are so proud of all our member schools,” Briggs added. “Despite the COVID 19 Pandemic challenges facing our state and nation, we were able to start our schools on time, completed all our seasons and championships on time as member schools worked hard to provide the safest environment possible. They bought in to the best practices and safety guidelines outlined by the AHSAA and its Medical Advisory Committee and the Alabama Department of Health. As Mr. Savarese pointed out many times, we think it would our schools’ and communities’ finest hour.”

The NFHS Network live-streamed the AHSAA Sportsmanship and Championship Coaches’’ banquets. Go to www.nfhsnetwork.com to see the events, which have been archived and can be accessed on-demand.

To check out the AHSAA State Championship Coaches of the Year for 2020-21, go to the following link at the AHSAA Website.

The AHSAA, which unveiled its official “100th Anniversary” logo, plans to honor the anniversary with special events during the upcoming year.