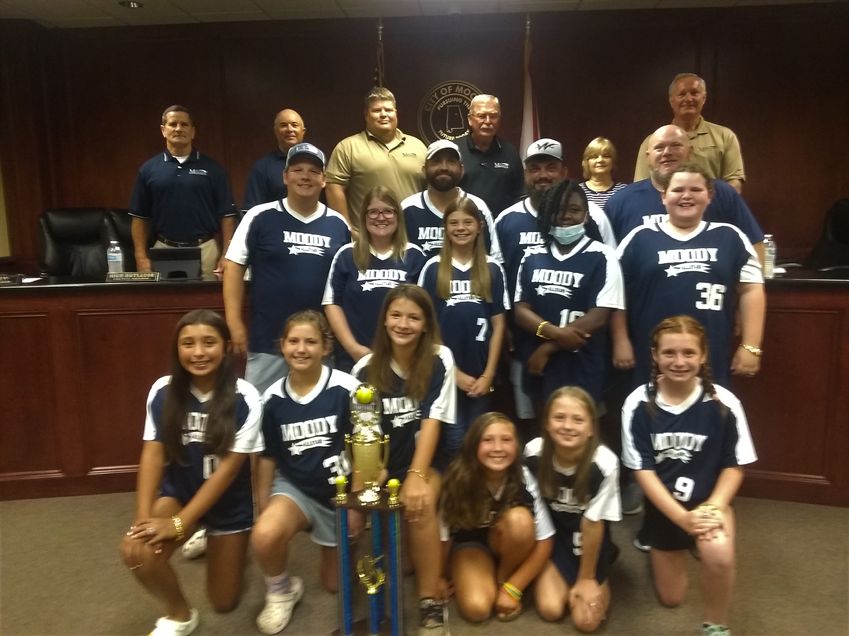 The Moody City Council stands behind the Lady Devils 10U softball state champions at a meeting on Monday, July 26. Photo: Nathan Prewett.

MOODY – At a regular meeting on Monday, July 26, the Moody City Council recognized the Moody Lady Devils 10U softball team that won a state championship. 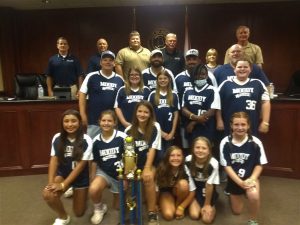 The Moody City Council stands behind the Lady Devils 10U softball state champions at a meeting on Monday, July 26. Photo: Nathan Prewett.

“We’re honored to have the state champions with us tonight,” Moody Mayor Joe Lee said to applause. “It’s not often that we get to recognize so many of our young folks and we’re proud of you.”

The team was present at the meeting with their coach, Ashley Davison, along with coaches Daniel Bowman, Adam Butner, Kevin Butner, Will Griffith and Jacob Davison. A presentation was made by council members Nick Rutledge and Lynn Taylor recognizing the team for their achievement.

A state tournament was held on June 24 where the Lady Devils played six games, resulting in five wins and one loss to the 10U Hoover Boom All-Stars.

Afterward, the council approved a number of requests from Fire Chief Larry Horton and Police Chief Thomas Hunt, including a request from Hunt to approve Ordinance M2012-07-26 concerning the police reserve force.

The reserve force has been in place for some time in the city, but the ordinance was adopted to outline its function, which is to help the current police force by writing reports, street patrol and other basic activities. They do not have the same authority as an official police department and are not compensated.

The ordinance was passed unanimously.

Among the last actions the council took was to approve a new member to the Moody Commercial Development Authority Board, which is currently involved in the ongoing Kelly Creek Road project.

Beverly Bullock was the candidate for the position. She said that she has been in Moody for three years and is involved in various community activities. The council approved her unanimously.