TRUSSVILLE — The Cahaba Homestead Heritage Foundation (CHHF) made a presentation to city leaders on Thursday, Aug. 19, 2021, at a Trussville City Council workshop session. Because so many people were expected to attend the meeting, the workshop was held at the Trussville Civic Center. 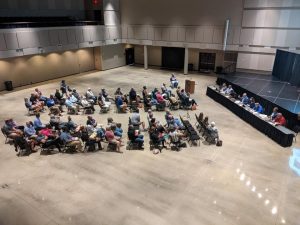 More than 50 people showed up for the workshop and many residents took to the microphone after the 20-minute presentation to voice their opinion on the future of the Cahaba Project.

The Cahaba Project is well known to Trussville citizens, and surrounding areas, for being the historic district of Trussville, appearing as if right out of a movie set. Still, it is accredited for uprising oppositional viewpoints for the past 25 years.

Trussville ranks in the top 25 best places to live in Alabama, and between 2010 and 2020, it ranked in the top 10 as one of the fastest-growing cities in Alabama.

Mayor Buddy Choat discussed the importance of the Thursday meeting because it spread the word to all the neighborhoods that a meeting was held to hear all perspectives to inspire a plan.

“The purpose of tonight was to let the [Cahaba Foundation] come in and review what their intentions really were,” Choat said. “So, the meeting was strictly designed to let more people know that there was going to be a discussion about the project.”

Ahead of the presentation by Amy Peterson O’Brien, the President of the CHHF, Council President Alan Taylor explained that everyone speaking after the presentation would have three minutes. He asked anyone in opposition to others to be respectful.

“This is Trussville,” Taylor said. “We are neighbors, we are family, and we care about each other. And we are going to do that in here tonight.”

O’Brien started the presentation by thanking the council for allowing her to speak to clear up any misconceptions about what the CHHF is trying to do.

“First and foremost, we’re educational,” said O’Brien. “And we have plans for a house museum and we’re discussing the possibility of a public garden. You know something that both type of entities that a future visitors’ center of Trussville would be proud to direct people to.”

She outlined the history and importance of the Cahaba Project, also known as “Slagheap Village”.

“Protecting the Cahaba Project is nothing new,” said O’Brien. “This is a conversation that has been going on for 25 years.”

O’Brien said the reason why it matters now is because of the city’s 20/40 plan, which she said doesn’t fit.

“Trussville’s 20/40 plan is part of the answer of why this matters now,” O’Brien explained. “The city taking initiative to plan ahead as they anticipate growth, as they want to attract the quality workforce and residents and appeal to young families. That’s all part of smart planning and right now, the Cahaba Project does not fit into that plan. There is not a plan for it. There is a process. There is a process called Design Review.”

O’Brien said Design Review Board is only able to make recommendations but does not safeguard the qualities that are valued in the neighborhood. The CHHF wants to see a plan that can do that and that can preserve the beauty in the area.

“We have a national treasure here, something really unique,” O’Brien continued. “Yes, there’s a good school system but it’s a lot more than that. There are a lot of beautiful towns with good school systems but this is unique and is an asset to the city of Trussville.”

O’Brien also said she hopes the project area’s centennial anniversary can be celebrated. She believes planning and promoting that celebration would be in the city’s best interest.

“Now is the time if we are going to shape the future of the Cahaba Project,” she said, in closing.

Not everyone agrees with O’Brien. Some at the meeting took the mic to voice concerns about local government overreach.

Leo Russo, the owner of Leo Russo Building Co Inc., recently demolished a Cahaba Project home for his brother. Russo said people want and need bigger and more practical homes, and some of the homes in the Cahaba Project are not meeting those needs. Russo added that he would and has listened to a board’s suggestions, such as Design Review, if it means that the value of the property would rise, but an understanding or plan won’t be made unless both sides are heard.

“We’ll be glad, and we were glad to listen to a board and their suggestions, and we tweaked the house to make some of those suggestions,” Russo said.

As a professional, Russo said there are multiple reasons someone may need to bulldoze an older home, including water problems, crawl space issues, supports and ceiling height.

Russo said history is repeating itself by “outcasting” those who purchase property in the projects and want to make improvements.

Russo said He said there is no need for a change because the plan that CHHF is looking for is already in place.

“The process is there,” Russo continued. “The plan is there and if you own a piece of property, a man talked about buying a house here years ago, and his goal was to tear it down one day and build a nice, modern house. That’s a plan. It might not be your plan, but it’s a plan.”

Property where home was demolished in the Cahaba Project. Photo: Erica Thomas.

Russo, who has been building houses since 1983, said he has never experienced challenges anywhere at any time as he has in the Cahaba Project.

“You know, it’s amazing,” said Russo. “They would be complaining if you were building small houses. They’d be complaining if you build houses that looked awful. But people are paying three, four-hundred thousand and tearing the house down and building a nice house. You should be proud of that instead of making someone feel like they’re trash for doing it. And I don’t appreciate that.”

After the meeting, Russo said for a builder, changes that are made are all about what people will buy.

“It’s market-driven,” Russo told The Tribune. “Unless you’re socialist and you want to tell everybody what they need to do.”

Russo said he doesn’t see a real solution that everyone can agree on becoming a reality because he doesn’t feel that those who are trying to come up with a so-called plan are one-sided.

There were also people who stood in support of what the CHHF wants to do.

James Patterson, who lives on Parkway Drive, said he doesn’t see two different sides to the issue, but rather sees people wanting the best quality of life and value of property possible. He believes there is an answer that everyone can agree on.

“The architecture, the beauty of the Cahaba Project matters to me,” said Patterson.

Patterson said his home in the project area has been renovated and the process was done carefully to preserve the overall look of the home.

Former City Councilor Zack Steele also spoke about an unpopular historic preservation ordinance he proposed in 2018, when he was on the council, that he said would’ve protected “a local historic landmark.” He said it was not his intention for the issue to become divisive, but rather something that could protect the value of the area while not infringing on the rights of property owners.

“We’re neighbors, we’re friends, and we all love this neighborhood,” Steele said.

Steele said he supports the intentions of the CHHF and doesn’t think the purpose is to support an ordinance like the one proposed in 2018.

Council members believe that with the input from everyone that the city as a whole should be able to find a solution and make a plan for the future of the Cahaba Projects.

Cahaba Homestead Heritage Foundation said that the community can reach out to them with ideas or thoughts on the Cahaba Project through cahabaheritage.org.