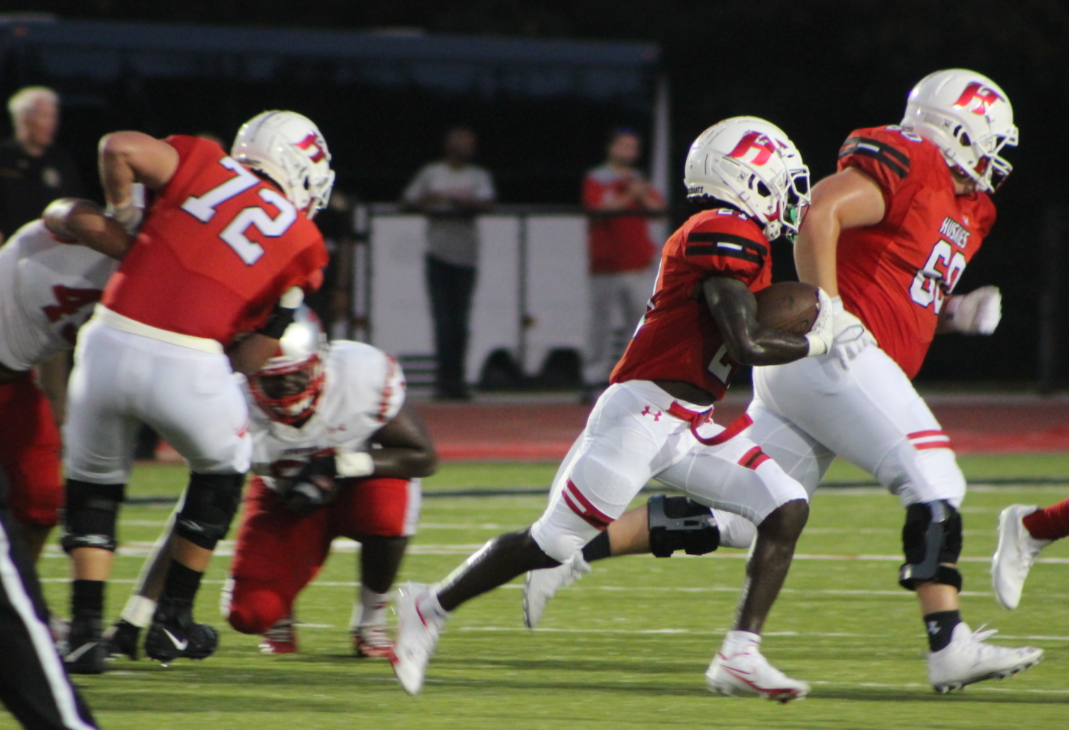 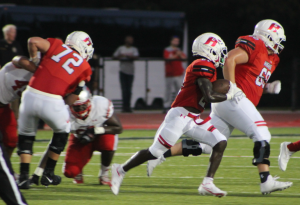 After hitting Ryan Shoop for a 10-yard gain and a first down to keep the Huskies’ first drive alive, senior quarterback Cade Carruth hit Kelly for a 38-yard touchdown. The kick was good, and Hewitt-Trussville led 7-0 with 10 minutes remaining in the first quarter.

Saraland moved the ball quickly on their ensuing possession, with Gabe Reynolds hitting a 27-yard slant to carve up the second level of the Huskies’ defense, using Matthew Milner as reliable target. But a big hit by the stop unit popped the ball loose and Hunter Jones recovered the fumble for Hewitt-Trussville on their own 20. The possession would go nowhere, however, and Saraland forced the Huskies to punt.

“You know, I definitely feel like we weren’t as crisp on offense as I would have liked for whatever reason,” Floyd said. “We kept shooting ourselves in the foot … our third-down conversions weren’t very good. But one thing is that we came back and responded better in the second half.”

By that time, the Hewitt-Trussville defense was getting its bearings. Hunter Osborne knocked down a Saraland pass on fourth down to stop a Spartan drive, and that led to an 11-play touchdown drive powered by Connor Thomas on an 11-yard reception and then a quick burst straight up the guts of the Spartan defense to hit paydirt. With the successful point after, the Huskies were up 14-0 by the end of the quarter.

While Saraland tried to make a meal off of the read-pass option and use quick slants to frustrate the Huskies, Justice Finkley would have none of it in the second quarter, sacking the Spartans quarterback for a 13-yard loss. The very next play, Hunter Osborne followed the quarterback as he rolled toward the Hewitt-Trussville sideline and planted him for another 10-yard loss.

“I think (getting the shutout) is really good,” Finkley said. “We prepared for them all week, we were really mentally dedicated to this game. I just see us putting this effort forward to the next couple of games in the season.”

The Huskies looked like they had momentum, setting up for a punt return by McCants. Instead, the return went off of his fingertips, and Saraland recovered with a little more than 5 minutes to go. But KJ Jackson stepped up, forcing a fumble and the Huskies recovered to take possession late going into the half.

That possession wouldn’t net any points, and Hewitt-Trussville was forced to punt. But on Saraland’s next possession, Rickey Gibson stepped in front of one of those pesky slants and intercepted the ball for the Huskies. Carruth led the offense down the field on a seven-play drive that stalled after a pair of incompletions for a turnover on downs. With nine seconds left in the half, Saraland didn’t make an issue of things, instead kneeling down to run out the clock.

Carruth didn’t waste time in the second half after the Huskies stopped Saraland and forced the visitors to punt. After an illegal formation penalty put the Huskies behind the sticks, the senior quarterback found Kelly for a 64-yard touchdown pass when the Auburn recruit blew past everyone on the Spartans defense. With less than two minutes gone in the third quarter, Hewitt-Trussville led 21-0 after the PAT.

Defensively, the squad turned on the jets, forcing a three-and-out from Saraland. After a short punt, the Huskies took over at their own 46, and it didn’t take long for Thomas to gut the Saraland defense again, this time gashing the Spartans for an 18-yard touchdown on the fourth play of the drive. The PAT made it 28-0.

But Thomas wasn’t done. With 5:59 to go in the third,  he stepped in front of a Saraland pass to nab an interception. Carruth led the Huskies down the field on a six-play drive that ended when James Hammonds scored from the 4-yard line. The PAT made it 35-0 with 2:35 left in the third quarter.

“It was really up to my O-line,” Thomas said after the victory. “They made a big hole, and I just had to run behind them. Just big props to them tonight.”

Jamarion White stepped in front of a Saraland pass to claim the next interception, and although Hewitt-Trussville went three-and-out, the Huskies squeezed more of the clock. With time running down in the fourth quarter, sophomore Peyton Floyd took over under center. Floyd earned a first down with a 16-yard run and leading the Huskies second-stringers on a 12-play scoring drive capped by Kennedy Mitchell scoring from eight yards out to make the final score 41-0 after the PAT.