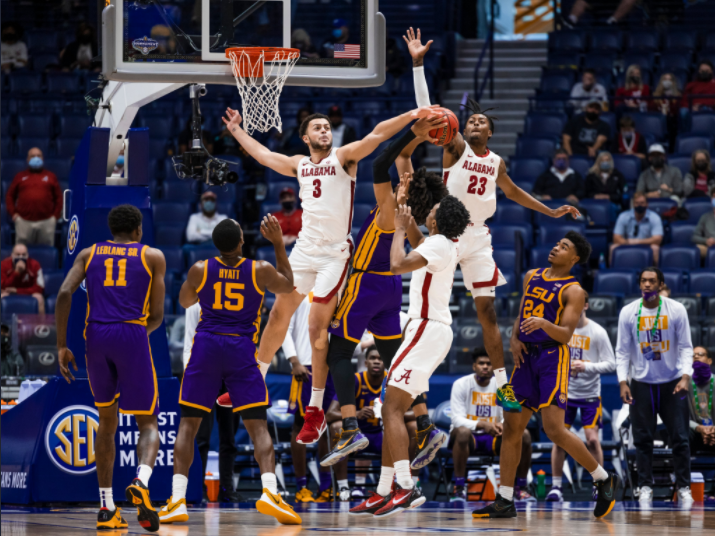 Action from the 2021 SEC Tournament championship game in Nashville, Tenn. Photo from Alabama Men's Basketball Twitter account. Alabama will play Colorado State on December 21, 2021 at the Legacy Arena in Birmingham.

Alabama basketball to play in Birmingham’s Legacy Arena on December 21 vs. Colorado State

BIRMINGHAM — The University of Alabama men’s basketball team will play in the inaugural C.M. Newton Classic on Tuesday, December 21, against Colorado State University. The game will take place in the new Legacy Arena at the BJCC and will be the first college basketball game played in the new venue since its remodel began in spring 2020. 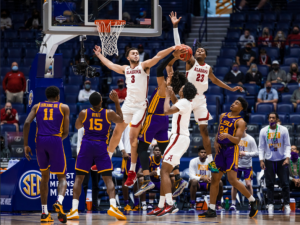 Action from the 2021 SEC Tournament championship game in Nashville, Tenn.
Photo from Alabama Men’s Basketball Twitter account. Alabama will play Colorado State on December 21, 2021 at the Legacy Arena in Birmingham.

“We are excited the Knight Eady group approached us about returning to play in Birmingham this year for the C.M. Newton Classic,” said Alabama head coach Nate Oats. “It should be an exciting game for the fans and a great way to honor a legendary figure in college basketball. We have a lot of fans and supporters in Birmingham and playing there is something we are open to doing each and every year. It’s also exciting because it will be our first opportunity to play in the newly-reconstructed Legacy Arena in front of what we believe will be an electric atmosphere.”

The neutral-site game is named after former Alabama basketball head coach, C.M. Newton. Newton was a member of the University of Kentucky national championship team in 1951. After college, Newton began his coaching career at Transylvania in 1956 and became head coach at the University of Alabama in 1968. During his 12 seasons at Alabama, Newton led the Tide to a 221-123 record, won three straight SEC Conference titles (1974-1976) and made two NCAA tournament appearances. The game is owned and operated by Knight Eady, a Birmingham-based company.

“We are excited to have the opportunity to compete against a great program like Alabama,” said Colorado State University head coach Niko Medved. “This is a game that will really challenge us as we get ready for our conference season.”

In addition to his coaching accolades, Newton was the first coach to integrate the men’s basketball team at the University of Alabama with Black student-athletes. When Newton started at Alabama, Vanderbilt was the only team in the SEC with one black player. Wendell Hudson of Birmingham’s Parker High became the first black athlete Newton recruited to play at the University of Alabama. In 1973, Newton put forth the first all-black starting lineup in SEC history at a holiday tournament in Louisville.

“I am thrilled to have two great teams playing in the inaugural C.M. Newton Classic,” said Martin Newton, C.M. Newton’s son and Samford’s athletic director. “My father didn’t care as much about wins and losses but more about creating equal opportunity for everyone to play, regardless of race. I hope this game will honor his legacy and shed light on the importance of diversity, equality and inclusion,” said Newton.

The game time will be announced later, and tickets to the game will go on sale later this fall. The University of Alabama is coming off an Elite Eight run in last year’s NCAA Tournament.

For more information about the C.M. Newton Classic, please email stotts@knighteady.com. To join the email list to know game time and when tickets go on sale, click here.