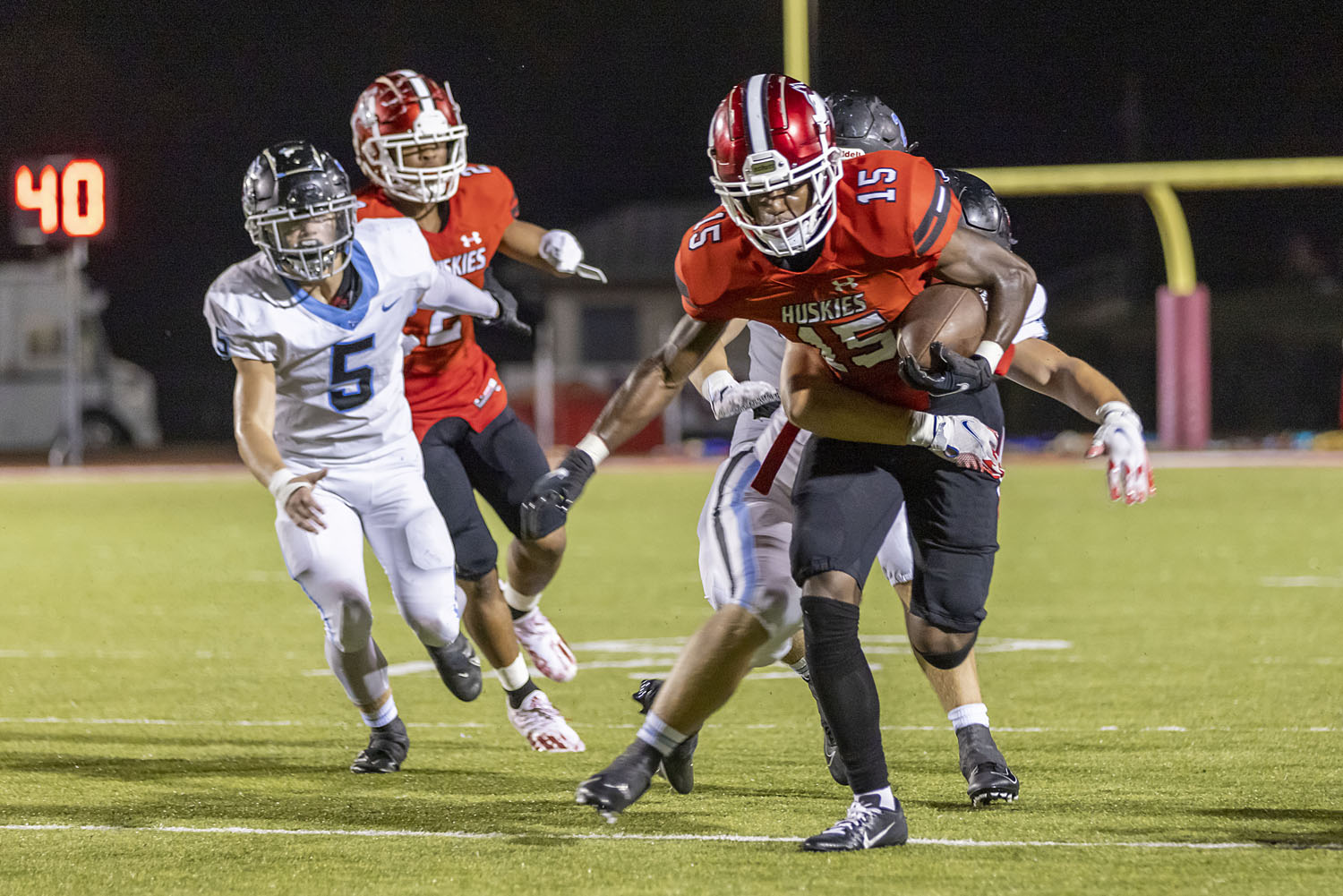 TRUSSVILLE — It looked like a blowout early, but turned into a long struggle as Hewitt-Trussville survived a game Spain Park team to open region play with a victory, 38-17. 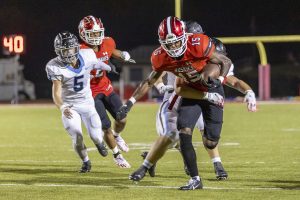 After holding the Jaguars to a three-and-out on their first possession, Hewitt-Trussville relied Omari Kelly, who took a Carruth pass 49 yards to get in the red zone. With first-and-goal, Kelly went off the right side as the offensive line opened up a huge hole. Kelly waltzed into the end zone, and with the PAT, Hewitt-Trussville was up 14-0 with 8:13 left in the first.

Spain Park (0-3, 0-1) responded with an 8-play drive. Using a quarterback sweep and option tosses, the Jaguars kept the Huskies on the field and put together an 8-play drive capped by a 19-yard touchdown dash by junior running back Zamir Farris. The extra point made it 14-7 with 3:34 left in the first.

By slowing down the game and maintaining possession of the ball, Spain Park was able to claw its way back into the game, and their defense confused the Hewitt-Trussville offense for much of the game, forcing the Huskies into a fourth-down-and-nine situation. Carruth dropped back to pass, but couldn’t find the open receiver. He tucked the ball and tried to run, but only made three yards.

The Jaguars began marching down the field until the Huskies finally held them to fourth-and-six at the Hewitt-Trussville 30. Electing to go for it on fourth down, Spain Park quarterback Evan Smallwood connected with senior wideout Pierson Cole for a 14-yard first down as the Jags continued to control the clock. Braxton Sumpter kicked a short field goal to bring Spain Park within four, 14-10, with 6:17 left in the half.

Connor Thomas set up Hewitt-Trussville in good field possession on the next kickoff return. The senior defensive back took the ball inside the five yard line and took it to the 41, cutting up the left side of the Spain Park coverage unit. But Spain Park held the potent Husky offense to three-and-out and began to try to grind the clock down again.

Hewitt-Trussville’s defense held, and on the next possession, Carruth hit Kelly for a pair of short passes for a first down. Then the Huskies reeled off four more first downs to set up first-and-goal from the 9-yard line. Three plays later, Hewitt-Trussville had to settle for a Riley Rigg field goal from the three-yard line to make it 17-10 at the half.

In the second half, the teams traded punts. Starting on their own 14-yard line, the Jags began to march down the field.

Farris went 24 yards on the first carry, and from there it felt like Spain Park was gouging the Huskies on the ground as Farris went 16 yards to finish the drive with a touchdown for the Jags. With 3:13 left in the third, it was knotted, 17-17.

Hewitt-Trussville answered with a seven-play drive — aided by a costly personal foul penalty against Spain Park — that resulted in an emphatic five-yard touchdown run by Carruth. After the extra point, it was 24-17 and the Huskies never relinquished that lead.

On the Huskies’ very next possession, sophomore Peyton Floyd came in as the quarterback. He rolled to his right and found Omari Kelly in stride for a 67-yard touchdown pass to put Hewitt-Trussville up 31-17 with 11:38 left in the fourth quarter.

With the Huskies’ offense finally rolling, it was the defense’s turn to clamp down on the visitors. In the first half, senior linebacker Bam White went down with a leg injury. Fellow senior Dawson Blount got the call to start the second half, and he balled out. Blount sacked Smallwood twice and recovered a fumble to give the ball back to the Huskies after they were forced to punt again.

With the lead and a tiring Spain Park defense on the field, the Huskies went to senior running back Hammonds again. He’d gotten the scoring started with a 45-yard TD, and then with 3:46 left in the fourth quarter, he went to the left side of the field and scored on a 46-yard run. The PAT made it 38-17, and the Huskies could breathe a little easier.

The Huskies play host to Tuscaloosa County next Friday, September 10.