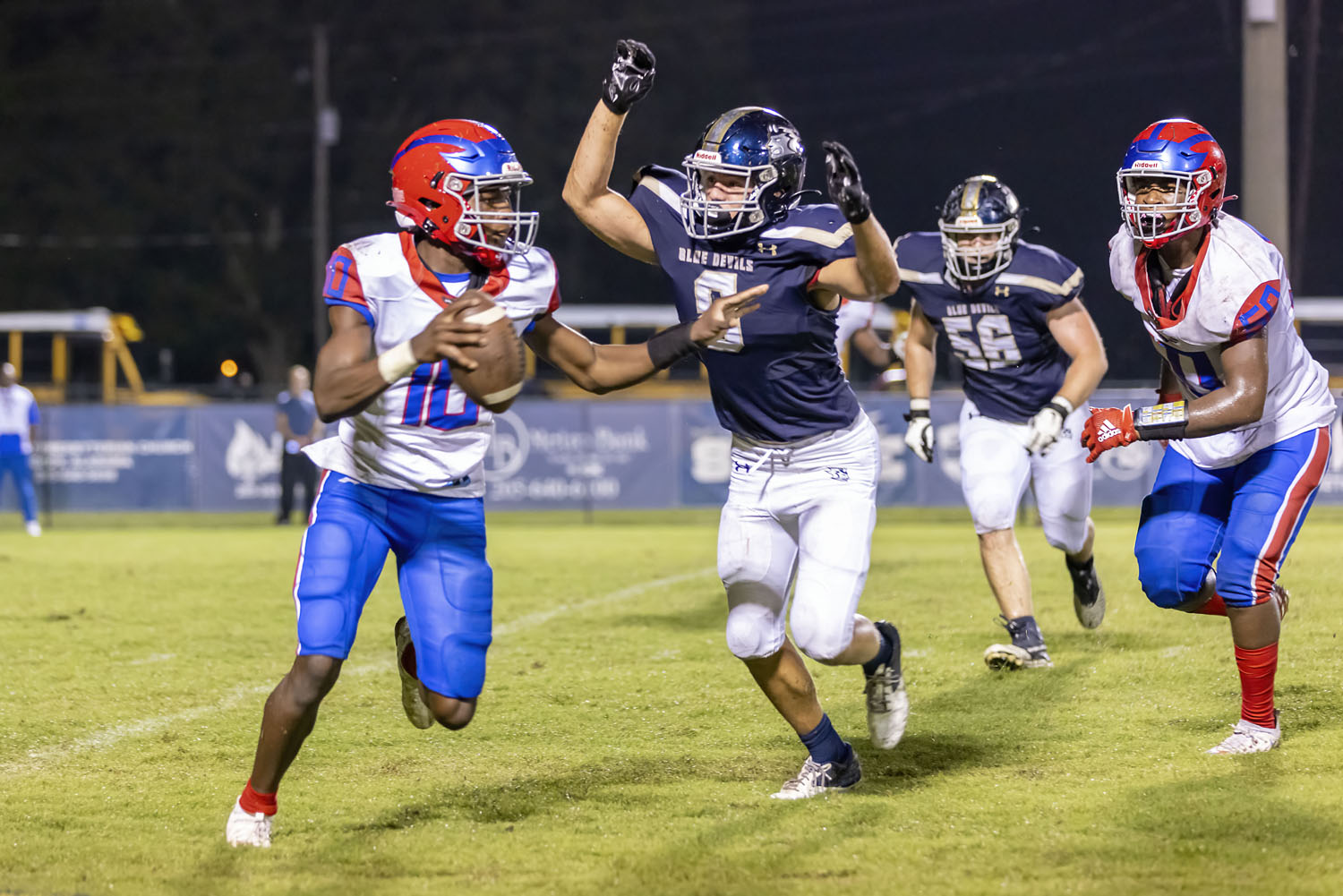 Jabari Collier (10) and Troy Bruce Jr. were the difference in Center Point's destruction of Moody on Friday, September 17, 2021. (Photo by Ron Burkett)

By Johnny Sanders, for the Tribune

MOODY — The Center Point Eagles marched into Moody on Friday night and walked out with a huge 40-11 win over the Blue Devils in an important 5A Region 6 matchup that could determine who makes the playoffs at the end of the season.

Jabari Collier (10) and Troy Bruce Jr. were the difference in Center Point’s destruction of Moody on Friday, September 17, 2021. (Photo by Ron Burkett)

“We are just getting better,” said Eagles’ coach George Bates. “That’s our big deal right now.  We want to get Center Point better each week.  We’ve done that the previous 2 weeks.”

After trading punts in each team’s first drive, Center Point opened up the scoring with a 32-yard pass from Jabari Collier to Harold Holloman to put them up 6-0 with 5:40 to go in the opening frame.  Moody would then drive the ball down to the 14-yard line; however, a 4th and 3 attempt failed and gave the Eagles the ball at their own 20 and the quarter would end with Center Point leading Moody 6-0.

In the second quarter, the duo of Collier and running back Troy Bruce Jr would begin to take over.  They were the only two to touch the ball on an 8-play 80-yard drive that saw Bruce score from 10 yards out with 9:12 left in the second quarter, putting the Eagles up 13-0.  Moody put together another decent drive that led to a 32-yard field goal by Christian Sierra to get the Blue Devils on the board.  Center Point would strike once again with just under a minute to go in the half, with Bruce once again running it in, this time from 6 yards out.  The half would end with Center Point all over Moody, 20-3.

Moody would go 3-and-out on the first drive of the second half, giving the Eagles the ball once again.  And once again, Bruce found pay dirt, putting Center Point up 27-3 over the home team.  On the next drive, AJ Wallace and company would drive the ball 47 yards, capping it off with an 18-yard strike from Wallace to Davion Dozier to get the first touchdown of the night for Moody at the 4:29 mark of the third quarter and that would be the score going into the fourth.

With momentum on their side the Moody defense would hold Center Point to 3-and-out and set up shop once again.  However, that momentum would be short-lived as another failed 4th down attempt inside the Eagles’ 20 would give the visitors the ball back.  2 plays later, Collier would call his own number and take the ball 73 yards for the score and now Center Point was up 34-11 with 10:54 to play.  On the next drive, Moody would find little success, attempting a fake punt on 4th down but coming up short.  Center Point would take the following drive 62 yards down the field, capped off by another touchdown from Collier, giving Center Point the 40-11 win.

Asked about the stellar performance from Collier and Bruce Jr, Bates said, “They are two of our Juniors.  They are coming into their own.  I’m proud of them.”  The duo combined for 343 yards and all 6 touchdowns in the game.

“A lot went wrong.  We just didn’t play very good football and that falls on me as the head coach,” said Moody’s Adam Wallace, “We’re going to put this one on the head coach.  The bye week is coming at a good time for us to heal and get re-focused.”  Moody has a bye week next week while Center Point hosts Anniston.