TRUSSVILLE — The Swingin’ Medallions formed their band in 1962 in Greenwood, South Carolina. By 1966, they had sold a million and a half copies of their biggest single and were a hit on college campuses and venues across the south. On Friday, Sept. 24, from 7 p.m. until 9:30 p.m., boomers of all ages will get to experience the “Party Band of the South” at Ferus Artisan Ales in the Trussville Entertainment District. 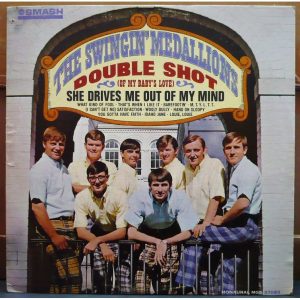 According to their website, their musical roots came from listening to the early rhythm and blues acts. The music most often associated with the band is beach music, frat rock, R&B, or shaggin’ music. After a few years of touring colleges from the Carolinas to the Louisiana Bayou, John McElrath took the group to Arthur Smith’s Studio in Charlotte North Carolina, to record Double Shot (of My Baby’s Love).

The song became a million seller in 1966, and has been a party classic for college students for decades. She Drives Me Out Of My Mind and Hey, Hey, Baby were top 40 hits in 1966 and 1967, but “Double Shot” remains the signature song of the Swingin’ Medallions.

The members of the Swingin’ Medallions have changed over the past thirty years. The personnel of the band has always included around eight members with at least a four piece horn section. The high energy party style stage performance of the first Medallions has been passed down to the band that performs today.The present Medallions stage show has coined them the name “The Party Band of the South.”

Many of the Medallions attended and graduated from Lander University in Greenwood, SC while performing in the south east. The University of Georgia was also the home of some of the band members.

The Swingin’ Medallions’ music has been featured in countless movies and television shows.

Lewis Grizzard (Southern humorist and writer) labeled the Medallions as “The Party Band of the South”, a moniker that has become forever synonymous with the Medallion name. Grizzard wrote in a nationally syndicated column, “Even today, when I hear Double Shot of My Baby’s Love, it makes me want to stand outside in the hot sun with a milkshake cup full of beer in one hand and a slightly drenched coed in the other.”

Chicago Tribune nationally syndicated columnist Bob Greene wrote an article entitled The Swingin’ Medallion View of U.S. History. He summed up America’s love affair with “Double Shot” with his discovery of the song being played and sold in the gift shop of the Smithsonian Institute. When inquiring as to why it was available in the nation’s foremost repository of history, the clerk replied, “Because it’s as much a part of our history as anything else we sell”.

You can check out the videos below as the band performs It’s Alright in the first video and join Bruce Sprinsteen in stage for Double Shot.