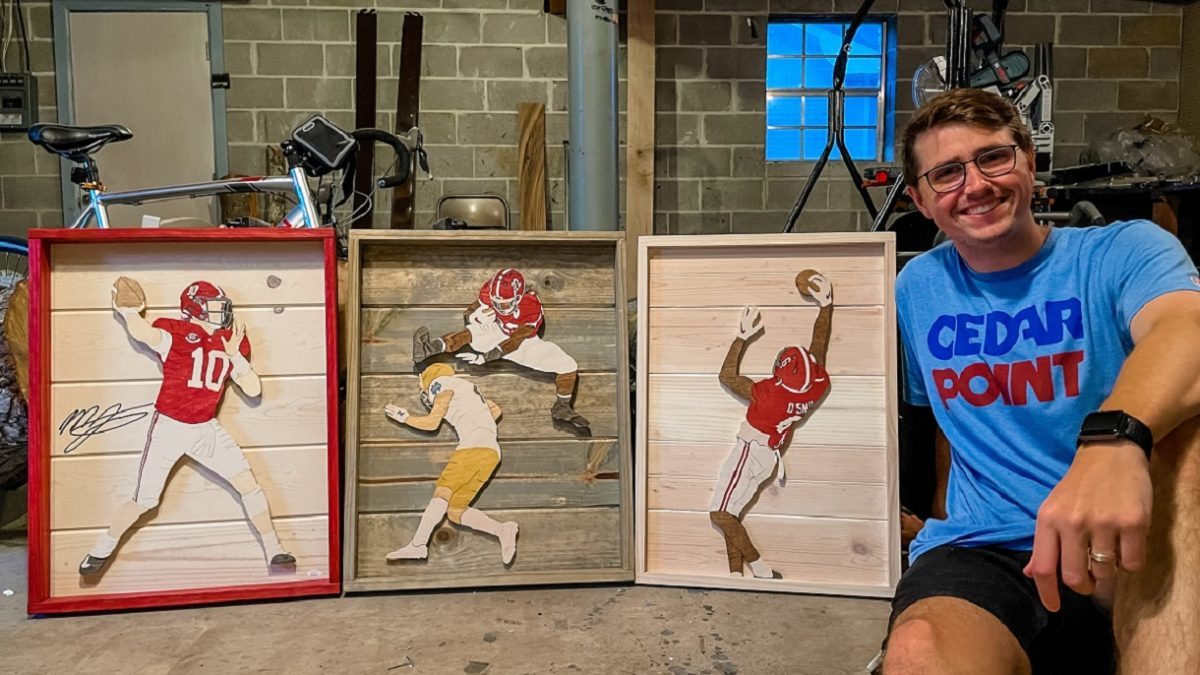 TRUSSVILLE — Nick Garrett spent a recent weekend using his scroll saw to craft a wood 3D jersey of All-Pro NFL running back Derrick Henry, one of his favorite football players while Garrett attended the University of Alabama, and his favorite NFL player. Garrett, a distribution engineer at Alabama Power, planned to hang the jersey in his man cave. 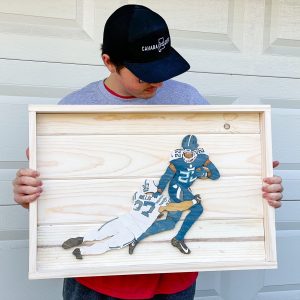 Nick Garrett shows off one of his woodcuts of Derrick Henry stiff-arming an opposing player. (Contributed photo)

Garrett’s plans changed minutes after he posted a picture of the finished product on Twitter and Instagram.

“As soon as I did that, no lie, about 30 minutes later, one of my followers messaged me on Twitter with a link to a tweet from Derrick Henry that said, anybody who makes any art or cool stuff related to me, let me know. I’d love to purchase some of it and help support,” Garrett said.

If anybody makes cool paintings or items of me, I would like to support & purchase some .

What he didn’t expect was Henry’s two-word reply: “How much!?”

“That was a very shocking thing to see. … I really did kind of flip out. That’s every artist’s and sports fan’s dream is to have your work noticed by someone like Derrick Henry and also he wants to buy it,” Garrett said.

Garrett realized he had created a dilemma: He had no idea how much to charge the reigning NFL Offensive Player of the Year.

“Because who am I to charge Derrick Henry for anything, you know? Once I figured out a price to tell him, I sent it to him and he sent me some money. It was a very cool and unexpected circumstance,” Garrett said.

Selling his art to Henry is “just humbling. … To have someone of that notoriety to see it and then also think enough of it to buy it really just blew me away.

“It made me appreciate Derrick Henry even more. Him supporting the community, it really shows how important the fans are to him,” Garrett said.

That wasn’t the end of the story. A reporter at a Titans news conference asked Henry about his tweet seeking art from his followers.

”People just had paintings, all types of creations,” Henry responded. “I was able to purchase a board from this guy that he made it look like our jerseys, which I thought was pretty cool. … I just appreciate the responses I got from all the people. People are very creative and they put a lot of work into their art. I just appreciate all the responses and all the cool things.”

While Henry didn’t mention him by name, Garrett said just hearing the All-Pro player mention his art made his jaw drop. “Man, this is unbelievable.”

It’s especially unbelievable for someone who, growing up in Trussville, had no idea he was at all artistic.

“I would have never assumed that I would end up doing anything artistic. I was always very studious, and focused on math and science.” He was shocked when his eighth grade art teacher gave him an art award “saying I was the most artistic of the eighth graders.”

Looking back, the Hewitt-Trussville High graduate said that helped him understand that he was more creative than he’d realized and he needed an outlet for it.

Garrett found that outlet in his grandfather Rogers Sisson’s shop. Sisson, a carpenter, often puttered in his shop, making furniture as well as toys for his grandchildren.

“Really, most of how I got into woodworking in general came from wanting to spend time with him there and, out of necessity, to build some furniture for my houses that I lived at in college,” Garrett said. “We spent a lot of time working together doing stuff like that.”

One day Sisson came home with a scroll saw that he had bought. He used it a few times and then told Garrett he should try it out.

Garrett’s first real scroll saw project came three years ago. He had spent a lot of time during the summer watching his favorite baseball team, the Cleveland Indians, on television. He decided to use the scroll saw to make an Indians sign to decorate his room.

“I found out that I really liked it,” he said. “It was just a really unexpected fun, creative outlet.”

Garrett got to express himself artistically and use his problem-solving engineer’s brain for the technical, intricate cutting maneuvers needed to create art on the scroll saw.

He made more pieces of art for himself, then for other people, crafting birdhouses, cutting boards, signs and logos and, of course, 3D athletes’ jerseys as well as action shots of them ­– think Daniel Moore of the scroll saw.

“I’ve had someone say that to me before,” he said of the well-known artist who paints iconic images from Alabama football games. “That’s a good nickname to have.”

Garrett has built a satisfying hobby that makes him some money, but he says it’s nothing that will replace his day job as an engineer in Alabama Power’s Pelham office.

“Alabama Power is a great place to work. I have no plans of leaving them for this,” he said. “If I can make a little cash on the side and fund my hobby just by the things I make and sell, that’s plenty for me.”

Having his favorite pro football player help fund that hobby is a bonus for Garrett that he hopes will bring more business.

“I never expected that when I started making a sign three years ago for my bedroom that Derrick Henry would be talking about my work in a press conference,” he said. “I don’t think I’ll get another review ever that will top that one.

“That will be on the Mount Rushmore of my projects for all time.”

This story originally appeared on the Alabama News Center, a website affiliated with Alabama Power. The story and photos are used with permission.