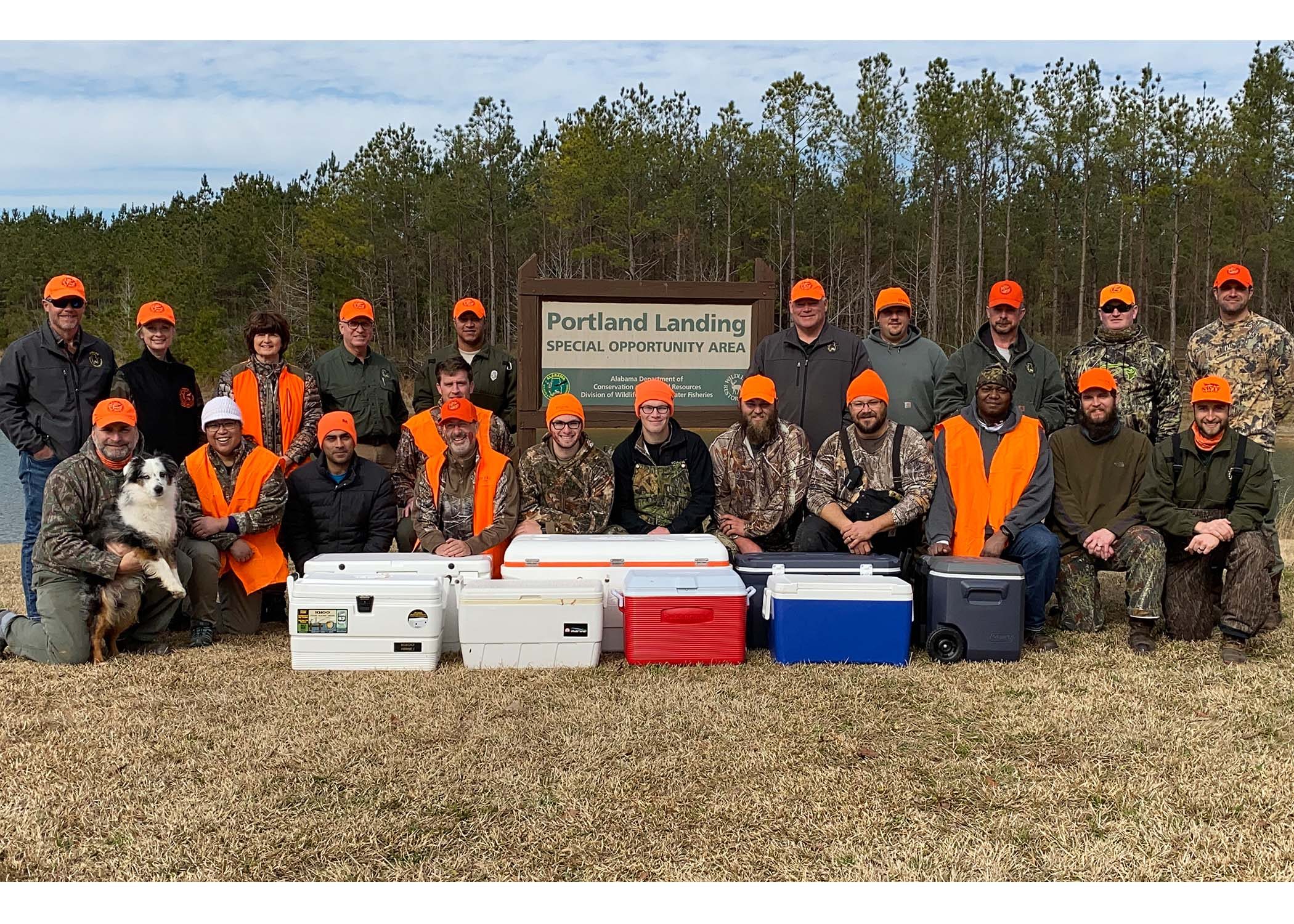 PHOTOS: (ADCNR) Participants in the AMH hunts enjoy the outdoors at one of the premier hunting areas in Alabama at Portland Landing SOA.

The Alabama Wildlife and Freshwater Fisheries (WFF) Division’s Adult Mentored Hunting (AMH) Program has two main goals – to provide those with little or no hunting experience with a safe, enjoyable weekend in the woods and to kindle an interest in hunting that will last a lifetime. 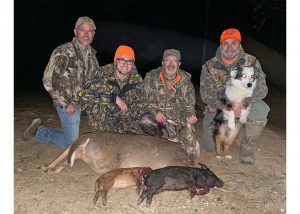 Judging from the feedback from the mentored hunts, the first goal has been a great success. For some of the newcomers – Terrance Marshall and Kevin Kurtz – those AMH outings have changed their lives.

Marshall of Clayton, Alabama, has been connected to the outdoors most of his life but never as a hunter.

“I was always big on fishing,” said Marshall, who has been an officer at the Ventress Correctional Facility for the past 20 years. “I love fishing.”

Marshall and WFF Conservation Enforcement Officer (CEO) Bill Freeman have been buddies for many years, a friendship that started with the Alabama Department of Corrections (DOC). Freeman moved to Conservation and Marshall stayed with the DOC.

“Bill got into all the (outreach) programs, and he found out that I was interested in going hunting,” Marshall said. “Bill called me, and I told him I’d never been hunting. I’ve got a passion for fishing. I told him if hunting was like fishing, I was going to love it.”

Marshall teamed up with Freeman and retired CEO Johnny Johnson, who sat in the stand with Marshall, for a late-season deer hunt.

“I enjoyed it,” Marshall said. “I didn’t get the opportunity to shoot anything, but it was relaxing. I loved it. The next day I bought a rifle. Johnny had a Remington .270. I fired it before our hunt when we went over firearms safety. I liked the way that rifle fired, so the next day I went and purchased one.”

A new rifle wasn’t the only purchase Marshall made to enjoy Alabama’s great outdoors.

“I just purchased a tract of land, 114 acres with two ponds and all kinds of wildlife,” he said. “In fact, I’ve been over there bushhogging and cleaning things up to get prepared for the season that’s coming in.

“I love the outdoors and I love the cold. I don’t regret a minute of it. I give credit to Bill for reaching out and telling me about the programs. Not only was I going, I brought my son along when they had something for the youth. I also took my daughters to the youth fishing events.”

Meanwhile, Kurtz, an Auburn graduate, is in the process of making a more dramatic commitment to his new hunting activity.

After traveling the world in the U.S. Navy for 20 years, much of that time as a Service Warfare Officer (what Kurtz calls a ship driver in simple terms), he went into the geographical information systems (GIS) business in Tampa, Florida.

“I hadn’t been back to Alabama in a long time because there aren’t too many Navy bases,” he said. “But when my son (Nathan) applied to and was accepted into Auburn, I got my interest back in Alabama.” 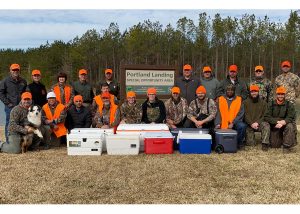 PHOTOS: (ADCNR)
Participants in the AMH hunts enjoy the outdoors at one of the premier hunting areas in Alabama at Portland Landing SOA.

Nathan entered the School of Forestry and Wildlife Sciences to study Geospatial and Environmental Informatics, which includes digital mapping.

“The School of Forestry was just getting ready to graduate their first class in that program, and Professor Scott Enebak found out what I was doing after my retirement from the Navy,” said the elder Kurtz, whose Navy career included guiding the aircraft carrier Harry S. Truman through the Suez Canal. “He asked me to be on an advisory board. Obviously, I said yes.”

Before the COVID-19 pandemic hit full-force, Kurtz heard a presentation from WFF Director Chuck Sykes about the AMH opportunities.

“My son’s birthday was that September, and I decided to take him to a weekend class on deer hunting,” Kurtz said. “I’ve always owned handguns and shotguns but had never been hunting. I put our names in for a mentored hunt, and we got to go in January.

“They taught us everything from soup to nuts – what to look for, how to dress, everything. It’s so professional and so well done. Every meal we had had some kind of venison in it. It was just awesome.”

“What a fantastic time,” Kevin said. “Chuck was my mentor. As we were walking up to the area we were going to hunt, Chuck stopped. He’s got the eye. I can see a ship on the horizon, but Chuck can see a deer in the woods on the horizon. I think it was a six-point. Chuck looked at him and said, ‘He’s a little too young. We’re going to pass on that one.’ I ended up shooting the doe at sunset.

“It was such a thrill. He told me that I would be nervous and excited and, after it was over, if I didn’t feel something for the animal there was something wrong. I get it. At that point, I realized this is serious business. We’re practicing wildlife management, and it’s not a bad thing.”

After attending a turkey hunting workshop, Kurtz had a serious conversation with his wife about relocating.

“We decided to buy some land in Alabama,” he said. “We looked and looked. An incredible opportunity came up near Ramer, Alabama. We bought 120 acres in southern Montgomery County. It’s gorgeous. Chuck came over and said we had a gem; it is turkey heaven. So, I guess we’re getting into turkey hunting.

“The land has a house and barn. My wife and I are planning to move there next summer. It’s not only the hunting culture, but just the culture in that area. It’s a unique bunch of people. They’re responsible. They love their Second Amendment rights and love America. We’re blessed. It was a domino effect that started with my son going back to my alma mater.”

Kurtz has obviously become a big supporter of the AMH outreach programs and the WFF personnel and volunteers who make it happen.

“What they do is phenomenal,” he said. “It was such a diverse group of people at the hunts – people from all walks of life. There were people there like my son and I who had never been hunting before. 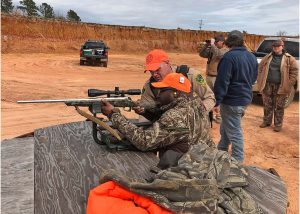 PHOTOS: (ADCNR) Terrance Marshall gets firearms safety instruction for a WFF officer before his AMH hunt.

“I told Chuck and everybody else, it was life changing. It really was. I have such an appreciation now for what responsible hunting is about.”

Consuming what you harvest is a steadfast mantra of the hunting community, and the Kurtz family is definitely on board.

“We’re still eating the deer we got in January,” he said. “If I don’t ever buy any more ground red meat, I’ll be fine. I’m making venison burgers, chili and stew.”

The Kurtz family has a big week planned around the opening of gun deer season in Alabama on November 20. They get to hunt deer the week of Thanksgiving before they head to Auburn the Saturday after the holiday for the Iron Bowl.

Kurtz said he has a lot of work to do before the season opener, but he admits the end result brings him great satisfaction.

“The best advice Chuck gave on my property is that you can easily get overwhelmed,” Kurtz said. “Just take it a day at a time. Every time I go up, I’ve got a list of 20 things. If I get five done, I’m happy. We’re fortunate the previous owners were hunters. We’ve got two nice deer plots. There’s a shooting house on the power line. I’ve got plots to plant in October, and I’ll be on the tractor bushhogging.

Visit www.outdooralabama.com/hunting/adult-mentored-hunting-program for information and how to register.