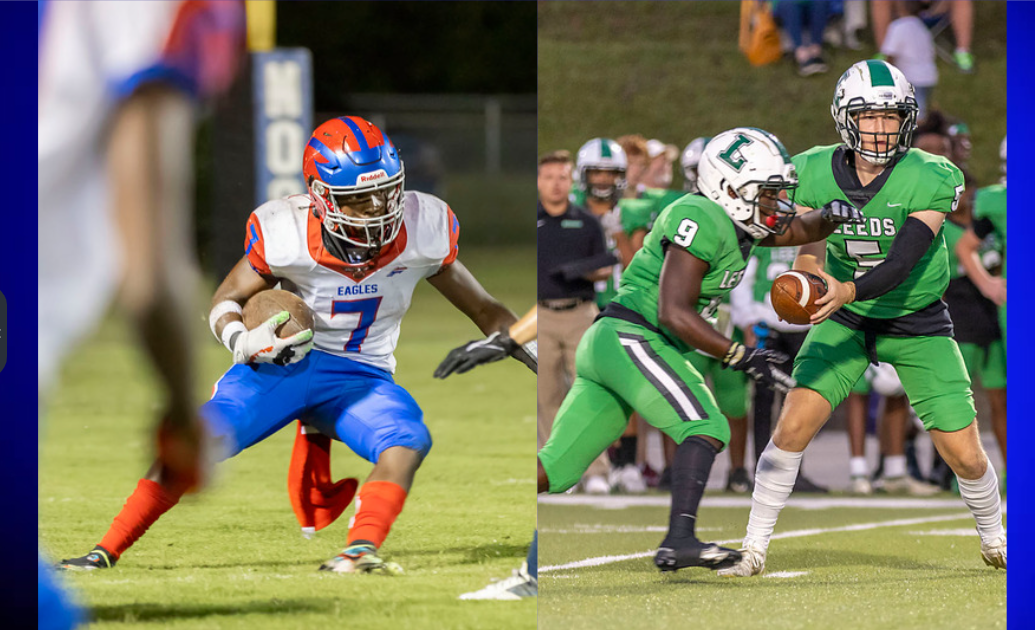 Troy Bruce (left) and the Center Point Eagles have a tough test when they host Rametrius Yelverton, Jarod Latta, and the rest of the Leeds Green Wave on Friday, October 1, 2021. (Photos by Ron Burkett)

Leeds vs. Center Point comes down to three factors

Leeds visits Center Point on Friday night, Oct. 1, and it’s a great way to kick off the spookiest month of the year. There are enough scary players on both squads to satisfy anyone, so let’s break the game down. 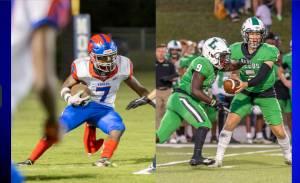 Troy Bruce (left) and the Center Point Eagles have a tough test when they host Rametrius Yelverton, Jarod Latta, and the rest of the Leeds Green Wave on Friday, October 1, 2021. (Photos by Ron Burkett)

Leeds: The Green Wave is 6-0 and the fourth-ranked team in 5A. They’ve won tough games (Lincoln and Moody), and they’ve won blowouts (Hayden and West Morgan). This is a battle-tested team that does what it has to do to win. Shut Rametrius Yelverton down in the running game? No problem: Jarod Latta can chuck that rock, and Josh Ruff and Mekhi Jones can catch it.

Defensively, the Green Wave has a stout front line, anchored by Kavion Henderson, Cody Saulisbury and Tucker Summers. CJ Douglas switches between safety and linebacker, and he hits like no one else on the Leeds squad. When the Leeds stop unit is on, they can roll over offenses and make them look bad.

Center Point: Opposing teams can’t concentrate too much on junior running back Troy Bruce. Even though he’s a great runner who can take advantage of even the narrowest openings, Bruce is only one part of the equation that makes Center Point’s offense work. Jabari Collier can be a headache for any defense. He passes just enough to keep the defense honest, and when he chooses to use his legs, the junior quarterback has elite speed. Harold Holloman is Collier’s chief target, and he’s got good hands and speed enough to be dangerous.

Players like Demario Hicks and Kaleb Parker-Holt will have to step up for the Eagles, and Deraiven Crawford will need to continue to shine on the defensive line. When he’s on, Malik Brown is as good a linebacker as you’ll want to see in 5A. The Eagles are now 4-2. They dropped two straight, but have now hit a three-game winning streak as the offense has finally gelled under a new offensive coordinator.

Who has the advantage?

Running the ball: Center Point head coach George Bates has called Bruce the best pound-for-pound tailback in the state, and it’s hard to argue with him. Bruce is fast, he’s shifty, and he’s going to get his yards. Add in Collier, and you have a truly dangerous running game, as everyone from Lincoln to Moody to Anniston has discovered. While Yelverton is also an excellent back, Center Point has the edge in the running game.

Passing: Jarod Latta is a quarterback. Often, Jabari Collier seems like a gifted athlete who happens to play quarterback. Latta is a better passer with more options at receiver. Advantage: Leeds.

Defense: Leeds has the names on defense. Kavion Henderson’s already received FBS scholarship offers as a sophomore. He can be a monster on the line, whether it’s getting pressure on the quarterback or absorbing a double-team so that Saulisbury or Summers can make a play. Center Point’s Brown will be the best linebacker on the field unless Leeds’ Douglas lines up there. Advantage: Leeds.

In 2020, this game came down to an intangible moment. After leading 14-0 into the third quarter, Center Point began to give ground. When it was 14-10, a Latta pass ricocheted off of another player’s helmet and into a Leeds receiver’s hands for the go-ahead touchdown. The Green Wave won, 17-14, and that loss has stuck in the heart of the Center Point players for a year.

Leeds will have to weather an early storm and hope that Center Point’s offensive line doesn’t set the edge for their speedsters. It’s very, very possible that Center Point will win this game. Ask Moody or Lincoln, two teams who stayed close with Leeds but were burned quickly by the Eagles. However, the Green Wave has advantages in passing and overall defense, as well as the intangibles of a team that’s ‘been there before.’

Bobby Mathews is sports editor of The Trussville Tribune. Reach him at bobby.mathews@gmail.com or @bobbymathews on Twitter.