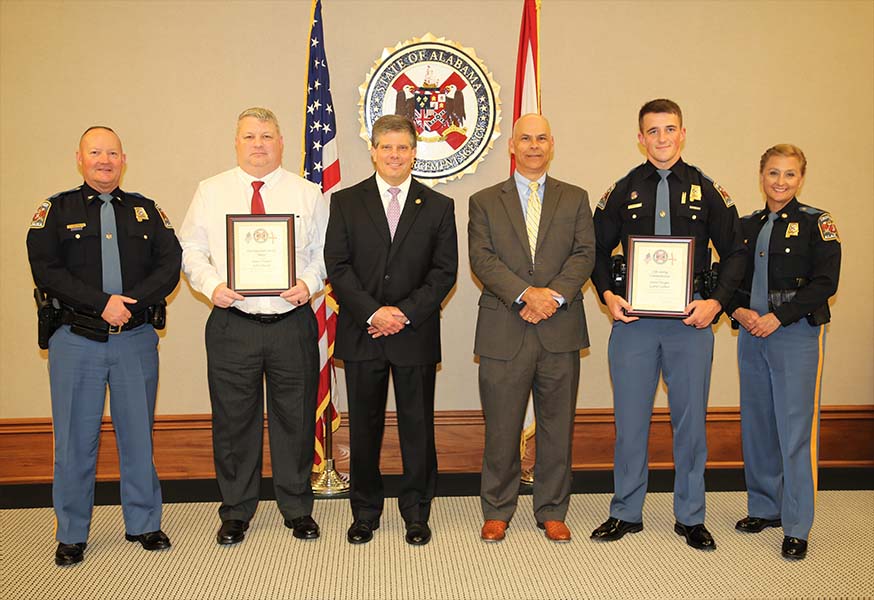 MONTGOMERY – The Alabama Law Enforcement Agency’s (ALEA) Secretary Hal Taylor is pleased to announce the recipients of the Agency’s Lifesaving and Distinguished Service Awards for outstanding professionalism and skills displayed through a heroic act that preserved the life of another.

“We are truly grateful to have such dedicated and courageous Troopers, as well as Special Agents, who exemplify the Agency’s mission while providing protection and applying the appropriate action and training to assist every individual in what may seem like their darkest hour,” Secretary Taylor said.

Due to the COVID-19 pandemic, Secretary Taylor presented the awards to eight individuals, two within ALEA’s Highway Patrol Division and six assigned to ALEA’s State Bureau of Investigation (SBI), during a closed ceremony held at ALEA Headquarters for the family and colleagues of the recipients. The event highlighted remarkable stories detailed by Department of Public Safety (DPS) Director Colonel Jimmy Helms and SBI Director Chris Inabinett.

Senior Trooper Gabriel Gilbert, assigned to ALEA’s Highway Patrol Division, received the Lifesaving Award for his quick thinking and decision-making, which resulted in preserving the life of a citizen.

On May 11, Sr. Trooper Gilbert was patrolling Interstate 459 in Jefferson County when he discovered an individual parked on the side of the road and was unresponsive inside their vehicle. After assessing the situation, Sr. Trooper Gilbert suspected a narcotics overdose and immediately administered Narcan, which is used to reverse the effects of an opioid overdose. He then called for additional medical services to further assist the individual.

Now retired, Senior Trooper John Vincent received the Distinguished Service Award for his extraordinary heroism and actions above the call of duty and at the risk of his own life. On May 18, Sr. Trooper Vincent responded to a high-speed pursuit involving officers from multiple local agencies, and a suspect wanted for murder. The suspect stole a vehicle and was using it to strike law enforcement vehicles while firing at officers. Ultimately, the suspect’s vehicle was disabled, which resulted in the individual exiting and holding an innocent citizen at gunpoint. Sr. Trooper Vincent gave the suspect several verbal commands, but the suspect refused to release his weapon and pointed the firearm at Sr. Trooper Vincent. With no other option, Sr. Trooper Vincent discharged his weapon to stop the suspect and then immediately requested medical services to provide assistance. 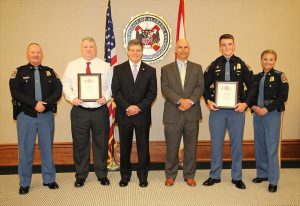 In addition to the awards received by Troopers, SBI Special Agents along with officers from local agencies, who are also assigned to ALEA’s SBI Task Force, were each presented with a Lifesaving Award for their ceaseless efforts and heroic actions in preserving the life of an individual who was arrested during a large-scale drug trafficking investigation in Jefferson County that occurred July 28. While being transported to the jail, the suspect collapsed and began to experience a medical emergency. Lieutenant Paul Hayes, Special Agent Senior Robert Bailey, and Task Force Officers Nick Burnett, Jon Gossett, Dustin Gray, and Marcel Walker immediately assessed the situation, provided medical aid, and requested paramedics. Officers quickly determined the suspect was suffering from a narcotics overdose and administered Narcan, saving the suspect’s life before medical assistance arrived.

“While we have all continued to face the challenges and adjust to the changes caused by the deadly pandemic and its variants in 2021, one element has remained constant in the era of the coronavirus: the dedication and commitment of our law enforcement officers. They have continued to answer the call, perform extraordinary tasks, and go above and beyond the call of duty,” Secretary Taylor said. “I am proud to recognize these individuals within our Agency who continuously display the level of courage and commitment that epitomizes American law enforcement.”