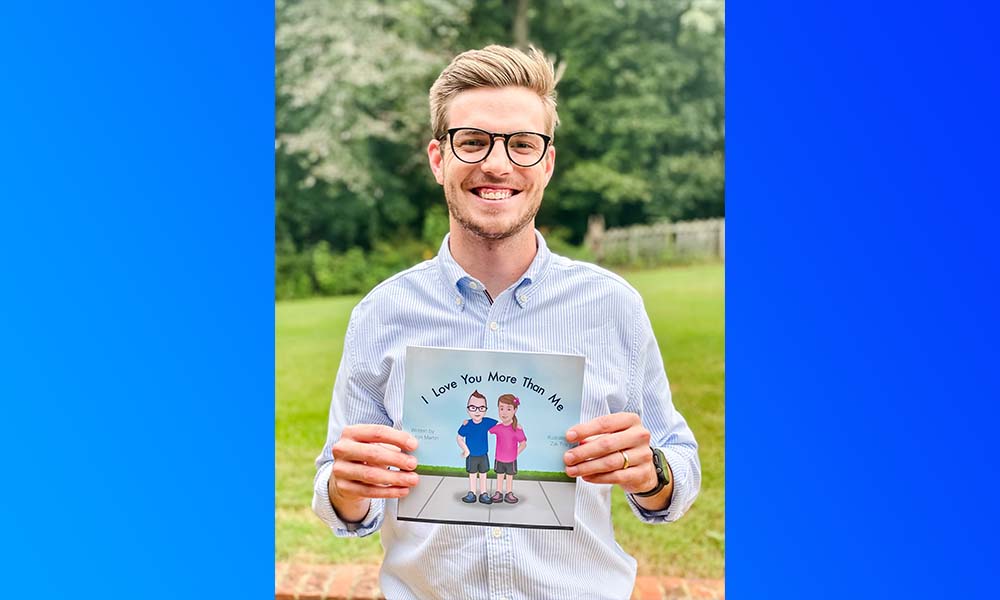 Clayton Martin received the first copy of his book and he is beyond excited to share it with everyone. (Photo courtesy of Clayton Martin)

SPRINGVILLE — Clayton Martin announced his book, “I Love You More Than Me,” releases on Wednesday, October 6. 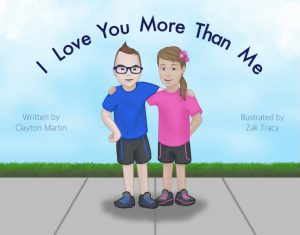 “I Love You More Than Me” Book Cover. (Photo courtesy of Clayton Martin)

The message of “I Love You More than Me” is deeper than it may appear at first glance. This story is about a friendship that emulates unconditional love, joy, and inclusion despite the differences. It’s a story about loving others more than ourselves.

Martin’s 3-year-old daughter, Norah, and her friend Levi, born with Down Syndrome, are the inspiration behind the book. As the book progresses, you follow Levi as he shows Norah just how much he loves her in many ways. For one, the story is written from Levi’s perspective, with typical thoughts, words, and emotions, much like our own. His actual physical limitations are not highlighted in the book because they don’t matter. Levi is not defined by what he can or cannot do. To Levi’s family and friends who know and love him, he is just Levi, a little boy who shows us how to be more concerned with others’ happiness rather than our own and who displays an amazing amount of empathy for others.

Martin and his family live in Springville. Martin’s book started from a dream he had a little over a year ago that he could not get out of his head. He explained that he usually doesn’t remember his dreams, but for some reason, this one stuck.

“It was kind of a crazy thing, and I sat on it for a couple of weeks; it was just one of those things where you just can’t forget about it,” Martin said. “So, I sat down one day and was just like, you know what, I’m just gonna write and see what happens.”

From there, the book took off; Martin had the title and the story idea in one sitting. He shared his story with some friends and received positive reviews.

(Left to Right) Levi Adams and Nora Martin have been friends almost their entire lives. (Photo courtesy of Clayton Martin)

To Martin, the only other opinion that matter was Levi’s parents, Eddie and Dedra Adams. So he reached out to Levi’s mom, and the response was overwhelming.

“The story itself is inspiring, but to see from their eyes and their perspective, and the impact that it’s made just in their family was just enough for me to keep it going,” Martin said.

As the book began to take shape, it started morphing into a rhyming book.

“It was a process to get it the way we like it, and it’s a rhyming back,” Martin said. “I didn’t initially plan for it to be a rhyming story, but as I was writing it and it just flowed that way.”

Before Martin could do anything, he needed something that no children’s book is complete without. He needed to find an illustrated. So he reached out to a former student of his when Martin was in student ministry, and with that, they created a partnership, Martin, the author and illustrated by Zak Tracy.

This was Martin’s first time publishing a book, and he decided to go the self-publishing route. He started working with a company in Tennessee called Ingram Spark, which distributes all over the world. Martin explains how Ingram Spark print-on-demand book copies are not printed until the company receives an order, allowing prints of single or small quantities.

When the Martins received their first copy of the book, Norah was so beyond to see herself and Levi on the front cover. Norah and Levi’s friendship and sprouted a friendship in their families to grow and learn together. 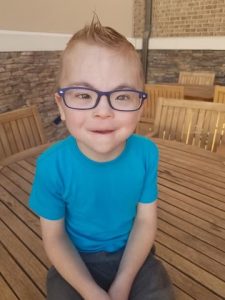 Levi Adams is a light to many. (Photo courtesy of Clayton Martin)

“We were able to get a copy before it officially publishes, and it was just a surreal moment,” Martin said. “There were times during the process where I almost gave up or almost didn’t finish just because of everything we were paying for and all things we had to do to make it happen.”

Martin said his goal with the book was to impact people in a way that Norah and Levi’s friendship had impacted him. Martin believes that God blessed the book, and he explained all of the praise goes to Him. He hopes to reach as many people as possible and make a change.

“I just want to share the story of kindness, love, and acceptance,” Martin said. “It’s a lesson that we can learn from a friendship like Norah’s and Levi’s.”

Levi’s parents wrote a letter (attached below) to the readers that will be printed on the first pages of the book.

Levi’s family has a foundation called Fishers of Men located at 45o Sweatt Road in Steele, a Christian Family Retreat dedicated to helping families reconnect with God and each other.  Through the business of life and the messiness of our sin, we often need to leave it all behind and spend time with the ones who matter most.

Eddie and Dedra Adam recognizes that God uses his precious life to teach their family-specific lessons about God’s incredible love, forgiveness, and generosity, just to name a few. Dedra shares these Lessons From Levi with others as a means to give them another perspective on God’s hand in our lives and His desire to work all things for our good.

Martin explained that he is already working on a couple of different ideas for future books. You can pre-order “I Love You More Than Me” on Amazon now. 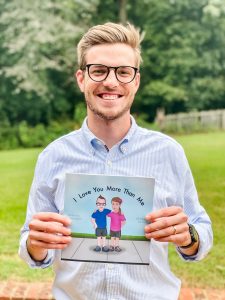 Clayton Martin received the first copy of his book and he is beyond excited to share it with everyone. (Photo courtesy of Clayton Martin) 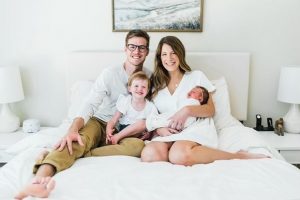 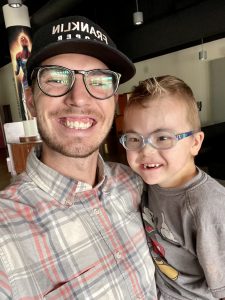