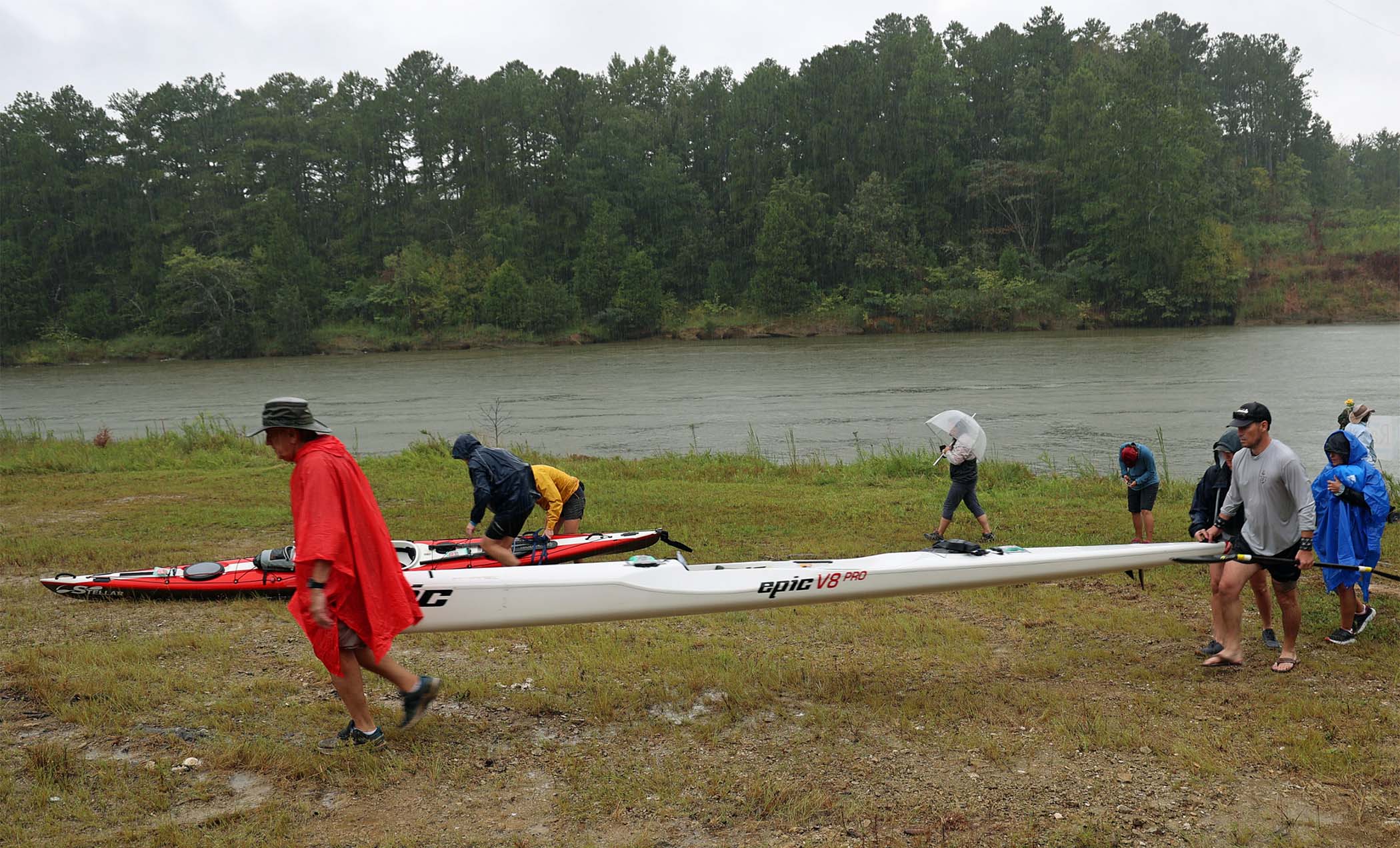 Paddlers in the AL650 had to portage around nine dams during the 650-mile race. (Photo courtesy of Jay Grantland/Great Alabama 650)

With almost perfect weather and water conditions, Paul Cox and Joe Mann shattered the record for the Great Alabama 650 (AL650) paddling race that traversed Alabama from Weiss Lake in the northeast corner of the state to Fort Morgan on the state’s beautiful Gulf Coast. 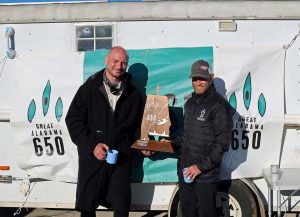 The AL650 started in 2019 as a way to showcase Alabama’s abundant waterways and diversity, according to Laura Gaddy, Communications Director with the Alabama Scenic River Trail.

“We wanted a way to highlight how valuable our waterways are for recreation,” Gaddy said. “We thought, what better way to demonstrate that than to invite the world’s best racers to compete on this course.

“They said the AL650 is one of the toughest courses in the world. They say it’s a paddler’s race.”

The paddlers deem the AL650 one of the most challenging courses because they have to portage around nine dams on the Coosa and Alabama rivers. Once they get to the Mobile River, the portages are finished, but then they must deal with the unpredictable conditions on Mobile Bay.

“We are accomplishing the goal we had when we started the race,” Gaddy said. “People are becoming more aware of how valuable our waterways are. This competition is known internationally among elite paddlers. They put it on their bucket list of events. We think as people recognize our water is so good that elite paddlers are willing to travel across the globe that everybody, even Alabamians, will recognize how unique our resources are.”

The number of entries into the AL650 is capped at 20 to be able to staff the route.

“We want to manage the race in a way that is responsible,” Gaddy said. “Organizing and managing the race is a feat unto itself. We have to have staff at each one of the nine portages.”

Even though the winning team set a new standard for the race, Cox, who lives in Atlanta, said it was not easy.

“It’s extremely hard,” Cox said. “The thing I like about the AL650 is you have so many types of water conditions. You start in the lakes in northern Alabama, and then you get to Wetumpka and get a little whitewater in. The lakes can be very difficult because of all the recreational boating traffic. But this year, I’m guessing because of the overcast and rainy weather, there weren’t many recreational boats on the water. We didn’t have to contend with boat wakes much, which made it better.”

Unlike other races, the AL650 has no sleep requirement, which means that sleep deprivation is another hurdle for some paddlers.

Cox estimated their sleep consisted of an hour at Wetumpka, two hours at Selma, two hours before they entered Mobile Bay, and then a final two hours about two-thirds of the way to Fort Morgan.

“That’s what you have to do to be fast,” Cox said. “Sometimes, you have to fight off the sleep monsters. There were definitely moments when I wasn’t paddling well. I was trying to stay upright, splashing myself with water. You have to talk to each other and tell stories. My partner, Joe, is a great storyteller, but he finally told me no more stories. That’s when I knew we needed to pull over and get some sleep.”

Although the rapids at Wetumpka broke up the routine for the paddlers, Cox especially appreciated Mitchell Lake. 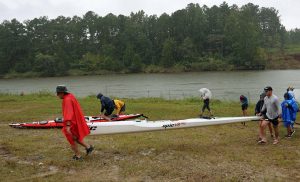 Paddlers in the AL650 had to portage around nine dams during the 650-mile race. (Photo courtesy of Jay Grantland/Great Alabama 650)

“I think the Mitchell Lake section was probably my favorite of the whole race,” he said. “It’s just so beautiful. You have the rock formations that jut out from the eastern side of the lake.

“Then you get to Wetumpka and get a little taste of whitewater. Then you get into the Alabama River, and it gets to be a wider, slower river. But there was obviously a lot of rain this year, so the rivers were moving faster this year. That contributed to the faster pace.”

After the paddlers went through Montgomery and Selma, they found out just what rural Alabama looks like.

“You don’t see many people after Selma,” Cox said. “As a racer, you start having to deal with sleepiness, being tired, and not seeing your crew as often. North of Selma, we would see our crew about every 12 miles. After Selma, we went for stretches up to 50 miles before seeing them.”

The support crew met the competitors with warm clothes, food, and fresh water during the stops. They prepared warm food, like chili or roast beef and mashed potatoes, that they put in Thermos containers for the paddlers to take on the next leg of the race.

“That was the difference,” Cox said. “Our fantastic crew would do anything for us.”

Cox and Mann then got a close-up view of the magnificent Mobile-Tensaw Delta, although it wasn’t as long a visit as last year.

“The river down south was flowing so fast that we made great time,” Cox said.

While Mitchell was the favorite spot for Cox, Mann said traversing Mobile Bay provided a unique satisfaction, even after taking a swim in the Bay’s brackish water.

“I’m not a big ocean guy,” Mann said. “I live in Kansas City, Missouri, about as far away from the ocean as you can get. I’ve never been a fan of the bays. I was not looking forward to it at all. And this year, it ate us. We tipped over. We had to use a lot of energy to get back in the boat. We were more than 90 percent to the finish. We decided it could all fall apart right here, so we stopped, got dry, got something to eat, and slept.”

That stop gave the team enough energy to tackle the Bay with waves building from an early cold front, prompting small craft advisories.

“It was the hardest thing I’ve had to do – get back out there in the dark and fight those waves,” Mann said. “But we knew if we wanted to win, that’s what we had to do. As it turned out, honestly, we had a lot of fun. We figured out the pattern of the waves and how to do it. Paul did a masterful job of steering the boat. The last four hours, we had it down. I felt like we could take on anything. I was tired, but we had a much higher level of confidence.

“Anytime the big rollers came in, we began to recognize the angles of the waves. There were two different sets of wave currents that would cross each other. We would ride one and jump on the next one. The Bay ended up being quite fun.”

Mann said he and Cox learned a great deal from last year’s race and utilized that knowledge to shave as much time as possible.

“The first time you do something like this, it’s a magical sense of adventure, and everything is new,” Mann said. “The second time, you have the learning curve. When we looked back, it was so much fun, but we made a lot of mistakes. With a course this long, there’s a lot of room for mistakes, which adds up to a significant amount of time.

“I think the difference this year was we approached this a lot more analytically. It’s not that we didn’t want to have fun, because we did. Before, it was a magical adventure. This time it was how were we going to execute our plan to stay in the boat and keep moving. Obviously, we did that by beating our old time by almost 30 hours.” 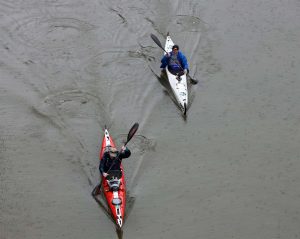 Cox would not commit to attempting a three-peat because of the logistics of such a long race. He does not count it out, though.

“What makes the 650 so cool is the varied conditions you have to contend with,” he said. “You have lakes, rivers, whitewater, and the bay. It’s quite a challenge. I’ve been competing for 15 years. I’ve done races in the Yukon Territory. I did the 1,000-mile race up there a few years ago.

“But this one is special because of the diversity of habitat. You’ve got mountains and swamps. You see everything from great blue herons to eagles. You always feel like you’re in the real natural world. I think it’s a great race. Alabama is so beautiful. Alabama has a lot to offer for sure.”

For those who love to kayak or canoe but prefer a leisurely paddle along some of the most scenic vistas in Alabama, consider a trip down the Bartram Canoe Trail or the Perdido River Canoe Trail. The trails developed and now managed through the Alabama Department of Conservation and Natural Resources State Lands Division and Forever Wild Land Trust cover 196 miles of water.

Visit www.alabamacanoetrails.com for information on both trails.