An overhead view shows the variety of EVs on display at the National Drive Electric Week EVent at The Market at Pepper Place in Birmingham on Saturday, Oct. 2, 2021. (Photo by Zack Stovall)

BIRMINGHAM — National Drive Electric Week, which runs from Sept. 25 to Oct. 3 this year, is a nationwide observance to raise awareness of the benefits of all-electric and plug-in hybrid cars, trucks, motorcycles, and other vehicles. Three NDEW EVents were held in Alabama this year – today in Birmingham, this past Wednesday in Auburn, and Saturday, Sept. 25 in Huntsville. 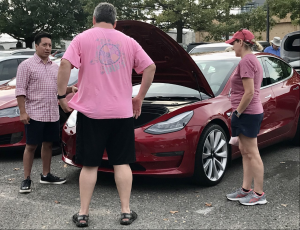 Gonzalez provided plenty of answers about charging and other topics about electric vehicles (EVs) at Saturday’s National Drive Electric Week EVent at The Market at Pepper Place in Birmingham. He was one of about two dozen EV owners who talked 1-on-1 with visitors and showed off their cars.

“There are a lot of questions about range – where you charge, how you charge, how long you have to charge,” said Gonzalez, a Birmingham resident. “That seems like it’s a question on everyone’s mind.”

Gonzalez, like most EV owners, charges almost exclusively at home and rarely needs an away-from-home booster, which he added is something most motorists don’t know.

“That’s what makes the car fun to drive,” said Nichols, a Birmingham resident. “When I’m at a red light, I don’t think anything anyone beat me off the line, except maybe the Tesla.”

Added Gonzalez, “That instant torque is what surprises people. It’s like a rollercoaster. I’ve had people ride in my car, and they screamed like it was a rollercoaster.” 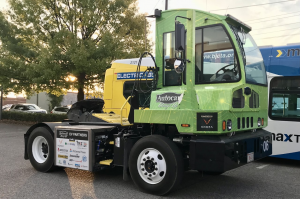 Birmingham-based Autocar displayed one of its new electric terminal tractors at the National Drive Electric Week EVent at The Market at Pepper Place in Birmingham on Saturday, Oct. 2, 2021. (Alabama Clean Fuels Coalition photo)

The testimonials from Gonzalez and Nichols illustrate why NDEW EVents can be beneficial for anyone considering an electric vehicle, said Alabama Clean Fuels Coalition Executive Director Mark Bentley. Research shows most Alabamians have never driven an EV, but many want to and find EV owners the most trusted source for information.

Visitors to Birmingham’s NDEW EVent perused a variety of EVs on display, with owners showing off models from Audi, BMW, Chevrolet, Kia, Nissan, Volvo, and Volkswagen. The cars on display have logged more than 1 million miles driven, according to event organizers.

“There’s really no replacement for talking to real-life EV owners who can talk about their real-world experiences of driving an EV every day, how and when they charge them, and how much money they save,” Bentley said. “It’s critical that we continue to educate people about the many benefits offered by EVs as more are showing up on Alabama roads.”

Birmingham-based Autocar, one of the world’s leading manufacturers of heavy-duty trucks, also displayed one of its new electric terminal tractors, and Max Transit showed off an all-electric bus. 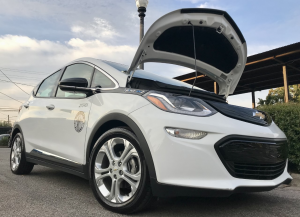 A Chevy Bolt was one of the cars on display at the National Drive Electric Week EVent at The Market at Pepper Place in Birmingham on Saturday, Oct. 2, 2021. (Alabama Clean Fuels Coalition photo)

Most automobile manufacturers have embraced the EV revolution and announced major investments in EV technology and manufacturing. In late September, for instance, Ford announced an $11.4 billion investment to create new factories in Tennessee and Kentucky for EVs and batteries to power the vehicles. Ford also plans to begin selling its all-electric F-150 Lightning pick-up next year.

Alabama automakers, led by Mercedes-Benz’s plant in Tuscaloosa, have announced an estimated $1.88 billion in new investments in advanced vehicle technology since 2018. In addition, Alabama’s leaders understand the growing popularity of EVs, including the latest efforts through ADECA to significantly expand EV infrastructure.

Dozens of battery electric (BEV) or plug-in hybrid electric vehicles (PHEV) models are available. Newer EV models boast a longer range and better performance than the original models, and some start in the mid-$20,000 price range, and consumers can be eligible for a federal tax credit of up to $7,500.

About the Alabama Clean Fuels Coalition