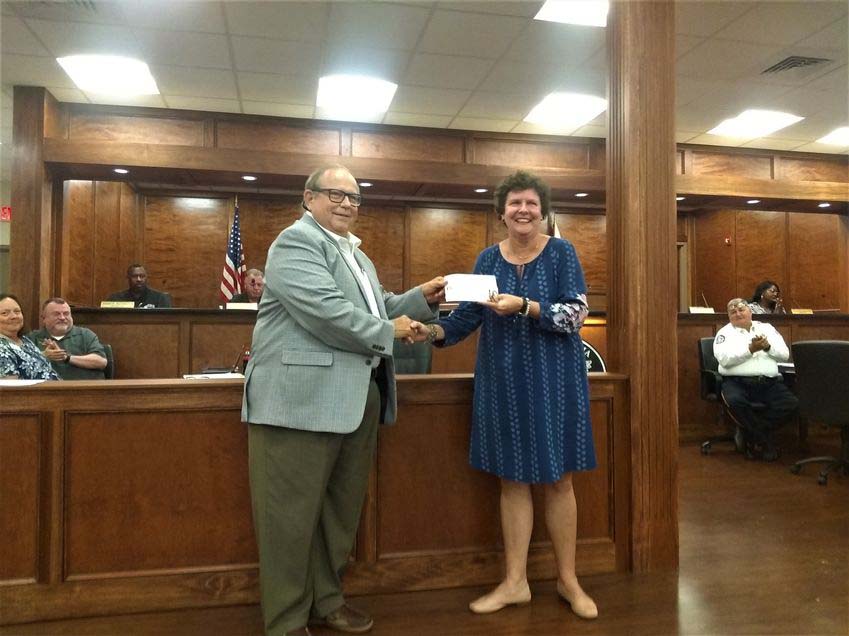 LEEDS – George Bowman, a project manager for a proposed center by Priority Soldier Inc. to serve veterans, spoke to the Leeds City Council during a regular meeting on Monday, October 4. 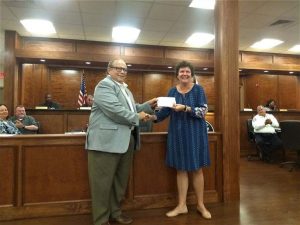 Leeds Mayor David Miller presented a check for $10,000 to Audrey Bryan, who is director of the senior center.

Priority Soldier Inc. would use the Moton Center in Leeds to serve veterans in Jefferson, Shelby, and St. Clair Counties. Marbury stood and spoke briefly, citing the suicide rates of veterans as a motive in establishing a place to provide mental health services.

“The suicide rate for our veterans is unacceptable,” Marbury said. “We in Leeds and Jefferson and Shelby and St. Clair have decided to look into it and see if we could put forth an example of what all cities and towns should be doing.”

Bowman then gave a presentation, further addressing mental health, as well as housing, for veterans.

“We have a crisis in the veteran community,” Bowman said. “A very serious crisis. That crisis is homelessness and suicide.”

He cited several statistics, saying that since the September 11, 2001 attacks and the subsequent wars, more soldiers have lost to suicides than to combat. Specifically, 30,177 veterans have committed suicide, he said.

“This is a problem not only in the state of Alabama but a problem nationally,” Bowman said.

Bowman also stated that there are approximately 37,000 known homeless veterans. 80%, he said, have cited shame and embarrassment as a “barrier” to getting help. In addition, veterans commonly experience PTSD and TBI (traumatic brain injury) from their overseas experiences, leading to suicide and homelessness.

Bowman said that there are also a high number of suicides among Vietnam War veterans as well. , However, similarly, more Vietnam veterans have died by suicide than through combat, he stated.

The proposal would have Priority Soldier Inc. partner with the City of Leeds and the Moton Center to provide psychological counseling for veterans. It would also have a community center, a senior center, and a recreational center for sports. It would also provide access for homeless veterans to obtain housing. In addition, the community center will offer tutoring and scholarship services, as well as a food pantry.

Additionally, there would be administrative services for veterans’ benefits. Bowman said that the Director of the Alabama Department of Veterans Affairs, Kent Davis, had expressed his support for the project. 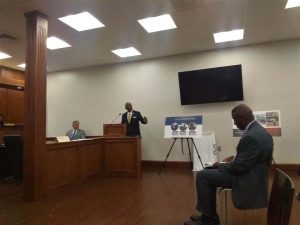 Retired army general George Bowman gives a presentation to establish a counseling center in Leeds for veterans. Priority Soldier Inc. CEO and Co-Founder Ken Phillips can be seen on the right.

Bowman stated that the center would create jobs for Leeds and the tri-county area and serve as an economic benefit to the city. Funds for the project would be received from grants from the state, county, and federal levels and pro-veteran organizations.

Mayor David Miller said that the council would meet for a work session to discuss details as the matter is considered.

Earlier in the meeting, Social Services Department and Senior Center Director Audrey Bryan has presented a $10,000 check from Miller. He asked Bryan to stand before those attending where he presented the check, commenting on Bryan’s direction of the senior center and saying that he contacted the Jefferson County Commission, which granted the money.