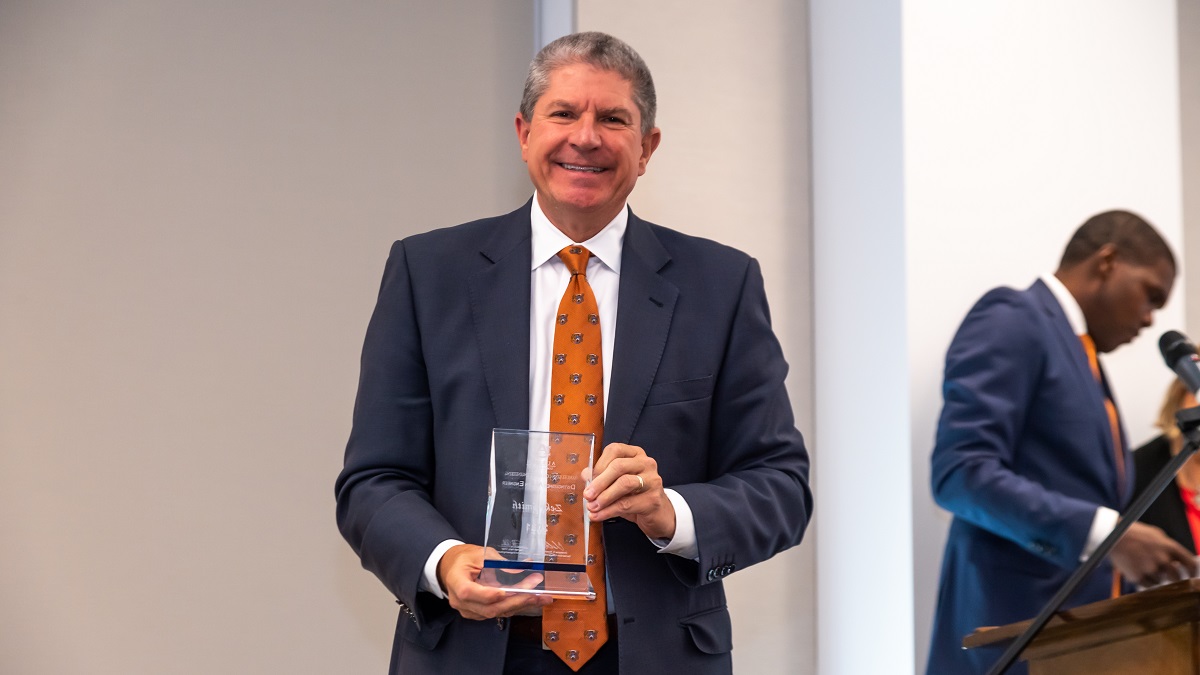 AUBURN — Nine engineering alumni and one longtime employee of Auburn University’s Samuel Ginn College of Engineering were recently honored during an awards ceremony by the Auburn Alumni Engineering Council for their distinguished professional careers. 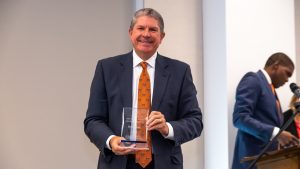 Trussville’s Zeke Smith, executive vice president of External Affairs for Alabama Power, was among those recognized as a Distinguished Auburn Engineer, one of the college’s highest honors.

“I’m grateful and humbled to receive this great honor, and to be recognized alongside those that have made such a difference in so many ways,” Smith said during the ceremony. “Thank you to the Auburn Alumni Engineering Council for this award. And to Dean Chris Roberts and the professors who wake up each day with a passion to educate the next generation of leaders for Alabama.”

Smith highlighted the valuable skills gained during his time on The Plains.

“The engineering disciplines I learned at Auburn have made a difference throughout my career,”  he said. “Disciplines such as perseverance and problem-solving skills, as well as the importance of engagement and teamwork.” 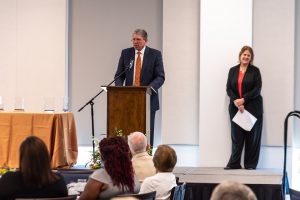 Zeke Smith, ’82 Industrial Engineering
Zeke Smith graduated from Auburn in 1982 with a degree in industrial engineering. Before his current role, Smith served as vice president of Financial and Regulatory Planning, vice president of Regulatory Services and director of Regulatory and Pricing. He is now executive vice president of External Affairs at Alabama Power and chairman of the Alabama Power Foundation’s Board of Directors. He serves on the Samford University Board of Trustees, the boards of directors for the Business Council of Alabama, the Birmingham Business Alliance, the Alabama Sports Hall of Fame and the Bryant-Jordan Foundation. Smith is also a member of the Birmingham Bowl Executive Committee.

In service to Alabama, Smith was appointed in 2020 by the governor as president of the Innovate Alabama commission’s advisory council. He was also appointed to and served as chairman of the Alabama Workforce Council. Additionally, he was appointed to and served as a member of the Tornado Recovery Action Council of Alabama and the College and Career Ready Task Force. For his professional achievements, Smith was inducted into the State of Alabama Engineering Hall of Fame in 2019.

Carol Godfrey, ’86 Industrial Engineering
Carol Godfrey earned her bachelor’s degree in industrial engineering in 1986 before starting her career in manufacturing and product development. She joined Southwire Company in 2006 as the vice president for marketing and product development. Godfrey was quickly promoted throughout her career at Southwire and served as the senior vice president for products and markets before retiring. As senior vice president, she expanded Southwire’s markets in North America and was responsible for leading the development of new products and service offerings, including strategic partnerships, new product manufacturing and acquisitions.

While climbing the ranks at Southwire, Godfrey did not stop giving back to Auburn Engineering. She has served on the Auburn Alumni Engineering Council since 2018, the Industrial and Systems Engineering Advisory Board since 2015 and was instrumental in forming the 100+ Women Strong Program, of which she has been a member since 2012.

Godfrey and her husband, Gary, helped establish the Dr. Saeed Maghsoodloo Annual Assistantship in Industrial and Systems Engineering. They have also given to the Engineering Keystone Society, and through support of the Brown-Kopel Engineering Student Achievement Center, Café 25 was named in her husband’s honor.

In 2013, Godfrey was recognized as a Woman of Distinction by Auburn Women’s Resource Center.

Ed Lewis, ’72 Industrial Engineering
Ed Lewis is a 1972 industrial engineering graduate who built a highly successful career in the private sector. He began his career at Textron Corporation before moving on to the Georgia Tech Research Institute. The bulk of his career in the private sector was spent at Mars Inc., where he began as a systems engineer and rose to plant manager and then director of engineering. His time at Mars culminated with his retirement as the vice president of manufacturing and supply chain. Lewis is widely known as an extremely accomplished engineer who helped shape Mars’ success through increased production productivity and improved system processes.

Following his retirement, Lewis was called home to serve his alma mater. With forethought for the future of engineering, he constructed a business plan, assisted with funding and served as a corporate liaison with Siemens Corporation for the construction of the Auburn University MRI Research Center. He has helped build relationships with the medical community, specifically the University of Alabama at Birmingham, and other engineering medical institutions to position Auburn Engineering as a leader in MRI research.

Lewis serves as senior adviser to the dean at the Samuel Ginn College of Engineering. He also led the college’s development efforts during the recent “Because This is Auburn” campaign, raising more than $247 million toward support for student scholarships and fellowships, student programs and faculty, and facility upgrades. His impact at Mars and in the Samuel Ginn College of Engineering will be felt for generations.

Gerald Pouncey, ’82 Chemical Engineering
Gerald Pouncey earned a bachelor’s degree in chemical engineering in 1982 and went on to complete his Juris Doctor in 1985. Pouncey serves as chairman at Morris, Manning and Martin LLP, and has been voted as one of America’s Leading Lawyers for Business by Chambers USA. He was named a Georgia Super Lawyer by Atlanta Magazine, honored as an Energy and Environmental Trailblazer by the National Law Journal in 2016 and named Environmental Lawyer of the Year by the Best Lawyers in America in 2017.

In addition to his outstanding law career, Pouncey has given back generously to Auburn Engineering. He has supported building renovation projects in Ross Hall and the Shelby Center. He has also given in support of Keystone and Engineering unrestricted funds. He is a member of the Foy Society, 1856 Society and Engineering’s Keystone and Ginn Societies.

Regenia Sanders, ’95 and ’99 Mechanical Engineering
Regenia Sanders graduated in 1995 with a bachelor’s degree in mechanical engineering and went on to earn a master’s degree in mechanical engineering in 1999. She serves as the principal at Ernst and Young LLP (EY) and as the EY consulting US-central supply chain and operations leader. She has 22 years of experience driving supply chain assessment and transformation projects, spanning sourcing, procurement and planning to fulfillment for Fortune 500 and private equity portfolio companies.

Her philanthropic support extends to scholarships, Engineering unrestricted funds, the Brown-Kopel Engineering Student Achievement Center and 100+ Women Strong. For her support of Brown-Kopel, a space was named in her honor. She is a member of the Auburn Engineering Council, the George Petrie Society, the Samford Society and the Circle of Excellence Society.

A generous supporter of Auburn Engineering, Belinga has given philanthropically in support of scholarships and the Department of Computer Science and Software Engineering. She is also a member of 100+ Women Strong.

Belinga is a member of the Petrie Society, Foy Society, Engineering Eagles Society and the Computer Science and Software Engineering Advisory Board.

She is a recipient of the “Grow with Google” scholarship challenge for Android developers.

Hill’s dedication to Auburn Engineering is showcased in his volunteer service. He has helped Auburn’s mentor and mock interview program for the past few years.

During the height of the COVID-19 pandemic, Hill collaborated with Auburn Engineering professors to help develop the RE-InVENT CPAP to emergency ventilator project in the spring of 2020.

TJ Pruitt, ’05 Electrical Engineering
TJ Pruitt is a 2005 graduate with a bachelor’s degree in electrical engineering. Following graduation, Pruitt served as an engineering supervisor for Alabama Power, where he was responsible for managing a team of engineers and line crew for the Clanton region. He serves as the contract services supervisor for Mississippi Power.

He has served as the campus recruiter for Alabama Power and Mississippi Power and assists Auburn students in full-time, co-op and internship searches with Southern Company subsidiaries.

Pruitt was also the first male member of 100+ Women Strong.

Karcher built what is now known as Engineering Student Services from the ground up. During his time, he continued to build on the student services offered while maintaining and building on quality.

Similarly, Karcher took the idea of an Engineering Global Program and made it happen. What started out with a handful of students, faculty and few alumni volunteers has blossomed into a program that takes Auburn engineers to dozens of countries around the world. In retirement, Karcher continues to serve as a consultant with the Engineering Global Program, expanding the horizons and relationships for the College of Engineering, its students and faculty.

The Auburn Alumni Engineering Council (AAEC) was formed in 1966 as a group of Auburn Engineering alumni who work together to support the vision and goals of the Samuel Ginn College of Engineering. The council meets twice annually to assist and advise the college, and its members serve on a variety of committees geared to the mission and operation of the college. Council members are an active and valued component of the College of Engineering family. They demonstrate a continuing commitment to move the college to new levels of excellence. The council provides leadership and participation in areas such as academics, development, governmental affairs and public relations.