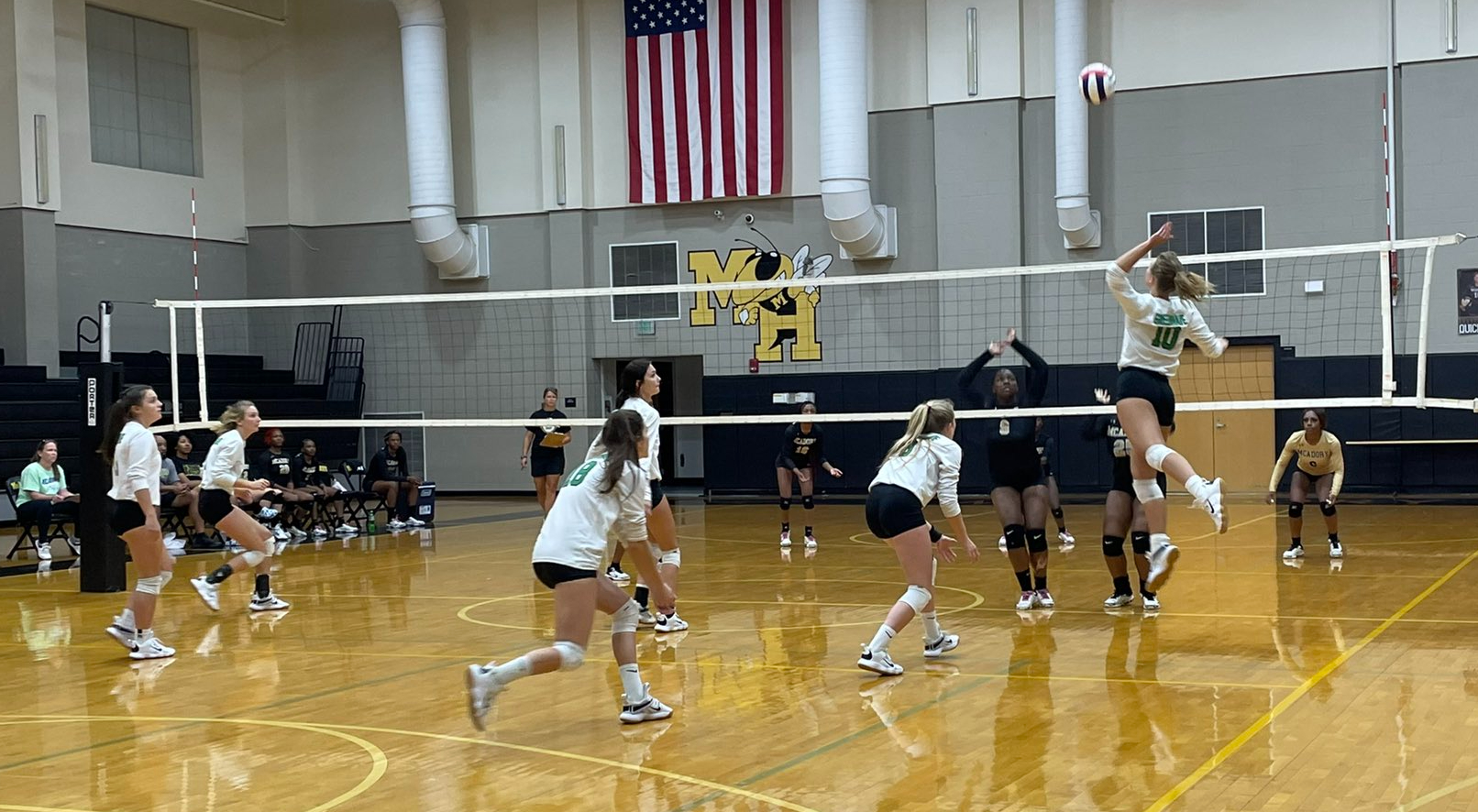 Leeds outside hitter Darcy Phillips leaps up for a kill as the Green Wave beat McAdory in four sets on Thursday, October 7, 2021. The Green Wave lost 3-0 to Guntersville in the 5A regional tournament to end their season on October 20, 2021. (Photo by Bobby Mathews)

MCCALLA — The Leeds volleyball team ended its 2021 season with a bang, winning a four-set slugfest against McAdory here on Thursday night. 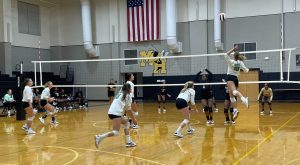 Leeds outside hitter Darcy Phillips leaps up for a kill as the Green Wave beat McAdory in four sets on Thursday, October 7, 2021. (Photo by Bobby Mathews)

“I think we lost a little concentration there in the third set,” senior setter Briana McLaughlin said after the win.

In the early going, that wasn’t a problem. Leeds jumped on McAdory early in the first set, going up 5-1 and then extending the lead to 13-4 before the Yellow Jackets fought back to close the gap and trying to sway momentum their way. Emma Grace Payne put a stop to that effort with a huge kill to make it 20-15 and junior Sophie Sisk’s serve brought Leeds to match point.

In the second set, the Green Wave looked dominant. The Leeds squad has won seven of its last eight and has looked sharp doing it. McLaughlin, Zoie Galloway and Hannah Scott found their timing at the net against McAdory, stepping up to block the Yellow Jackets and baffle them defensively.

In the third set, however, the Yellowjackets stormed out to a 5-1 lead and pulled further ahead after the Green Wave clawed back to a two-point deficit at 7-5.

The fourth set saw Leeds take control again, as Emma Richerzhagen’s serve staked the Green Wave to an early lead, while back-to-back kills from Payne made it 7-2. Scott chipped in with a service ace and a big kill as well to bring the score to 15-5. Junior outside hitter Darcy Phillips punctuated the final point with a huge kill that made it 25-20 in the fourth set.

Galloway, a senior who competed this year after recovering from a severe car accident, has been pushing the pace for the Green Wave with her serve and overall play.

“It feels good to win like this,” Galloway said. “Especially the energy we brought tonight. It’s hard when you play on the road and you don’t feel like you have any energy.”

McLaughlin was focused on the area tournament, which Leeds will host. On Wednesday, October 13, the Green Wave plays Center Point to start their pursuit of an area title.

“We have the area tournament starting next Wednesday,” McLaughlin said. “I’m excited about that, and I hope that we can bring a lot of that energy.”

For the seniors on this team, Wednesday’s win was bittersweet.

“I remember I was pulled up on varsity my sophomore year and all my friends were seniors on the team,” McLaughlin said. “And they were like ‘oh, last first practice,’ or ‘last first home match,’ and now it’s me.”

But the Green Wave isn’t looking at Thursday night’s victory as the end of the road. Instead, hosting the area tournament, it may just be the beginning.