HOOVER — The Shelby County Coroner identified the body of two victims found on Thursday, October 7, after their vehicle was swept away in the flash flood. 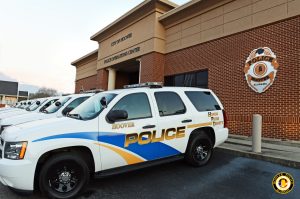 According to the Shelby County Coroner’s Office, Latin Marie Hill and Myles Jared Butler, both 23, of Birmingham, drowned when their car was swept away by floodwaters in the 1100 block of Riverchase Parkway West.

Hoover Police Department states the victims’ bodies were recovered from their submerged vehicle approximately 75 to 100 yards from where the car was last sighted around 9 a.m. on Thursday, October 7. Crews continue to work to remove the car from the water.

“It’s heartbreaking for the first responders to respond there and try to do everything you can to save those people and ultimately not be able to,” Hoover Police Lieutenant Keith Czeskleba said. “It’s very tragic for all first responders to have to go through something like that.”

Czeskleba explained that he had spoken to residents in that area and had never seen water traveling over the bridge in the past, stating that “it was unprecedented for our city to have to deal with in that particular area.”

Mayor Frank Brocato said that there are several areas in Hoover where they receive unprecedented large amounts of rain, and first responders “move out quickly and barricade those areas.”

The incident occurred when Hoover Police and Fire Department responded to a vehicle trapped in rising floodwater on Riverchase Parkway West near Fox Creek Circle around 8:30 p.m. on Wednesday, October 6.

“The occupant of that vehicle was rescued, and fire rescue left that scene to respond to other water rescues,” Czeskleba said. “Hoover police remained to block the road on the east side of Riverchase Parkway West. Within approximately 10 minutes, a second vehicle entered the flooded area from the opposite side of the roadblock and was immediately disabled due to the Flood. The vehicle began floating down the roadway and became pinned against the guardrail, trapping the occupants. Fire crews returned to the scene but were unable to access the occupants due to the swift water and the vehicle’s location. The water lifted the vehicle over the guardrail and out of sight of first responders. Police and fire crews worked through the night in an effort to locate the vehicle and its occupants.”