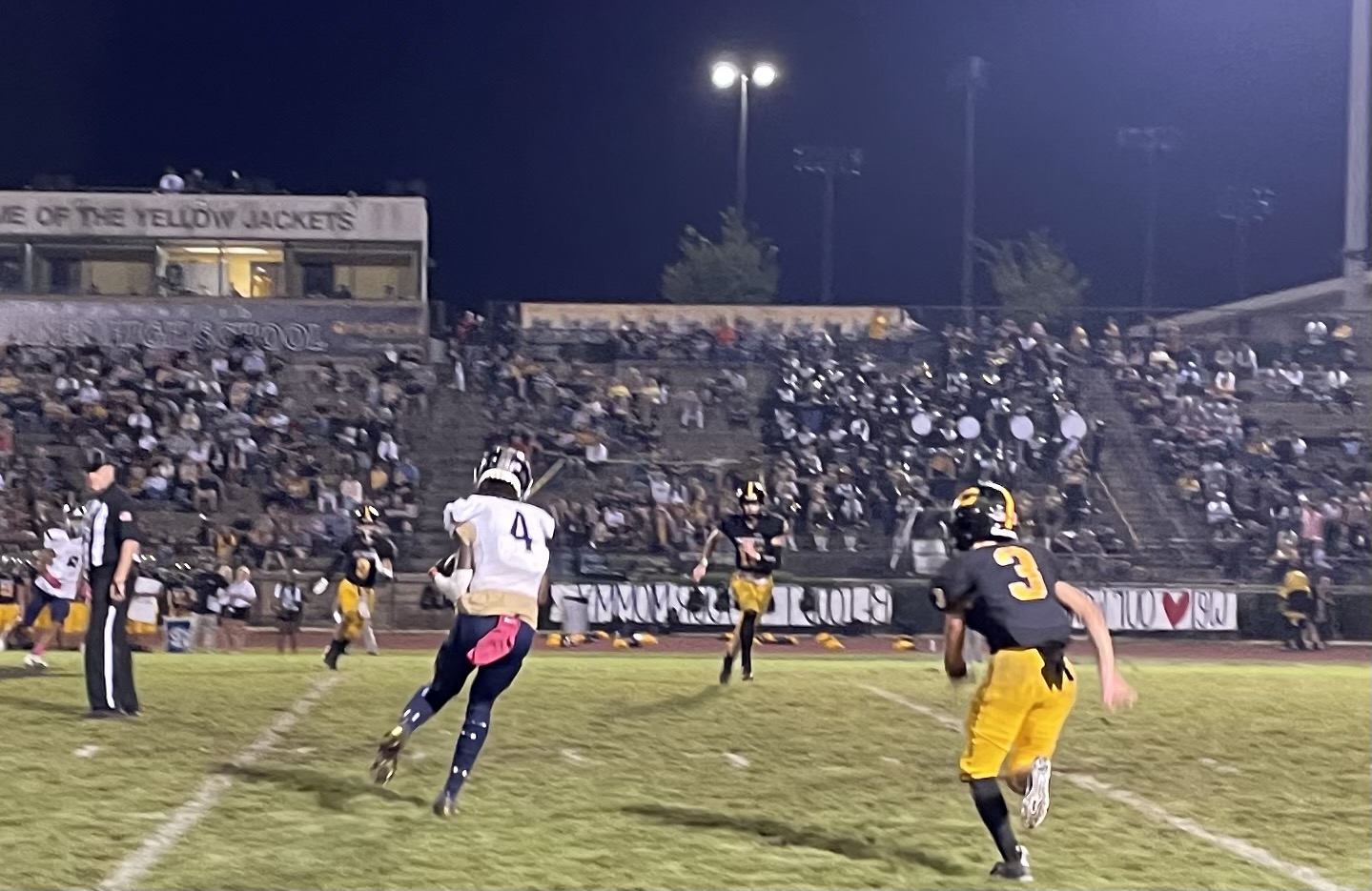 CORNER — Cam Benefield stepped up when the Moody Blue Devils needed him the most, blowing past everyone on a 72-yard touchdown run up the middle to break Friday’s game against a tough Corner team wide open with 53 seconds left in the third quarter. 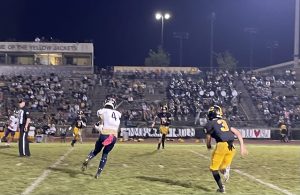 Davion Dozier exploits the seams in Corner’s defense for a first down as Moody beat the Yellow Jackets 41-13 on October 8, 2021. (Photo by Bobby Mathews)

The Blue Devils (5-2, 3-2) went in at halftime up 21-0, with a dominant effort on defense keyed by linebacker Michael McDonald. Moody allowed only two first downs in the half. But in the third quarter, Corner began to show signs of life. Running back Gavin Brown went 45 yards on a run straight through the guts of the Moody defense, and then the Yellow Jackets got the ball back on a fumble on the Blue Devils’ next possession.

Corner quarterback Landon Peterson hit Jace Boyd in the flat on a fourth-and-11 play, and Boyd did the rest, moving through traffic and scooting into the end zone for a 27-yard touchdown. The PAT was no good, but the score was 21-13 and the Yellow Jackets had momentum.

“They came out playing hard, and we had our worst possession, I think, of the season,” Moody head coach Adam Wallace said after the game. “On that first possession we had a dropped ball, missed the wide-open receiver, and we had a holding penalty. When you do those type things, you’re not successful. And then they did what Corner does: hand it off to the big running back and let him run downhill.”

Early on, it was all Blue Devils. After holding the Yellow Jackets to a three-and-out, Moody went big on its first offensive play when A.J. Wallace hit Davion Dozier over the top for a 69-yard bomb to stake Moody to a 6-0 lead after a missed extra point.

Defensively, McDonald had 18 tackles, three tackles for loss and a sack. Gavyn Baker added eight tackles and a sack.

The offensive line showed out in the first half as well, with senior Logan Suggs and junior Mason Myers providing Wallace with time to throw, and Moody managed to get a couple of extra possessions in that first half by recovering a pair of pooched kickoffs after scoring. When Wallace hit Kolby Seymour for a 42-yard score with 6:23 in the half, it looked as though the game was over before it began.

Instead, the Blue Devils were bedeviled by penalties and an inability to move the ball for most of the third quarter. The Yellow Jackets started their first three possessions of the second half on the Moody side of the 50, and were finding a way to turn the tide … until Benefield stepped up to score.

After that, it was all Moody again. The defense clamped down as Suggs and McDonald were able to get penetration and shut down the running game that had been gashing Moody earlier in the half. Wallace tossed a six-yard score to Dozier with 5:10 left in the game, and then Blayne Burke scored from a yard out to make the final score 41-13.

Next week, Moody hosts Alexandria in a region game that will also be the Blue Devils’ final home game of the season.