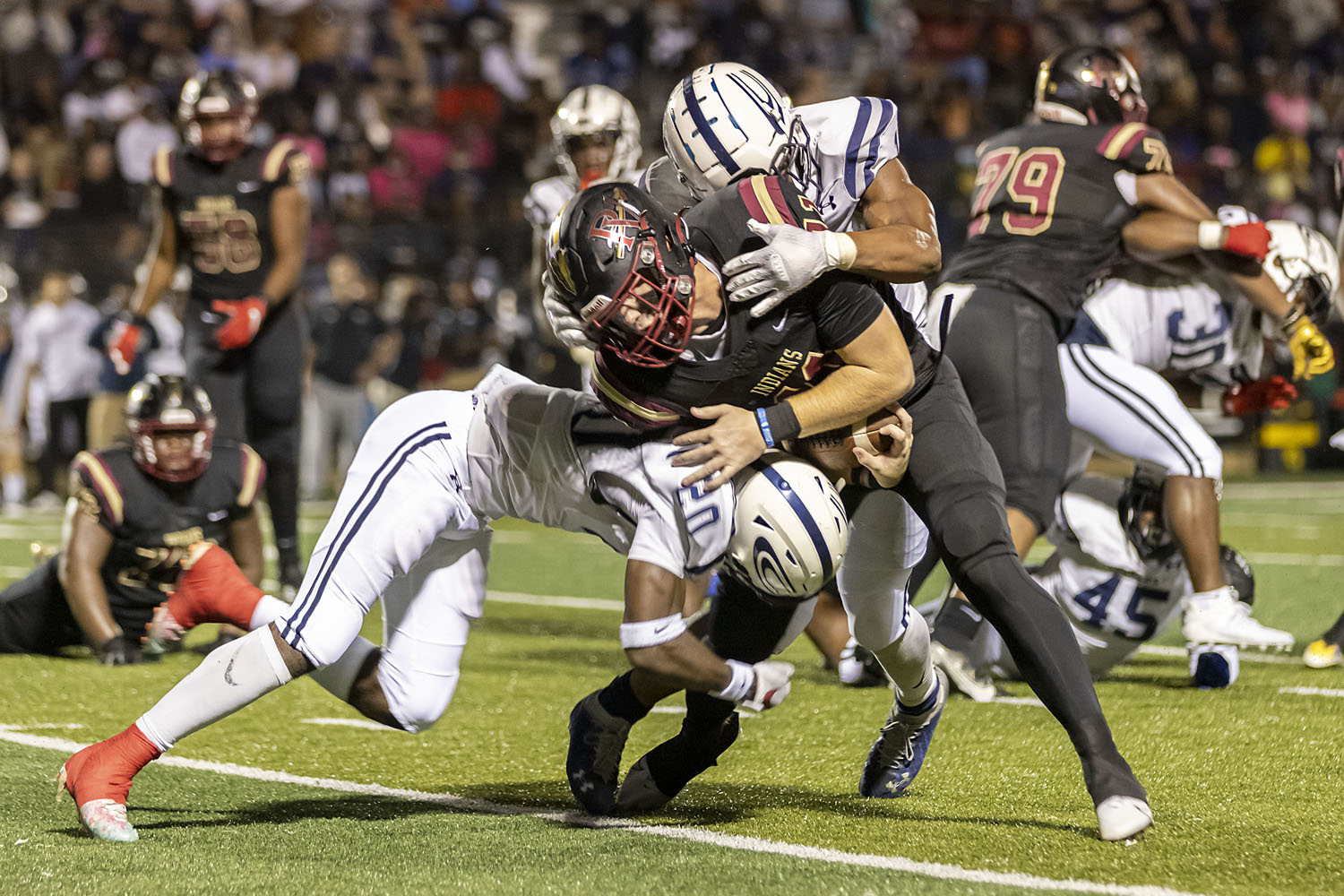 Pinson Valley's Zach Pyron had a tough night in a 42-23 loss to Clay-Chalkville. The senior quarterback threw four interceptions in the game. (Photo by Ron Burkett)

PINSON — No. 1-ranked Clay-Chalkville exorcised some demons here on Friday night, whipping Pinson Valley 42-23 and claiming the 6A Region 6 crown.

For Pinson Valley, everything that could go wrong did go wrong. Quarterback Zach Pyron threw four interceptions, including three in the first half, and the Indians also lost a pair of fumbles. They were penalized 10 times for 109 yards. 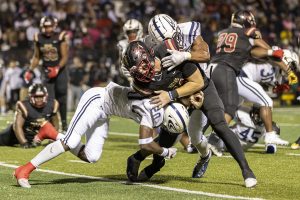 Pinson Valley’s Zach Pyron had a tough night in a 42-23 loss to Clay-Chalkville. The senior quarterback threw four interceptions in the game. (Photo by Ron Burkett)

But the biggest problem for Pinson Valley was wearing Clay-Chalkville’s No. 22 jersey. Senior running back Ed Osley went off, scoring five touchdowns — including three in the first half — against the Cougars’ cross-county rivals and racking up nearly 200 yards on the ground.

“I really have to thank my offensive line,” he said after the game. “They really make it happen. They’re the ones who open up the holes so that I can run.”

Osley, who is two yards shy of 1,100 yards for the year with two games left to play in the regular season, isn’t regarded as one of the fastest backs on the field.

He may instead have to settle for being the best.

“I always plan on giving him the ball 31 times,” said Clay-Chalkville coach Drew Gilmer. “Why wouldn’t I? We’re not very good coaches if we don’t. He just did a phenomenal job. People are missing out on that kid.”

But early on, Pinson Valley’s defense stopped Osley and forced the Cougars to turn the ball over on downs near the goal line. The Indians had just gone up 7-0 on a 34-yard touchdown pass from Pyron to Amare Thomas and stopped Clay-Chalkville cold on the Cougars’ first drive.

They got the ball back, but Pyron threw the first of his interceptions — this one to Jaylen Sweeney, who was tackled at the three-yard line. Osley took the ball into the end zone two plays later for the first of his scores.

Moments later, Osley scored again — this time from 28 yards out. And then Khalib Johnson found Mario Craver on a 19-yard touchdown pass on the first play of the second quarter. Three minutes of game clock had elapsed, and Clay-Chalkville had put a dizzying 18 points on the board.

Pinson Valley wasn’t done, however. Pyron ran in a 17-yard touchdown and converted a two-point play to make the score 18-15 in favor of the Cougars. That would be the closest the Indians would get to the lead, however.

“I’m really proud of our team,” Gilmer said. “We just have to make sure we continue to prepare in the right way and don’t overload them. Winning the region is a big deal, especially coming to the playoffs when you get a home game.”

The Cougars hadn’t beaten the Indians since 2015, and in that span Pinson Valley won three state championships. This victory was a long time coming, said senior wide receiver and defensive back Marquarius White, who intercepted Pyron twice. White and his Clay-Chalkville teammates didn’t want to leave the field afterward, and it was easy to see why.

“This feels so good,” he said afterward. “They beat us every year I played before this. Until now.”

With the win, Clay-Chalkville clinched the region crown and secured a No. 1 seed in the 6A playoffs.