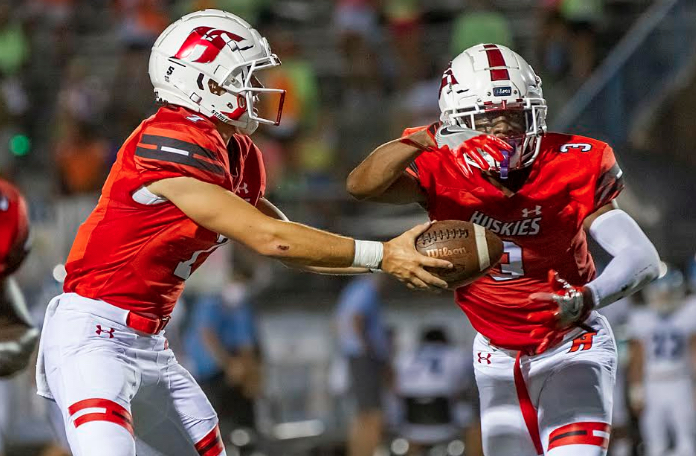 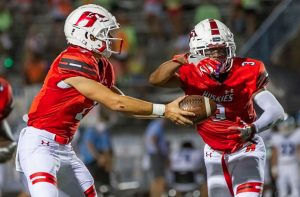 Oak Mountain blocked a punt with less than a minute gone in the game, and then backup quarterback Will O’Dell threw a 22-yard touchdown to Jackson Blackwell with 11:02 left in the first quarter. The PAT made it 7-0, and Oak Mountain would hold the lead for the rest of the quarter.

Peyton Floyd got the Huskies on the board with 8:33 remaining in the first half, hitting senior wideout Jordan McCants for a 19-yard touchdown pass. The PAT tied things up, 7-7, and then the Omari Kelly show started.

Kelly caught three touchdown passes on the night for 154 yards, including an 83-yard touchdown pass from Floyd to put the Huskies ahead with 4:22 left in the second quarter. CJ Curtis added the PAT, and the Huskies led 14-7.

Senior signal-caller Cade Ott Carruth returned from injury in this game, splitting time with Floyd. Carruth looked a little shaky to begin, going 1-for-10 to start things off. However, Carruth found Kelly for two touchdown passes, including a 37-yard score with less than a minute to go in the half to put Hewitt-Trussville up 21-7 going into the break.

James Hammonds ran the ball 17 times for Hewitt-Trussville, picking up 127 yards, including 110 yards in the first half alone.

The win puts the  eighth-ranked Huskies at 8-2 for the season, and 5-2 in region play, locking up the No. 3 spot in Class 7A Region 3. Hewitt-Trussville will travel to play Bob Jones in the first round of the playoffs.

However, the story coming out of this game was one of dominant defense. Hewitt-Trussville had a little help on that end, due to Oak Mountain quarterback Evan Smith sitting out the game, and they took full advantage of it. The Huskies held Oak Mountain to zero — that’s right, zero — rushing yards for the game and holding their opponents to 85 total yards.

The Huskies forced two interceptions and were able to limit Oak Mountain to four first downs for the entire game.

By contrast, Hewitt-Trussville ran up 468 yards of total offense on 73 plays and 20 first downs.

This was the final regular-season game for the Huskies.