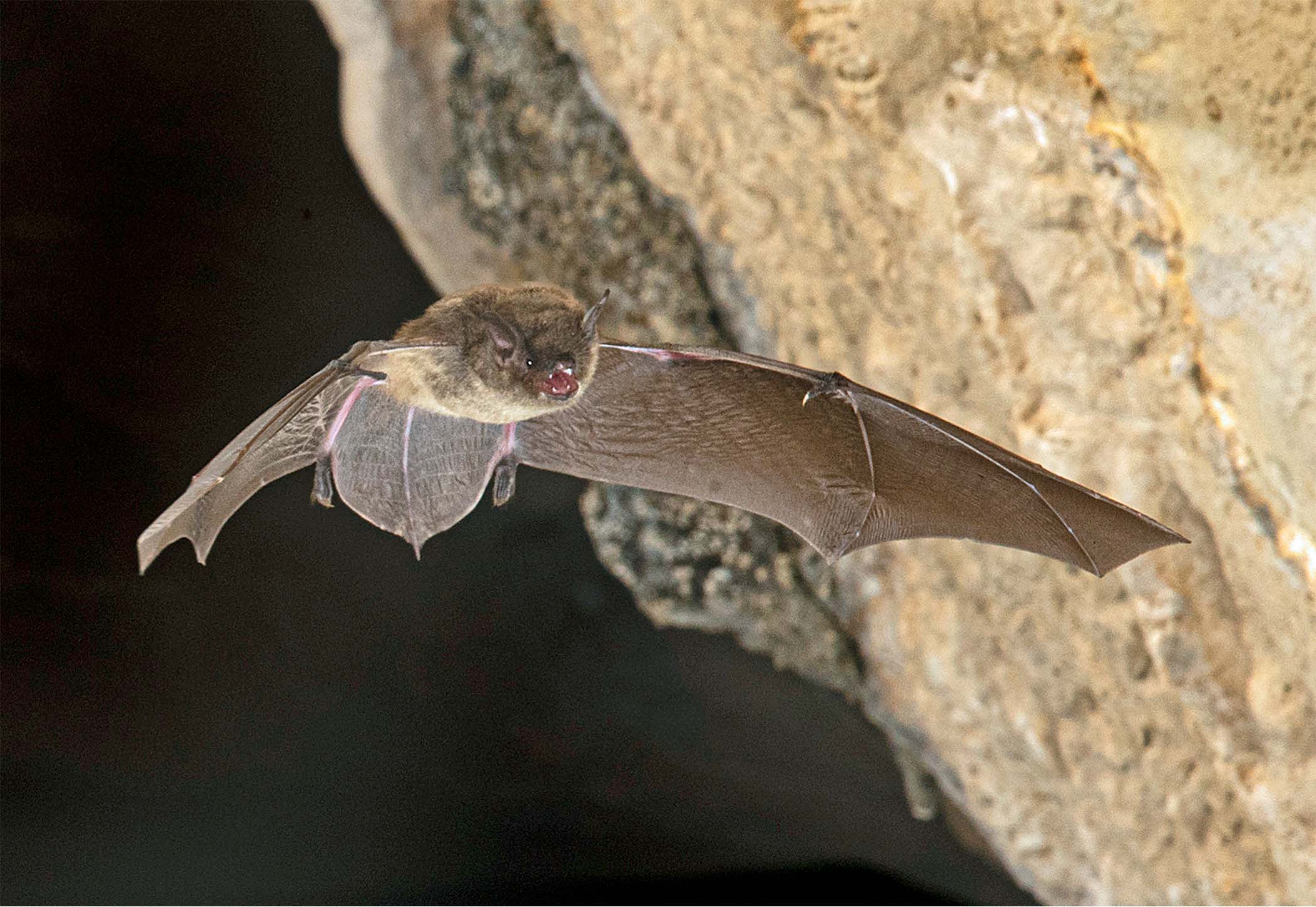 About 10,000 gray bats, an endangered species, use Weaver Cave in Anniston during the summer. (Photo by Price Sewell)

Important bat habitat in north Alabama has recently been protected in what Nick Sharp of the Alabama Wildlife and Freshwater Fisheries (WFF) Division considers possibly the highlight of his career as the Division’s bat expert. 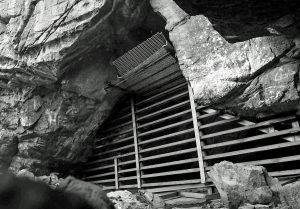 An opening at the top of the cave entrance provides easy access for the bats to the cave. (Photo courtesy of Sharon Brewer)

Steel gates have been installed on Weaver Cave in Anniston to protect the extensive underground caverns as important bat habitat.

“Someone brought my attention to a YouTube video of bats coming out of the cave that was shot about six years ago by a local caver,” Sharp said. “When I saw it, I thought they must be gray bats. So I started doing some investigating – catching bats coming out and counting bats coming out. We did some inside the cave surveys. It became apparent pretty quickly it was an important gray bat cave. Subsequently, we recognized it’s important for the tricolored bats as well.”

Gray bats are on the Endangered Species List, and tricolored bats are under review to determine if listing as endangered or threatened is justified. Another endangered species, the Indiana bat, may also use the cave at times, although more research is needed to verify its presence.

Sharp said Weaver Cave has a long history of human use. The Confederacy mined it for saltpeter during the Civil War. The mineral used to make gunpowder was loaded on the Selma, Dalton, and Rome Railroad less than a quarter-mile from the cave and shipped to the furnaces in Oxford and Rome, Georgia. That railroad line is now the Chief Ladiga Trail.

Before and after the war, the cave was reportedly used for different social activities, like dances and parties. After lighting was installed in the cave in the early 1900s, it became a popular destination for picnicking, school field trips, and Sunday school outings.

Sharp said gray bats, northern long-eared bats, and tricolored bats were documented in the cave as early as 1959. Because gray bats are extremely sensitive to human disturbance in their caves, the bat populations crashed through the early to mid-1900s. The species was listed as Endangered in 1976. The cave is now home to about 10,000 gray bats in summer. About 600 tricolored bats use the cave in winter, making it an important hibernaculum for this at-risk species.

When the Georgia-Alabama Land Trust acquired the cave in 2020, WFF contacted the Trust about protecting the bat habitat using steel gates to prevent people from entering.

With funding provided by the U.S. Fish and Wildlife Service and the Natural Resources Conservation Service, the gates were constructed and installed by Kennedy Above-Underground.

“These are called bat-friendly gates,” Sharp said. “A lot of investigation and thought was put into the design of these gates. They don’t restrict airflow at all. The main entrance to Weaver is the one where almost all of the bats come in and out. The bats always come out near the top, which was left open to give them enough room to flow out, and the bats do not get backed up behind it. 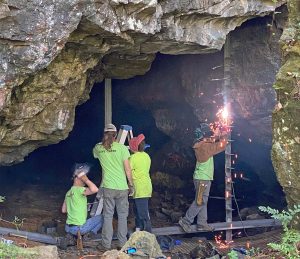 “We’re grateful to all the partners that made this rare conservation success possible,” Sharp said.

Although the caverns were once thought to be two different caves – Weaver (6,100 feet long) and Lady (6,400 feet long) – exploration by cavers determined the two were connected. As a result, they’re now commonly known as Weaver Cave.

“The cave system is quite extensive,” Sharp said. “It has multiple passages and chambers. I understand that Lady Cave was once used as a bomb shelter because it has a large cathedral size chamber. We found some gray bats roosting in that chamber in the spring. Part of the cave has a creek running through it, and many bats roost in that area.

“Gray bats are real particular what caves they will use. For whatever reason, they like this cave. I think some of it has to do with air circulation. In the summer, they like high domes because it traps heat.”

One area with a high ceiling is called the Chicken Room because the owner at the time attempted to raise chickens in the cave under artificial lighting.

Sharp said 15 species of bats have been documented in Alabama. The animals with a spooky reputation make a very valuable contribution to agriculture in the U.S.

“The point I always make about the bats in Alabama is they are all insectivores,” he said. “They all provide that ecological service of pest control. A recent research paper came out looking at the bats in south Alabama and what crop pests they were eating.”

“Another study that is often cited indicates that bats provide a minimum of $4 billion in pest control for agriculture in the U.S. With all the species we have, bats are eating billions of insects each summer night in Alabama.”

Sharp said the distribution of bats in Alabama varies a great deal. For example, gray bats are common in north Alabama along the Tennessee River.

“The red bat is probably the most common species we have in Alabama,” he said. “They roost in trees and not caves. They look like dead leaves when they roost. In the evening, if you’re looking in the night sky and see a bat flying, it’s likely a red bat or a big brown bat, which is another common species we have.”

Sharp said the northern long-eared bat and the tricolored bat populations suffered serious declines because of white-nose syndrome, a disease caused by a fungus introduced from Europe. 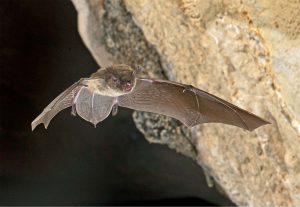 About 10,000 gray bats, an endangered species, use Weaver Cave in Anniston during the summer. (Photo by Price Sewell)

“White-nose syndrome is still raging on, unfortunately,” he said. “It continues to spread west. It made it to the West Coast and is slowly covering the western U.S. We have spent a lot of money on ways to prevent it but have not been successful. Some species are near extinction.

Sharp said the protection of Weaver Cave should be celebrated.

“This is a big win for conservation,” he said. “It’s rare in conservation in general to see a big win like this. Bats, specifically, because they’re getting hammered so hard by white-nose syndrome and suffer a bad reputation. Putting restrictions on a cave of this importance is a big deal. The cave is right beside a road and has been so heavily vandalized in the past. People had been going in it all the time. Now that the gates are up and it’s protected, it’s going to be interesting to see if the numbers increase. There are roughly 10,000 gray bats in there in the summertime. Just protecting them alone is a big win for conservation.”

Having been in this position for almost eight years, Sharp said, “This has to be a candidate for most the important thing I’ve been a part of in this job since I’ve been with Wildlife and Freshwater Fisheries.”