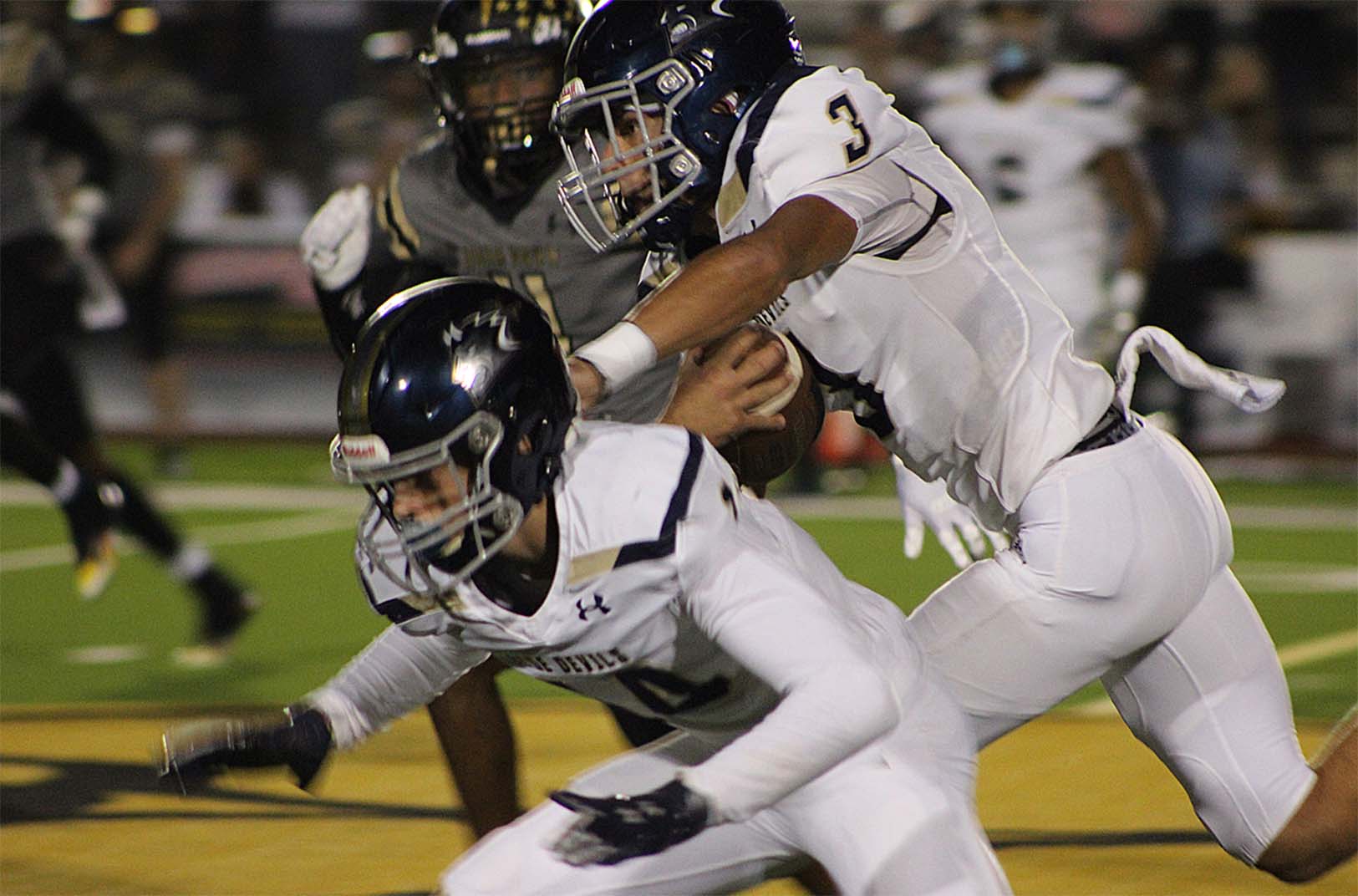 LINCOLN — Moody High School faced a devastating loss against Lincoln here, 19-31 on Friday, October 22, 2021, to go 5-4 and miss the opportunity to go to the playoffs. 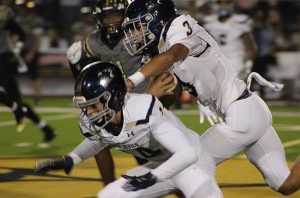 Kolby Seymour rushes the ball down the field against the Lincoln Golden Bears Friday, October 22, 2021. (Photo by Hannah Caver)

Junior quarterback A.J. Wallace was forced to sit out the game due to a collarbone injury, which resulted in Kolby Seymour stepping up as quarterback to face the Golden Bears. Lincoln scored first within the first four minutes of the game, but the Blue Devils fired back with Blaine Burke rushing the ball for a 67-yard touchdown, quickly tying the game with eight minutes left in the first quarter.

Still, Lincoln refused to roll over for the Blue Devils; battling back, they kicked a field goal boosting Lincoln to lead 7-10 at the end of the first quarter.

Seymour threw for 66 yards and went 9 for 14 on attempts through the air. Blaine Burke powered the running game, going for 129 yards on 12 carries for 3 touchdowns, while Davion Dozier caught six balls for 42 yards and rushed the ball 28 yards on 4 carries.

“Kolby Seymour stepped up to the plate, played his guts out tonight, Blaine Burke ran it like crazy, Davion made plays when he had to,” Moody head coach Adam Wallace said. “So it’s a tough situation to be in in this type of game with a guy hurt like that, but we’re not gonna make any excuses.”

Lincoln used quick strikes to exploit Blue Devil’s offense and defense. While Moody struggled to keep up with the Golden Bears, they scored their second touchdown in the third quarter, bringing the score to 13-10 and gaining the upper hand in the second half.

Unfortunately, it wouldn’t be enough to hold down Lincoln as they came back with a vengeance in the fourth quarter scoring 2 touchdowns back to back to bring the score to 13-23. However, Moody stayed light on their feet and responded with lightning speed moving the ball down the field, scoring their third touchdown of the night, bringing the score to 19-23.

The Golden Bears would scoop up the playoff spot with one more touchdown, bringing the final score to 19-31.

“Well, you know that officially eliminates us from the playoffs, unfortunately,” Wallace said. “But for our team to come out here and fight the way they did, give themselves a chance to win, but Lincoln made a few plays down the stretch and hats off to them.”

Next week, the Blue Devils are on the road when they travel to Springville to take on the Tigers.

“It was a really meaningful game because we had all our seniors, they’ve been going out for four years trying to be the best they can be,” Burke said. “We had to go through a whole new offense and everything this week to figure that out and get it down, but congrats to Lincoln.”