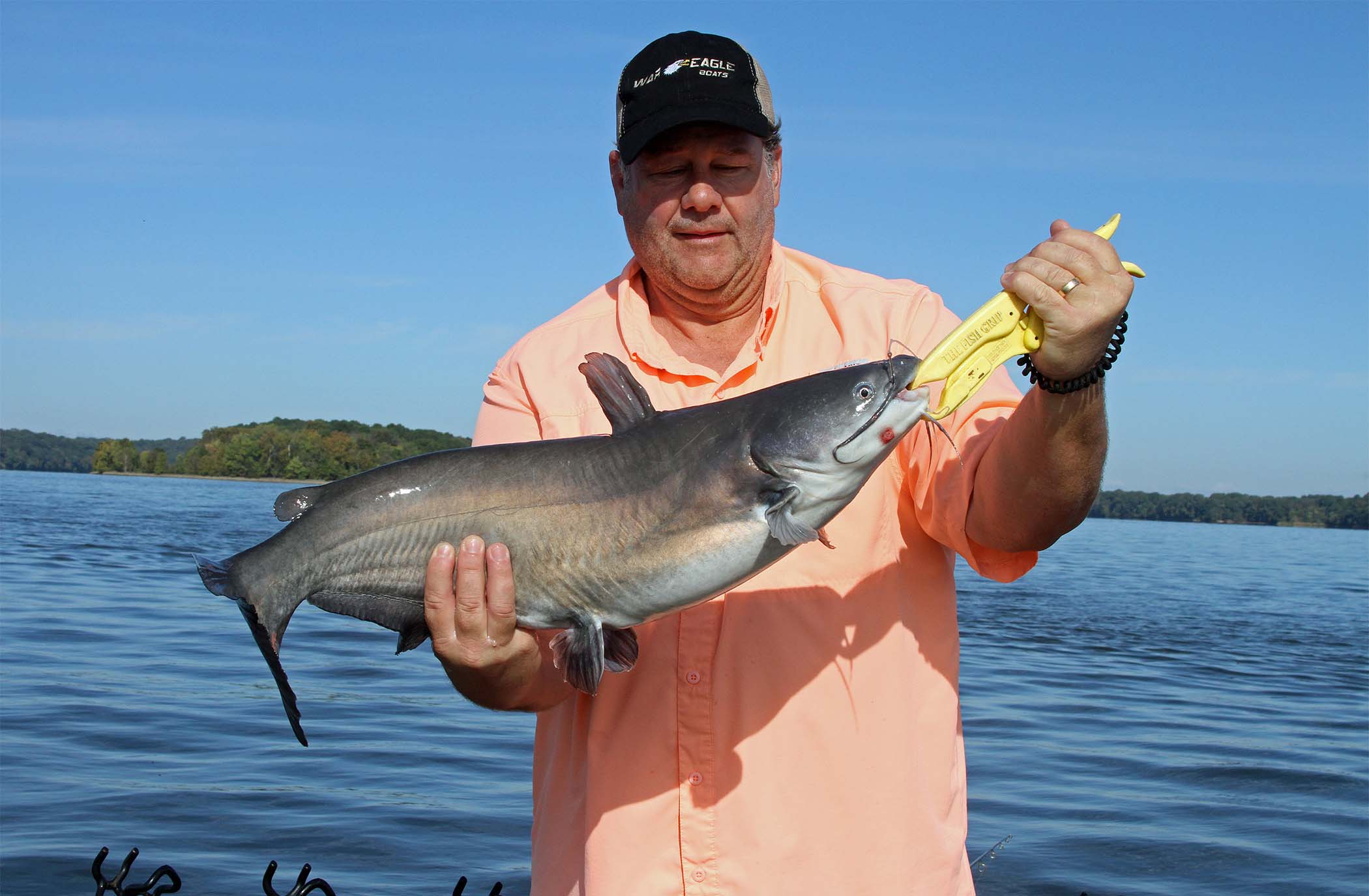 COLBERT COUNTY — Wisps of fog danced slowly on the surface of the Tennessee River near Muscle Shoals as Brian Barton scanned a creek off the main river for the telltale signs of the bait we sought for a day of live-bait fishing on Pickwick Reservoir. Threadfin shad and gizzard shad were the targets as Barton, and I looked for the bait flipping or tailing. 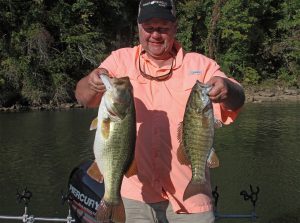 Captain Brian Barton shows off two species, largemouth bass and smallmouth bass, that are caught during a day of live-bait fishing on Pickwick Lake. (Photo courtesy of David Rainer)

When Barton saw promising signs, he threw his small cast net into the dark waters in hopes of quickly securing enough bait for a day of fishing. However, the cold front that produced the fog made finding bait a little more difficult. Nevertheless, Barton persisted with his casts and finally had enough shad in the baitwell to make the run to one of his favorite fishing spots, especially with live bait. Of course, the captured baitfish were for use on Pickwick only since Alabama’s Wild Baitfish Regulation bans transporting live baitfish away from waters where they were caught.

On Pickwick, the so-called community holes regularly get hammered by bass fishermen with artificial lures, making the fish especially finicky. Barton’s live-bait presentation can turn a reluctant fish into an active feeder.

“This time of year, I look in the mouths of the creeks downriver to find bait,” Barton said. “That can be tough sometimes. You can also buy shiners, but the river bait is the best. There’s always plenty of bait at the tailrace. The thing is, you usually get bigger bait in the middle part of the river. At times, the bait at the tailrace can be really small, and I’ll have to go to a cast net with a smaller mesh.”

Obviously, Barton’s guide service appeals to the novice or young angler who just wants to catch fish by any means necessary.

“This is what I call a family fun outing,” Barton said. “It’s not the skill required to use artificial baits and other lures. You catch lots of fish. Even with the cold front, we probably caught 150 pounds of fish. You typically catch lots of numbers. It’s fantastic in the fall and mid-spring. It’s something anybody can do.”

Barton can take three customers in his 22-foot War Eagle boat. He can also usually find another guide if the family or fishing party is larger than three.

After a chilly boat ride to the middle of Pickwick, a 43,000-acre reservoir, Barton pulled back the throttle and lowered his trolling motor that will hold the boat in one spot. The casting target was a pipeline that crossed the river. Riprap covers the pipe and provides a current break for the fish.

“Never cast upriver,” he said. “You’re guaranteed to get hung if you do. Cast at a quarter angle behind the boat and let the current drift the bait to the fish. If you don’t get a bite right away, let out a little more line and let the bait get a little farther downriver.”

Despite the possibility of hooking a monster blue catfish, Barton believes in light tackle. He uses an 8-pound test monofilament line with a high-durability finish to stand up to the rigors of fishing structure. Depending on the size of the bait, a No. 2 or No. 4 bait hook is tied with a Palomar knot, and the smallest weight he can get by with, depending on the current, is pinched about 2 feet up the line. 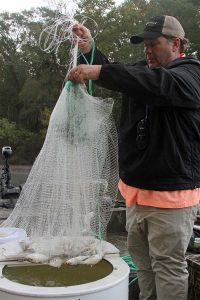 Barton shakes the shad out of his cast net into the baitwell. (Photo courtesy of David Rainer)

“This gives the most natural presentation,” Barton said. “If you come to these spots with 3- and 4-ounce sinkers, you’d better bring a box of 50 hooks because you’re going to lose a lot of tackle.”

One of the appealing aspects of live-bait fishing is you never know what you’re going to catch. Any species that eats shad could end up on the hook.

Barton said on a 4-5 hour trip, his anglers usually will catch between 30 and 35 fish in the fall.

“We’ll usually have one or two good smallmouth bass and largemouth bass 4 pounds or better,” he said.

On our trip, we moved to another community hole near the Natchez Trace, a rock dike built by early settlers to try to control floodwaters. We sat on this spot and landed largemouth bass, smallmouth bass, spotted bass, white bass, freshwater drum, and blue catfish up to 12 pounds. The biggest largemouth was a 7-pounder.

“Typically, if we’re fishing up the river at the tailrace, seven species is the norm, and nine or 10 species is not uncommon,” he said. “You never know.”

Barton said current could be the key when fishing any of the lakes on the Tennessee River.

“If you can choose your time, you always want to fish when TVA (Tennessee Valley Authority) is generating electricity, and you get maximum current,” he said. “You can use apps on your cellphone or your computer that will give you the generation schedule (www.tva.com/environment/lake-levels/) for that day. You always want to fish when there is maximum flow if you have the choice.

“Early in the fall, most of the time, the maximum flow will be in the afternoons because we’re still in a cooling situation with more air conditioners running. Later in November, you’ll see that flip to a morning generation schedule.”

If you’re looking for big fish, Barton suggests booking a guide trip in the spring.

“Spring fishing is incredible,” he said. “You don’t get the numbers of fish you get in the fall, but you have a shot at catching a 7-pound smallmouth. I’ve done that four times over the years. That’s a trophy anywhere. Catching smallmouth that will go 5 or 5½ pounds is very common. The difference in the spring is you’re pretty much only going to catch bass. You might catch a catfish or two, but you don’t get as many species in the spring as you do in the fall.

“We fish the tailrace but also fish the same areas we targeted in the fall – the Natchez Trace area and around the old Colbert County Steam Plant. Any of those areas are good in the spring. The only difference is we were fishing isolated cover in 15 to 20 feet of water. In the spring, you might be up on the bars or the submerged Indian mounds in 5 to 7 feet of water because the fish are moving up to spawn.” 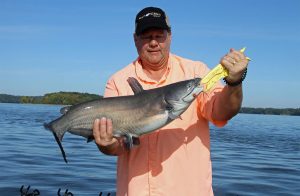 Barton has refined his live-bait fishing schedule. He offers live-bait trips from March 1 through April 15 and then September 15 through the end of November. He also offers select catfishing trips during May and early June. Contact Brian Barton at 256-412-0969 or send an email to brianbartonoutdoors@aol.com. Visit www.brianbartonoutdoors.com online.

Of course, fishing is the big draw for those who love the outdoors, but the Colbert County area offers a great deal more. Take the time to visit the Key Underwood Coon Dog Cemetery about 7 miles west of Tuscumbia.

If you’re a music lover, like me, check out the FAME Recording Studios, Muscle Shoals Sound Studio, Cypress Moon Studios, and the Alabama Music Hall of Fame. You’ll be surprised at the number of artists who have recorded huge hits in the Shoals.

And don’t forget Ivy Green, the birthplace and home of Helen Keller, located in Tuscumbia. Ivy Green, built-in 1820 by Keller’s grandparents, is on the National Register of Historic Places and offers tours of the home, gardens, and museum.

If you’re looking for a place to stay to enjoy the natural beauty of the area, consider Joe Wheeler State Park at nearby Rogersville. Joe Wheeler offers vistas of the Tennessee River from the Resort Lodge and 10 lakeside cottages. Go to www.alapark.com/parks/joe-wheeler-state-park to book your accommodations.

Visit www.VisitShoalsAL.com for more information on all the activities and historic sites in picturesque northwest Alabama.