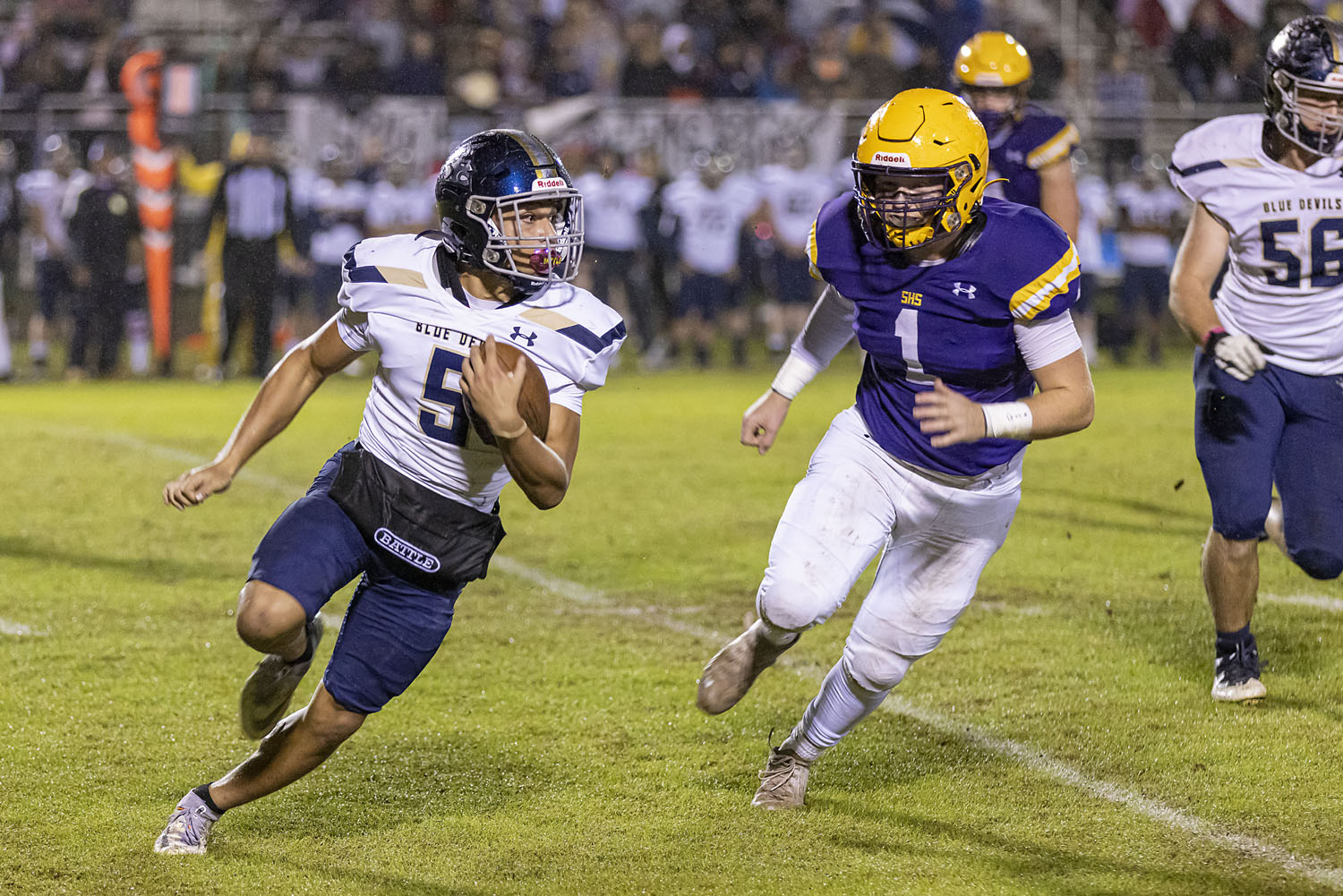 Blaine Burke ran for 163 yards and a score as Moody defeated Springville to finish 6-4 on the season. (Photo by Ron Burkett)

SPRINGVILLE — By the time Christian Sierra lined up to to kick a 20-yard field goal, the Moody Blue Devils had already proven their point. The Blue Devils, who suffered through a winless 2020 season, weren’t anyone’s doormat this season. 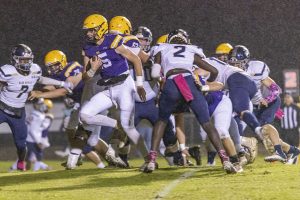 Asa Morrison scored twice for Springville, but the Tigers fell to Moody, 22-13 on Friday, October 29, 2021. (Photo by Ron Burkett)

Sierra booted the kick through the uprights and Moody (6-4) roared back from a 7-0 first quarter deficit to hand cross-county rival Springville (4-6) a 22-13 loss on a cold and rainy night that saw most of the field at the Tiger Stadium churned into muck.

“I think it’s a big turnaround for our team, winning the last one against our big county rivals, a 6A football team, will get us into our offseason the way we want to get there,” Moody head coach Adam Wallace said after the win. “We fell a little short of our goal this year to get to the playoffs this year, but man, we are bringing back a really good football team next year. If our kids will do what they’re supposed to do in the offseason and put in the work, they’re going to be a very good team next season.”

The Blue Devils were without starting quarterback A.J. Wallace, who was out with a collarbone injury. They were also without running back Nick Burrell, who left the team for unspecified reasons.

However, junior Kolby Seymour stepped up as the signal-caller for the Blue Devils, scoring twice and running nine times for 81 yards. Sophomore running back Blaine Burke ran for 163 yards and a touchdown as well.

Nothing came easy for the Tigers either, as Moody senior defensive lineman Logan Suggs again proved to be a force through most of the night, sacking Morrison twice and always forcing Springville to account for his presence.

With 5:11 left in the half, a near-disaster for the Tigers struck when the snap between the center and punter failed to connect. While Springville’s punter, Johnnie Wolf, had the presence of mind to follow the ball, grab it, and send off a hurried kick, the Tigers had given Moody good field position.

The Blue Devils made the most of it, too, when Burke converted a fourth-down on the ensuing drive and then Kolby Seymour scored on a play that didn’t quite go as planned. The center-quarterback exchange was muffed, but the ball popped right back into Seymour’s hands, and he found an opening on the left side of the line and scoring to tie the game 7-7 after the PAT.

“It was a perfect snap, too,” Seymour said of the bobbled ball. The drop, however, may have aided the play. For most of the first half, the Springville defense had been using three down linemen and walking their linebackers to the line of scrimmage in order to disguise the defense. When Seymour inadvertently dropped the snap, it gave the play an extra second to develop.

That was all the time he needed.

The second half looked like a different ballgame, as Moody made adjustments in order to begin moving the ball on their first possession. When the Blue Devils went up 13-7 on Seymour’s second scoring run with 10:22 left in the third quarter, the Tigers had to answer.

“They pretty much came out after halftime and kicked our butts,” said Springville head coach Jon Clements. “It ain’t no secret. They did a good job. That kid ran the ball hard. We had some kids get out of position a little bit, but that’s football.”

Springville left everything on the field as they came back to tie the game in the fourth quarter, but it took a while for the Tigers to respond. The third quarter ended with Moody still up 13-7, but then Morrison again found the end zone for Springville to tie it 13-13 after Moody partially blocked the extra point.

After Dozier made a good return to the 45-yard line for Moody, the Blue Devils went ahead on a seven-yard run from Burke to take a 19-13 lead with 7:49 to go after a missed extra point.

Springville got the ball back and was moving down the field when Morrison launched a pass that looked like it was heading for an open man. However, Chase Jackson came out of nowhere to nab an interception and kill the Tigers’ drive and put the Blue Devils back in the driver’s seat.