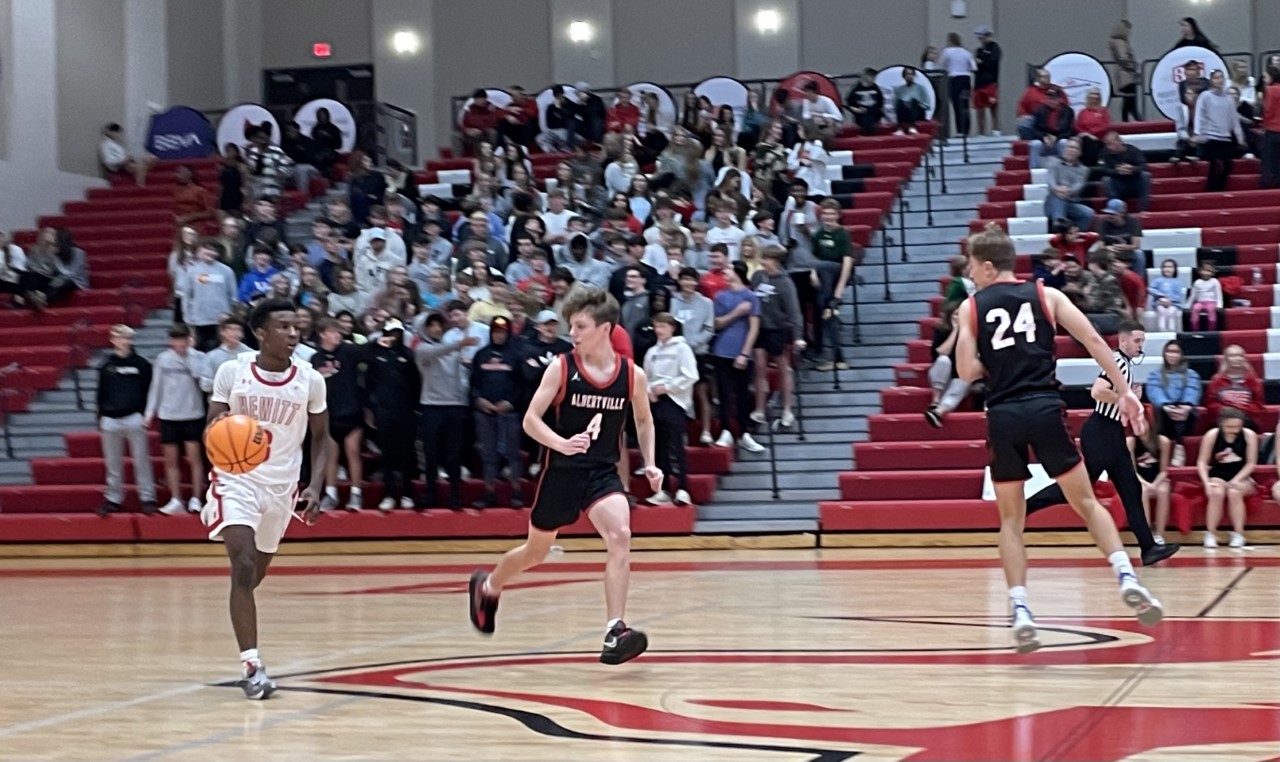 Hewitt-Trussville faced a team that was nearly a mirror image of itself in Albertville, coming away with a 51-47 victory on Thursday, November 4, 2021. (Photo by Bobby Mathews)

Huskies get win over Albertville to open season

TRUSSVILLE — Ray Rolley led Hewitt-Trussville with 16 points as the Huskies fought off the challenge of a tough, undermanned Albertville team Thursday night, but it was Emeka Anwah who iced the game for the home team, 51-47. 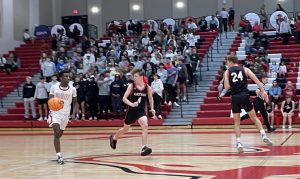 Hewitt-Trussville faced a team that was nearly a mirror image of itself in Albertville, coming away with a 51-47 victory on Thursday, November 4, 2021. (Photo by Bobby Mathews)

Anwah went to the foul line four times within the last three minutes of the game, making 5 of 8 free throws and leading the Huskies to a 7-2 burst in the late minutes after Albertville had surged ahead behind back-to back baskets by the Aggies’ William Kitchens and Givenchy Dorival.

The teams were practically mirror images of one another, with both teams pushing the pace up and down the court and using very few set plays in a half-court offense. At the end of one, the game was tied, 11-11, and it would remain close for the rest of the game until Anwah tied it up with 1:50 remaining in the fourth, and then Karnell Smith grabbed a rebound, spun, and got a put-back goal to go ahead.

The Huskies maintained that lead late by causing three turnovers in the last three minutes. But even though a win is a win, the Huskies coaching staff sees a lot of room for improvement.

“It was a typical first game,” Hewitt-Trussville coach Jeff Baker said. “We didn’t really look good at much of anything. I thought we left a lot of points out there on the court. We missed a lot of shots around the basket, and we missed a lot of free throws. But a 7A win is a 7A win, and especially in game 1 of the season, we’ll take it.”

Baker isn’t wrong. Hewitt-Trussville left a lot of points on the floor. The Huskies went to the charity stripe 35 times thanks to a physical defense from the Aggies that saw 9 Albertville players with at least two fouls and two players foul out. Hewitt-Trussville made only 16 of those attempts.

The game was a scramble from start to finish, with both defenses keying on turnovers to try to power the offensive game. Hewitt-Trussville forced 19 turnovers on the night, but also turned the ball over 16 times themselves. With two teams very evenly matched, Rolley, Anwah and Smith proved to be difference-makers.

“We enjoyed coming to compete against a team we knew would be well-coached,” first-year Albertville coach Dylan Bunnell said. “You can go play anybody early in the year. You want to go play well-coached teams that are going to challenge you and hopefully help you get ready for postseason play. We’ve got a lot to clean up, but we’ve got a young team that’s going to grow and be a lot of fun.”

Smith had nine points, and David Moore added six to round out the leading scorers for Hewitt-Trussville.