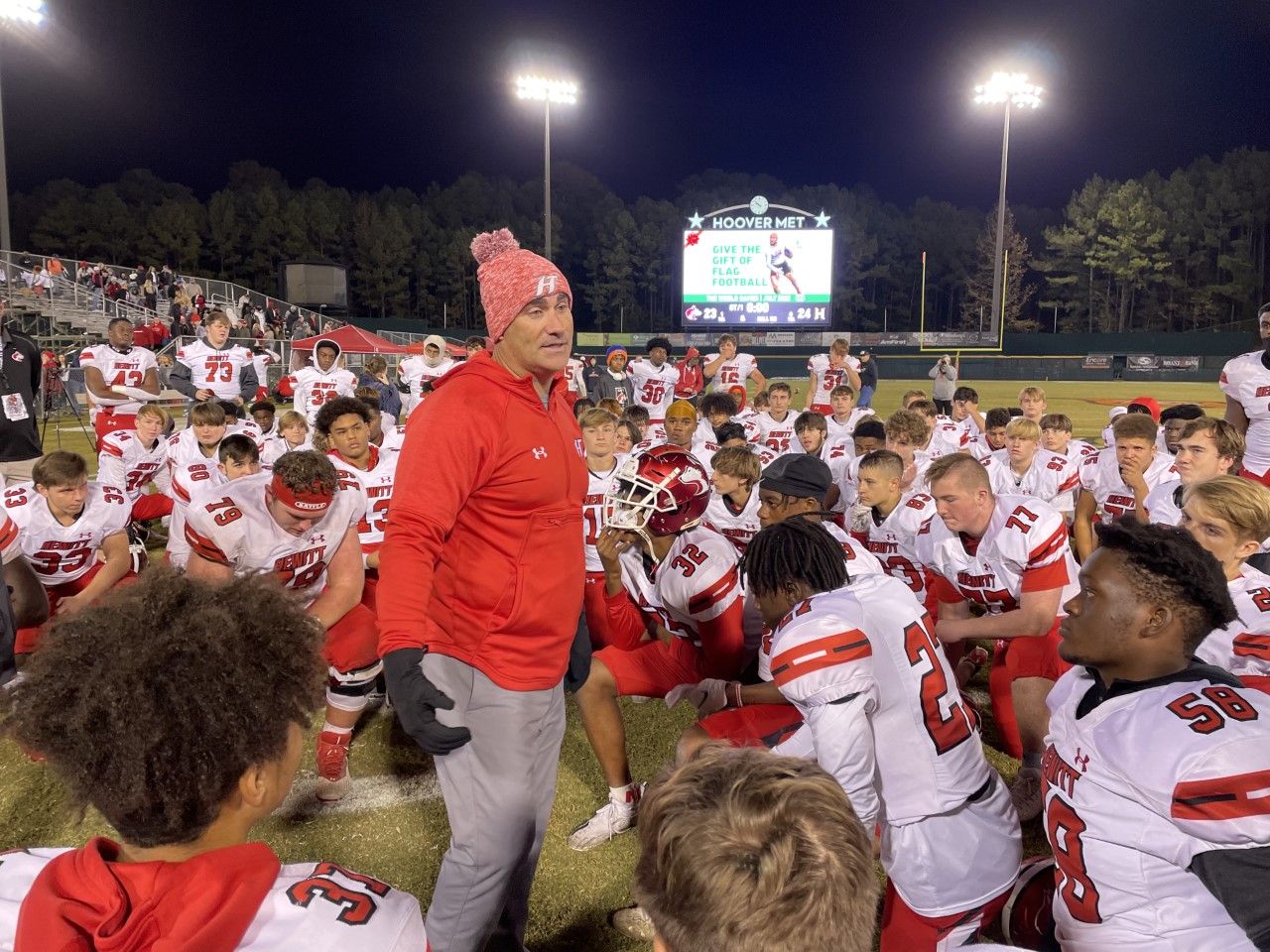 Hewitt-Trussville head coach Josh Floyd addresses his troops after a heartbreaking 24-23 loss against Hoover in the second round of the AHSAA playoffs on November 12, 2021. (Photo by Bobby Mathews)

HOOVER — Jordan McCants sat in the end zone for several minutes after it was all over, after the Hewitt-Trussville Huskies struggled so long to be the team that so many expected them to be this season. On a two-point conversion to beat Hoover in overtime, the senior wide receiver was open in the end zone for Cade Ott Carruth’s pass. 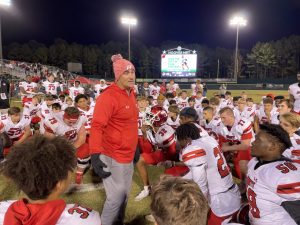 Hewitt-Trussville head coach Josh Floyd addresses his troops after a heartbreaking 24-23 loss against Hoover in the second round of the AHSAA playoffs on November 12, 2021. (Photo by Bobby Mathews)

The ball bounced out of McCants’s hands and hit the field for an incompletion, and Hewitt-Trussville came up short, 24-23 against the No. 1 team in Class 7A. McCants, like the rest of his fellow seniors, was inconsolable after the loss. The Huskies had given the Bucs all they wanted for 48 minutes and then some.

Hoover went ahead 24-17 in overtime when Bennett Meredith found RJ Hamilton on a 10-yard touchdown pass. The point after was good, and the pressure was on the Huskies.

James Hammonds answered, going over the right side behind Ryan Gunter to score and pull Hewitt-Trussville within one. That’s when head coach Josh Floyd made the decision to go for two.

“We came here to win a game,” Floyd said after the loss. “We’d do the same thing again if we had the opportunity. It just didn’t work out.”

The 2022 senior class was a special one, Floyd said, and he hated to see their season end the way it did.

“I can’t say enough about our senior class,” Floyd said. “They’re a great group, they leave a great legacy here at our program. They were fun to coach. They like each other, they enjoy playing together, and I just hate for it to end this way. We had them, and we just didn’t quite get it done.”

This was a different Hewitt-Trussville squad than the one that Hoover beat by 24 points on October first. From the very first play, the Huskies looked ready to take the fight to the Bucs.

After a scoreless first quarter, the Hewitt-Trussville defense stepped up at the goal line and stopped Hoover star running back Ahamari Williams at the one-yard line on fourth and goal to take over on downs. The Huskies marched down the field, aided by three penalties on the drive — one roughing the passer penalties and a pair of pass interference calls — and then Carruth found Omari Kelly in the end zone for an 18-yard score to take the lead.

After a missed PAT, the score stood 6-0, Hewitt-Trussville, but Hoover would answer when Sky Niblett went over the goal line from the 1. After the PAT, Hoover led 7-6 with 21 seconds left in the half.

The Bucs scored to start the second half when Williams scored from three yards out with 8:53 left in the third quarter, and the point after made it 14-6. After holding the Huskies to a punt, Hoover worked to increase its lead, but was stopped when a field goal try was no good and Hewitt-Trussville took over on downs.

The Huskies tried their own field goal, and CJ Curtis converted to bring the score to 14-9, and the defense again rose to the occasion and forced Hoover to punt. Peyton Argent blasted a punt deep into Husky territory, and then the Bucs got a break when the ball rolled out of bounds at the 1. Hewitt-Trussville was backed up against its own end zone again.

Carruth then led the Huskies on their second 99-yard scoring drive of the night, culminating in a screen pass to fullback Matt Miller, who had a convoy led by Riley Quick to accompany him to the end zone, and the Huskies led by one, 15-14. Hewitt-Trussville went for two, and Carruth found senior wideout Ryan Shoop in the back right corner of the end zone to convert. With 8:03 left in the third, it was 17-14 Hewitt-Trussville.

Hewitt’s defense again held Hoover to only a field goal in regulation, but in overtime, the Huskies simply couldn’t convert that last play.

Hewitt-Trussville finishes the 2021 season at 9-3. Next week, Hoover hosts Thompson.