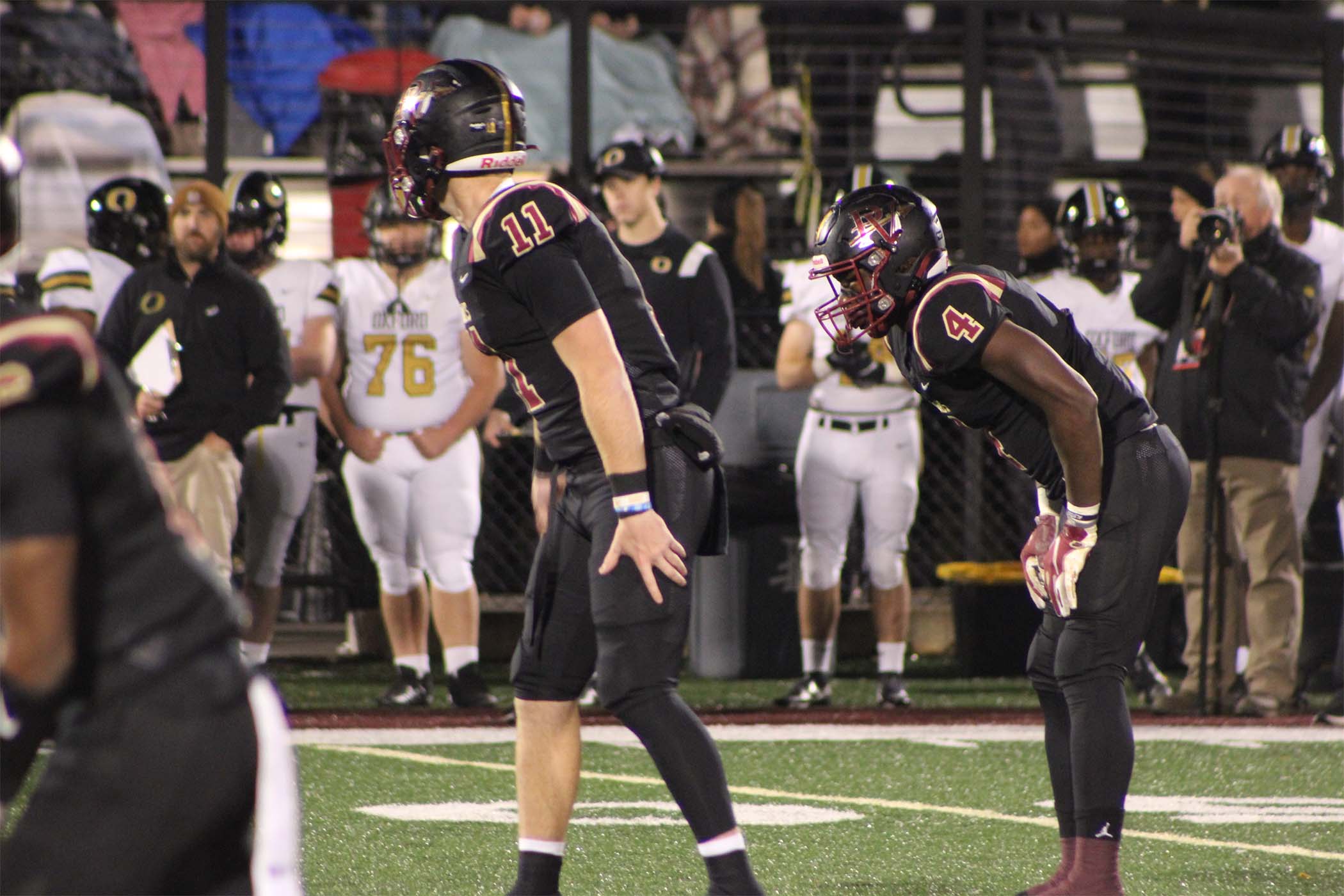 Zach Pyron and Mike Sharpe II set up for another play in hopes to get one step closer in going to the third round of playoffs. (Photo by Hannah Caver)

PINSON — Pinson Valley Indians stomped the Oxford Yellow Jackets for a 20-0 victory on Friday, November 12, 2021, to move on to the third round in the AHSAA 6A playoffs. 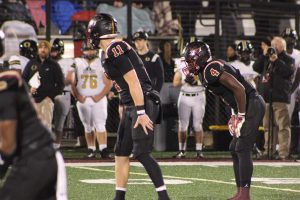 Zach Pyron and Mike Sharpe II set up for another play in hopes to get one step closer in going to the third round of playoffs. (Photo by Hannah Caver)

The Indians were powered by senior quarterback Zach Pyron who rushed for 77 yards for 2 touchdowns and went 5 for 10 on attempts through the air for 57 yards.

Pinson Valley showed themselves to be a force when Amare Thomas scored the first touchdown in the first 17 seconds of the game on a kick-off return.

Oxford attempted to rush the ball down the field but time and time again slammed into the wall of the Indian defense. Pinson Valley refused to give the Yellow Jackets a chance, ruthlessly pushing them further away from the end zone.

“Defensively, we just got to keep it going,” head coach Sam Shade said. “Coaching staff did a great job on defense had a good plan, and players executed that.”

Mike Sharpe II fueled the running game going for 106 yards on 13 carries, and Taurus chambers rushed for 69 yards on 11 carries.

“Oxford’s always a big rival; they’re always a tough team,” Pyron said. “I’m really just proud of how we kept fighting in the last two weeks. That’s something I’m really proud of with this team is how we’ve handled adversity, and there’s no give up on this team. Everybody keeps fighting, and nobody wants to quit.”

The Indians used quick strikes to exploit the Yellow Jackets’ offense and defense. While Oxford struggled to score, they held Pinson Valley to only a one-touchdown advantage going into halftime. Unfortunately for the Yellow Jackets, it wasn’t enough as Pinson Valley came into the second half looking even more solid than before.

Penalties rattled the Indians offense, but they refused to hold them back from the victory they were fighting hard to accomplish.

“We’ve got to clean up some things on all offense as far as our penalties that we had just far too many penalties on offense,” Shade said.

Next week Pinson Valley is home again as they take on Mountain Brook.