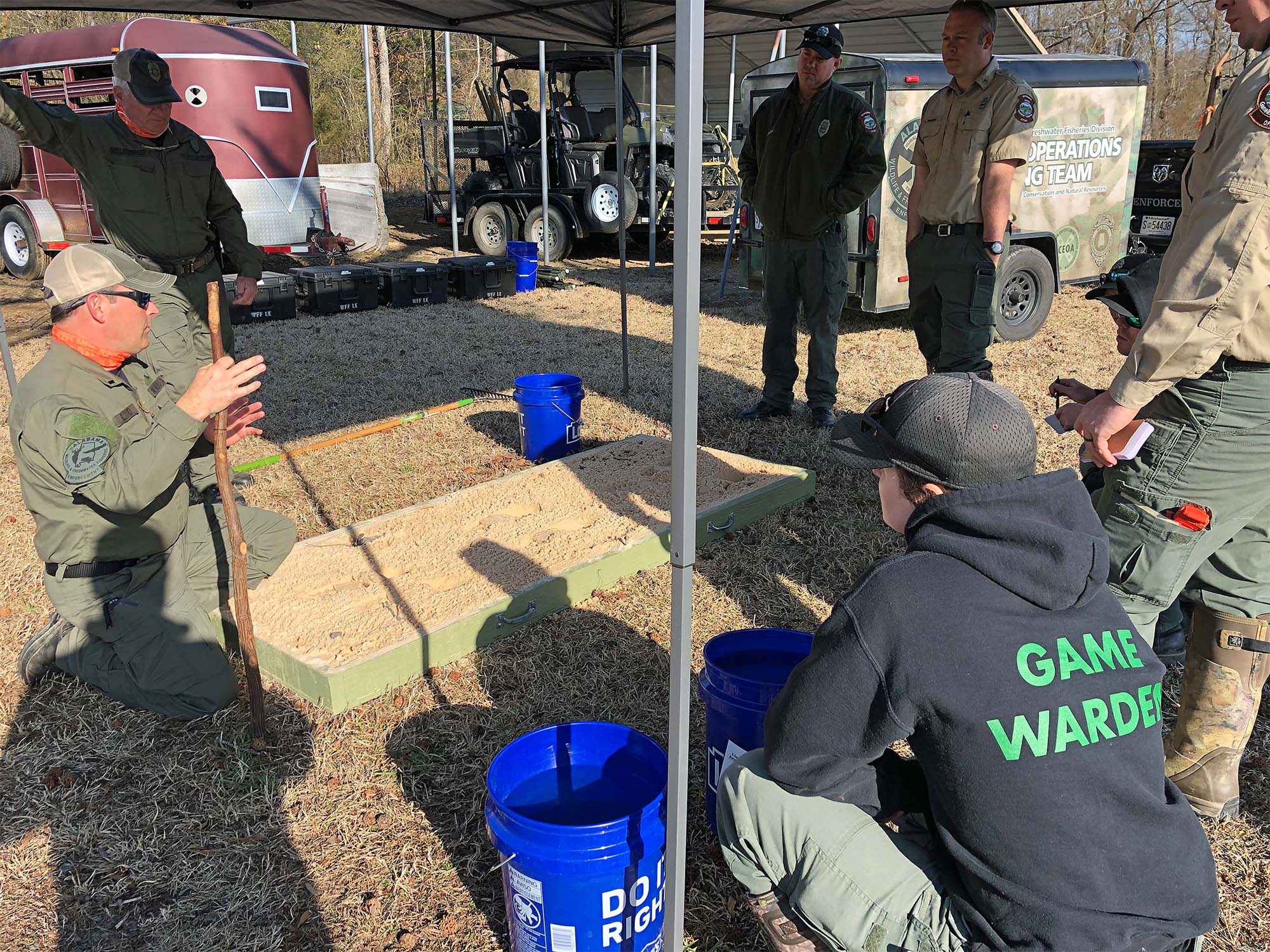 In 2017, the Law Enforcement Section of the Alabama Wildlife and Freshwater Fisheries (WFF) Division began providing specialized training for its new recruits. The Section has now expanded to sharing that unique training with other agencies, even with other states. 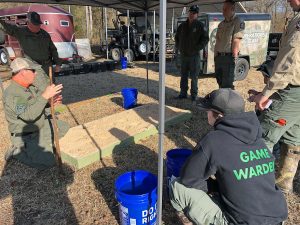 Carter Hendrix, Assistant Chief of WFF Law Enforcement, said the idea to offer more than basic training to help new recruits transition to the Alabama Department of Conservation and Natural Resources (ADCNR) came to fruition in 2017 with the Rural Operations for Law Enforcement curriculum.

“Our instructor cadre came up with the idea of helping new trainees get a jump-start on their careers by teaching them vital skills outside the standardized training we do, like firearms qualifications,” Hendrix said.

After the Rural Operations for Law Enforcement instructors amassed information and wrote a student manual in 2018 to go with the training, they started traveling the state to train game wardens.

“We did five courses statewide and taught every game warden these vital skills,” Hendrix said.

“Basically, they’re taught to stabilize an injured person in order to get them to a higher level of care, either a hospital or EMT (Emergency Medical Technician) on the nearest roadside,” Hendrix said. “It covers everything from stopping blood loss to constructing improvised methods of carry, like hasty litters and drags. We construct hasty litters by cutting small trees or poles and use two or three uniform shirts to carry the injured person on a litter.”

At times, game wardens will help search for missing persons or suspects attempting to flee from law enforcement. The Search Formations instruction deals with those scenarios.

“We teach working in formation to search for Alzheimer’s patients, lost hikers, and hunter, or sometimes fugitives attempting to escape in a wilderness terrain,” Hendrix said.

Man-Tracking is the final portion of the training.

“Man-Tracking is exactly what it sounds like,” Hendrix said. “It’s being able to identify tracks, being able to locate tracks or sign of any person or animal passing through an area. Sign could be footprints, broken limbs, trash, or any number of things. 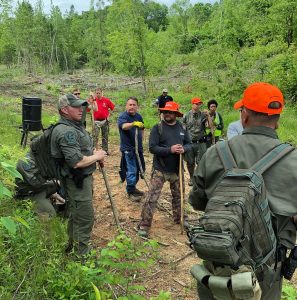 Alabama’s team also instructed the Arkansas officers on how to perform searches in formations. (Photo courtesy of Carter Hendrix, Arkansas Game and Fish)

“We take two days and teach those skills. Then we run realistic scenarios to test the officers’ skill levels and determine what they have learned.”

In 2018, Alabama hosted the annual Southeastern Association of Fish and Wildlife Agencies (SEAFWA) Conference in Mobile. During the conference, WFF Law Enforcement presented a condensed version of the Rural Operations training to the law enforcement chiefs from other states at an off-site event in Baldwin County.

“We took them to the Baldwin County Sheriff’s Department range and shared with them some of the training we were utilizing as an outreach tool to other sheriff’s departments, police departments, and rescue squads in an effort to share our knowledge and capabilities with other agencies,” Hendrix said. “They loved the idea and the backpacks we issue as go-bags to the officers. The contents of those go-bags include first-aid kits and blood-loss control items like tourniquets and granulated blood stop. The officers also take extra ammo, food, and water. Some of the items we mandate for uniformity, and some may be personal preference.”

After the SEAFWA Conference, several states reached out to WFF Law Enforcement and asked about training for their officers.

Because of the COVID-19 pandemic, a training session requested by the Arkansas Game and Fish Commission was postponed until this year.

“We went to Arkansas Game and Fish Commission’s training facility and taught 12 of the instructors the Rural Operations for Law Enforcement,” Hendrix said. “We were there for four days. We went through the student course allowing time for questions related to teaching the course. On the third day, their instructors had to teach back to our instructors what they had learned.”

The Alabama team left Arkansas on a Friday. On Sunday, Arkansas officials received a report of a lost hiker on a large Arkansas wildlife management area.

“A crew went out to search, but it got dark, and they could not locate him,” Hendrix said. “On Monday, they went back out, and three Arkansas game wardens located the hiker. He had stripped down and was hypothermic. It had rained the night before, and he was soaking wet.

“One of the three officers had been in the Instructor/Trainer course, so they constructed a hasty litter. They took two small trees they had cut down and three BDU (battle dress uniform) style long-sleeved shirts to make a litter. They carried the hiker over a mile through the woods and met with an EMT unit that was waiting for them to get back. 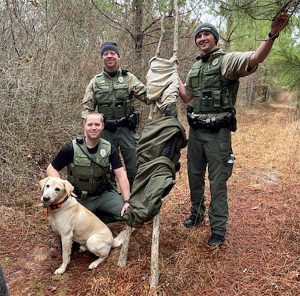 Arkansas game wardens used training from Alabama Law Enforcement to construct a hasty litter to transport a lost hiker out of the woods. (Photo courtesy of Carter Hendrix, Arkansas Game and Fish)

“The hiker had a health condition that required medication, which he had been without. One of the EMTs told the Game and Fish officers that the hiker would not have survived another night without medical attention. So, that was a life-saving success right out of the gate after one of the officers, who had been at our training, decided they needed to construct a hasty litter and carry the lost person to a higher level of care.”

Hendrix said since the Rural Operations team has been in existence, it has taught thousands of rescue squad members in the blocks of instruction. An Alabama team recently went to Pigeon Forge, Tenn., to teach the course to the Tennessee Rescue Squad Association.

“We use this as an outreach tool not only for law enforcement but for people who might never come into contact with a game warden,” he said. “Serving the public in numerous ways is vitally important to us. We want to be seen as more than just what people usually think game wardens do. We think this is a tool we can use to help accomplish that goal.

“I feel like this is one of our most valuable tools. It gives our new officer trainees a leg up on a successful career by teaching them vital skills like tracking, something that might take years to develop otherwise.”