The win capped a perfect 12-0 season for the Huskies, but it wasn’t easy.

After being stymied for most of the game, Smith Station quarterback Brynn Repicky found Emily McGuire on a desperation heave into the end zone to tie the game with 12 seconds remaining to tie it at 13. The Panthers could have won it in overtime, but the Huskies’ D’Yona Jones closed on McGuire, who was open momentarily in the end zone, and batted the ball away to force overtime.

For flag football, each team was awarded one possession, and could go for one, two, or three points, depending on where they wanted the ball spotted for the play. Neither team scored in the first overtime, and then McGuire caught a ball on the eastern side of the field, but came down with her foot out of bounds.

Dorsett scored on the next play to win the game and the championship.

The win was the culmination of a dream that began in the spring of 2021, when it was announced that flag football would be played in the fall as a pilot program for Alabama high schools. 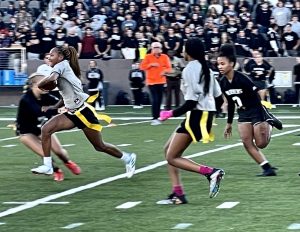 Audre Benson scored with fewer than 2 minutes remaining in the first half to give Hewitt-Trussville a 13-7 lead. (Photo by Bobby Mathews)

“When coach (Taylor Burt) sat at a table back in April when we were asked to do it (coach), we first argued about who was going to be the head coach,” co-head coach Tonya Hunter said.

“Not argue about who wanted to do it,” Burt said. “We were both trying to give it to the other person.”

The pair settled on being co-coaches, with Hunter leading the defense and Burt leading the offense.

“This has been the best experience I’ve ever had — I love basketball, but this experience, just sharing it with Coach Taylor and those kids out there that battled, that was awesome for us. And not just for us but for girls’ flag football.

Repicky got the Panthers on the scoreboard first, moving Smiths Station down the field with timely passes to multiple wide receivers on the first drive of the game. One yard away from the end zone, Repicky called her own number, and after the PAT, Smiths Station led 7-0.

But Powell and the Huskies answered back immediately, marching downfield until the quarterback danced along the western sideline and found the end zone on a nine-yard score. After a missed extra point, the score was 7-6, with Smiths Station in the lead.

They maintained that lead until Audre Benson broke free with 1:44 left in the half, finding the end zone to put the Huskies ahead 12-6. Avery Huffstutler scored the extra point, and Hewitt-Trussville was up 13-7. 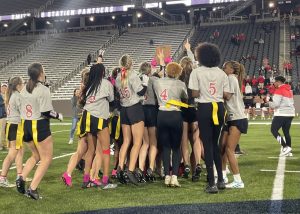 “This is an amazing feeling,” Powell said. “It feels great to be with my teammates and also my family from different sports. It’s amazing to be the first-ever champions.”

Most of the second half was a defensive struggle, as both offenses were able to move the ball, but neither scored. The closest either team got was when a fourth-down pass went off the hands of Rubie Simon, and the Huskies turned the ball over on the Panthers’ 9-yard line.

“I’m telling you, that was a very (good game),” Hunter said. “If you watched the Iron Bowl, like, that was the girls’ Iron Bowl right there.”

There were definite similarities to the 2021 Iron Bowl: The last minute scoring drive, the multiple overtimes. But to win it, Hewitt-Trussville went back to the play they had called in the first overtime — the exact same play, according to Burt.

And this time it worked.