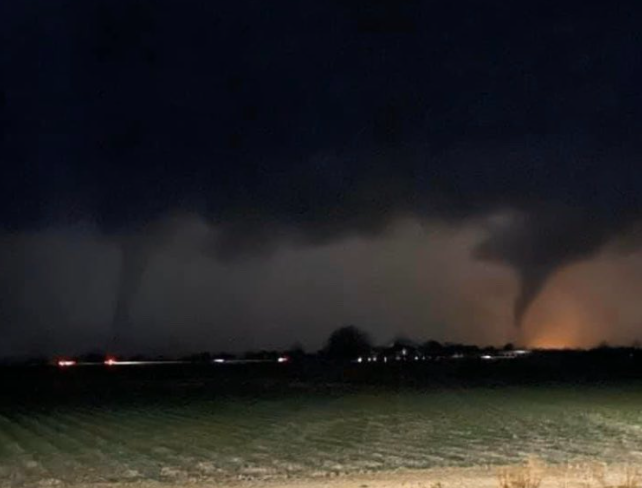 In this image taken by Angie Burgess, two tornadoes that menaced an area near Jonesboro, Arkansas, are clearly visible overnight. 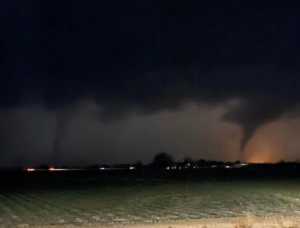 In this image taken by Angie Burgess, two tornadoes that menaced an area near Jonesboro, Arkansas, are clearly visible overnight.

Local reports estimate that as many as 100 people have died, though the tally right now from officials is “at least 50.”

Meteorologists with the National Weather service believe at least one of those tornadoes was on the ground for some 200 miles, a “long-track” tornado similar to the one that hit Tuscaloosa, Alabama, in April of 2011.

A candle factory in Mayfield, Kentucky took a direct hit while around 110 employees were working. The nearby Graves County Courthouse and county jail were also struck; in Edwardsville, Illinois, an Amazon fulfillment center was destroyed; in Monette, Arkansas at least one person was killed and more than 20 injured when a tornado hit a nursing home.

Central Alabama was also under a tornado watch following the events from Friday evening and Saturday morning. However, as of 9 a.m. on Saturday, the watch had been lifted.