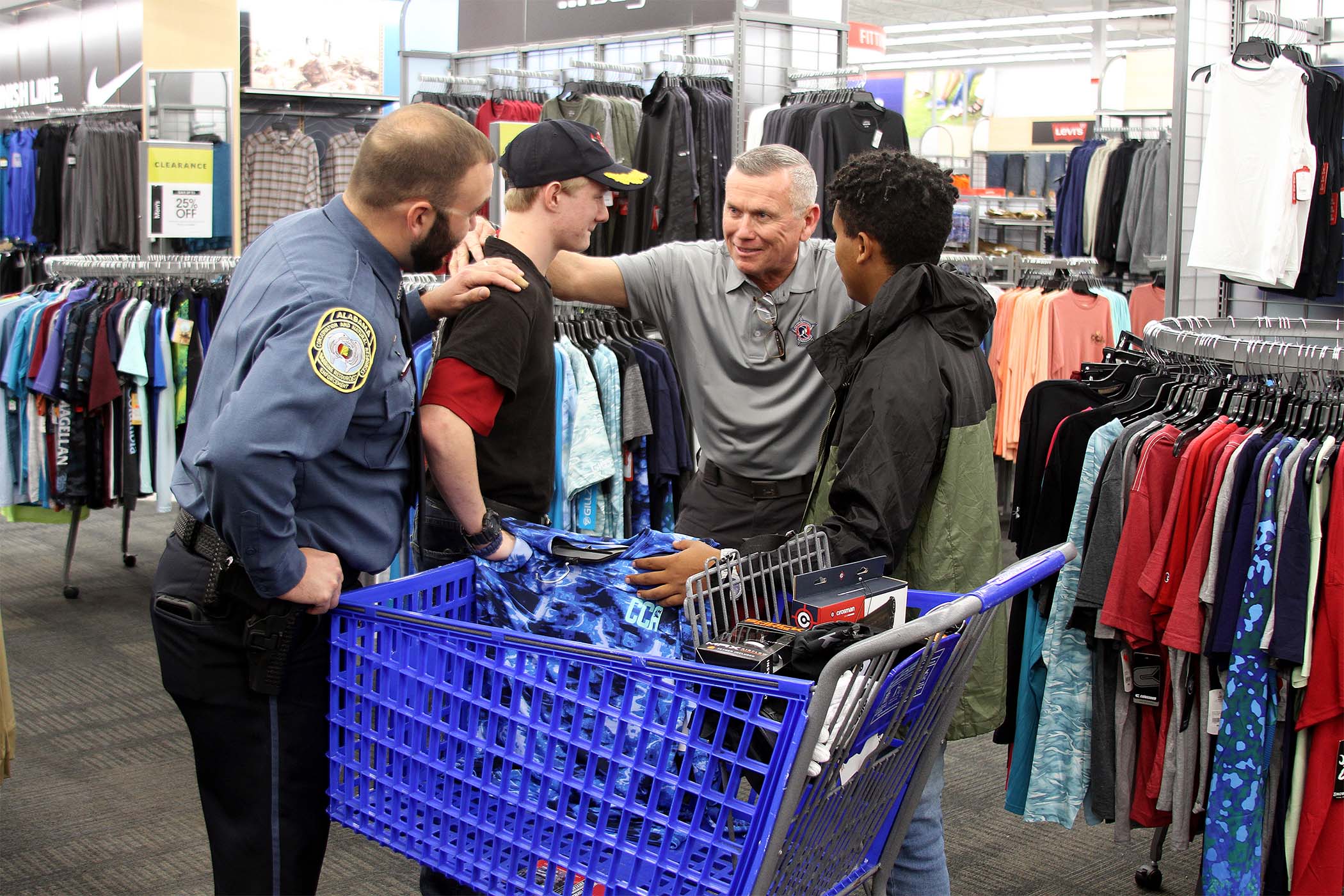 ADCNR officers aid youth at shop with a cop events

Last week’s Shop with a Cop events at three Academy Sports + Outdoors locations in Alabama got off to a somewhat tentative start, but it wasn’t because of a lack of funds or availability of products. 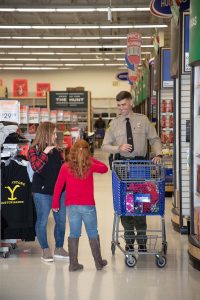 Wildlife and Freshwater Fisheries officers Shane Jerkins and Katie Brown help the ranchers shop for clothes at the Academy store in Montgomery. (Photo courtesy of Billy Pope and David Rainer)

Each youth from three Alabama Sheriffs Youth Ranches was provided a $200 gift card to use at the Academy Sports + Outdoors locations in Florence, Montgomery and Foley. Conservation Enforcement Officers from the Alabama Wildlife and Freshwater Fisheries (WFF) Division and Alabama Marine Resources Division (MRD) provided aid and guidance for the youths’ shopping choices. The Alabama Conservation Enforcement Officers Association (ACEOA) provided a donation to feed the youths after the shopping spree.

According to Michael Smith, CEO of Alabama Sheriffs Youth Ranches, the slow start for the shopping spree was because most of the kids from the three ranches – Colbert County Girls Ranch, Tallapoosa County Girls Ranch and Baldwin County Boys Ranch – had never been in that situation before.

“I just want to express how much we at the Alabama Sheriffs Youth Ranches appreciate the Department of Conservation and Natural Resources (ADCNR) and Academy Sports + Outdoors for embracing our ranchers like they did,” Smith said. “Many of these ranchers had never even been in a store like that with that kind of money. I noticed it at the event. They were so overwhelmed by it they didn’t know where to go first.

“Without the help of people from the Conservation Department and Academy Sports + Outdoors, they might not have been able to do something like that. It’s great for me as CEO of the Sheriffs Ranches to see the State of Alabama caring for our young people.”

Chris Blankenship, ADCNR Commissioner, attended the event in Montgomery and said not only did the young people fill shopping carts, ADCNR benefited greatly as well.

“The Shop with a Cop event was incredible for all involved,” Commissioner Blankenship said. “We appreciate, first, the generosity of Academy Sports + Outdoors and the Alabama Conservation Enforcement Officers Association. They both have been great partners and supporters of ADCNR and outdoor recreation in Alabama. I want to commend our Communications and Marketing Section Leader Billy Pope for organizing these events and his ongoing work with Academy and others to promote ADCNR and the work of our staff to more Alabamians. Events like this are good for all of us.

“I don’t know who enjoyed the shopping more, the kids or the Conservation officers. They all looked like they were having a ball. This is really a great opportunity for the officers and the kids to get to know one another on a different level and in a different situation. It helps both groups look at the other as real people and individuals. That sort of community involvement is good for the officers and helps us all remember why we got into this work in the first place. We are out working to conserve the natural resources of Alabama for this generation and the next. Spending time getting to share that love for the outdoors and our fellow man is good for all involved. The young people at the Boys and Girls Ranches have been through a lot. This program helps them to have a good Christmas and to get to know some men and women in law enforcement that can be positive role models and resources as they grow.” 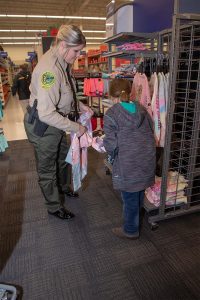 Wildlife and Freshwater Fisheries officers Shane Jerkins and Katie Brown help the ranchers shop for clothes at the Academy store in Montgomery. (Photo courtesy of Billy Pope and David Rainer)

Smith said the feedback from the youth who participated in the events has been great. He said his son, WFF Conservation Enforcement Officer Kirk Smith, assisted at the Montgomery event and shared that some of the girls were removing tags and donning new shoes and pullovers as they left the store.

“He (Kirk) said it was a touching thing to see and how much, as a law enforcement officer, he enjoyed having dinner with them afterward and hearing their stories,” the elder Smith said. “To have the officers in that atmosphere being the good guys was special for us all. We know they’re out there to protect. I hope this encourages some of our ranchers to consider a law enforcement career because they did see the good side of it.

“I’ve gotten pictures and comments from the girls and boys who were at the events, saying how much they appreciate it. We had several of our youth ask that the Conservation officers come and visit the ranches. Those officers made our young people feel so comfortable. This was a side of law enforcement that many of them had never seen. Some come from troubled homes, and to see those officers in full uniform pushing those buggies around, taking care of those young people was special, not only for the ranchers but for me as CEO as well.”

Smith said the three aforementioned ranches are currently in operation with plans to reopen another facility at Pell City because of the need for young people to live in a Christian environment.

“These are needy kids,” Smith said. “They’re great kids. They’ve just been in not-so-good situations. Some of the kids come from DHR (Department of Human Resources). Some have been in multiple foster homes. We also get private placement, for example, a child is born, and the mother may be addicted to something or incarcerated or whatever. It may be that the grandparents adopted the baby, and now that the child is older, they aren’t able to care for them anymore. They come to us for help so we assist in building them into young men and women who can benefit themselves, their families and our state.

“Our slogan is that it’s easier to build boys and girls than to repair men and women. With the situation with our prisons and homelessness and foster care, we try to give these young people a home where they can flourish. We will keep them all the way through trade school or college, whatever they decide to attend. We are their family at that point.”

ACEOA Executive Director Kevin Dodd, a retired game warden, said Billy Pope suggested this would be a perfect opportunity for the association to plug into the effort to help the young people at the ranches.

“We were more than happy to help,” Dodd said. “Our officers who participated said it was more rewarding than just about anything they’ve done in the course of their work. One of the house parents at the event said some of these kids have never had the opportunity to even pick out a Christmas tree. That speaks volumes about where they’ve been. They may look normal on the surface, but you don’t know where they’ve come from.

“And I can’t say enough about Academy Sports + Outdoors. I’m happy that Academy has picked up the baton and run with this. I look at it as an investment by Academy and our association. We hope this will start an outdoor adventure for these young people that might become a lifetime of recreation for them.”

Scott Bannon, MRD Director, echoed the sentiments of his colleagues about the success of the events. Bannon attended the event in Foley.

“I think it’s an incredible event,” Bannon said. “It’s a great opportunity for young people to spend some time with these officers and realize they’re good people and people they can trust. For our officers to get the opportunity to help these young people and share some life experiences, it’s an amazing two-hour event. Our officers were humbled by the experience and by these guys who come from challenging situations. 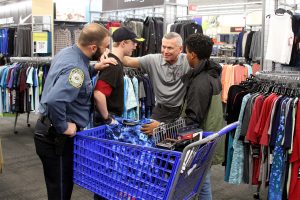 “And the community embraced it as well. One family was in the store and found out what was going on. They immediately went to a cash register and purchased five $50 gift cards to donate to the ranches. Another person came up to Mr. Smith and wanted to know how he and his wife could help, and they discussed arrangements for future assistance.”

Rick Burleson, Academy’s Regional Marketing Specialist said the Shop with a Cop events were a result of a long-standing partnership with Outdoor Alabama and ADCNR with the focus of sharing the love of the outdoors. Academy also supports ADCNR’s Go Fish, Alabama! program.

“With the holiday season, we wanted to treat some young people with tough life experiences with a shopping trip in our stores,” Burleson said. “Accompanied by Conservation Enforcement Officers, they could pick out their own clothing, footwear or recreational equipment and hopefully make their evening.

“All the feedback I received was positive. I was at the Florence location, and the girls from the Colbert County Girls Ranch were a little shy and hesitant at first, but you could quickly see them opening up to the officers and bonds being formed. There were a lot of smiles and laughing. It was certainly rewarding to be a part of.”