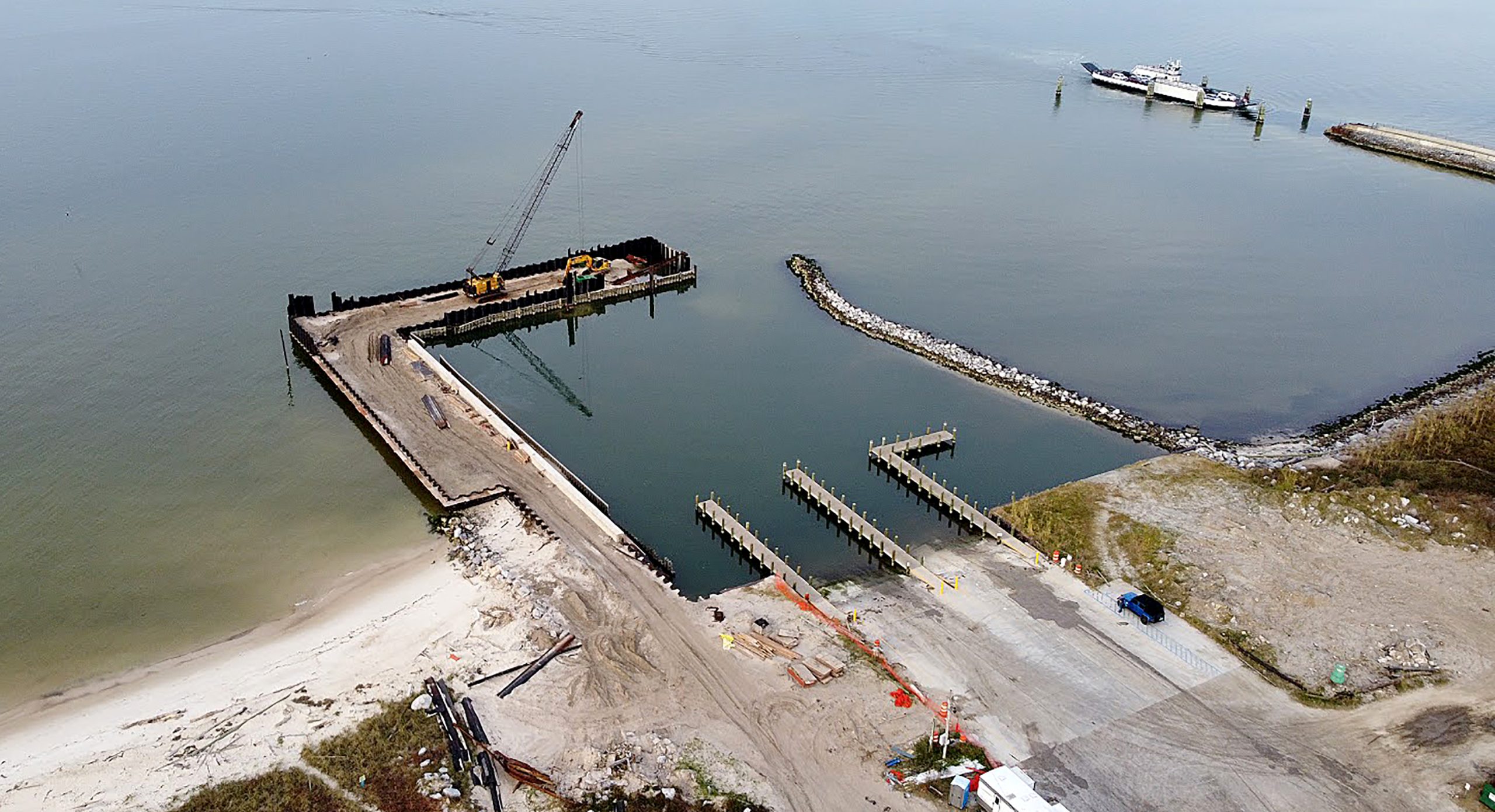 The pier will be L-shaped and the concrete pad will be 8 feet off the water. (Photo courtesy of Mike Badonsky)

For the first time in almost eight years, onshore anglers should again have access to the great fishing on the lower end of Mobile Bay this spring when the new and improved Fort Morgan Pier opens. 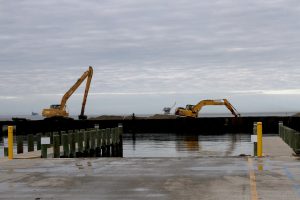 The rebuilding of the Fort Morgan Pier on the east side of Mobile Bay is expected to completed this spring. (Photo courtesy of David Rainer)

The renovated pier will be L-shaped dimensions of 305 feet by 210 feet and 40 feet wide. The pier floor will be 8 feet off the water’s surface at mean tide.

“We immediately ran into delays due to Covid,” Bannon said. “The purchasing of the sheet pile was delayed several months. Then Hurricane Sally came in and delayed construction. We allowed a break in the contract to repair the (ADCNR/ALEA) Alabama Point facility that was damaged during the storm. It was important for law enforcement and search and rescue access be restored. Additionally, labor shortages have been very challenging for the general contractor as well as subcontractors.

“But I think we’re on the downhill side. We anticipate an early March completion.”

Because the new pier is located on a historic site, special rules apply to the excavation of the area, which expanded the construction timeline.

“Under the previous pier, there were some barges that were considered to be of historical significance,” Bannon said. “I believe they were placed there during World War II for a temporary pier. The fishing pier was then built around the barges. They were not in the exact position that we thought, so when the contractor was driving sheet piles and hit a piece of the barge, it required mitigation, removing those pieces and redriving the sheet piles.”

The original pier was built with timbers and held up considerably well through its 40-year lifespan, but the double whammy of Hurricane Ivan in 2004 and Hurricane Katrina in 2005 took its toll.

“It was pretty much rendered unsafe and had to be closed in 2014,” Bannon said. “The Alabama Department of Conservation and Natural Resources (ADCNR) and the Alabama Historical Commission worked together to pursue funding from the Deepwater Horizon settlement money through NRDA (Natural Resource Damage Assessment).”

The total cost of design, construction, and oversight of the new pier was $3.2 million. ADCNR Commissioner Chris Blankenship said the reopening of the Fort Morgan Pier will fill a missing piece of outdoors recreation on the Fort Morgan peninsula. 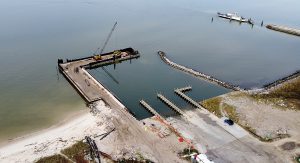 The pier will be L-shaped and the concrete pad will be 8 feet off the water. (Photo courtesy of Mike Badonsky)

“I am glad that the Fort Morgan Pier renovation is nearing completion,” Commissioner Blankenship said. “This project has been a long time coming. As Alabama’s Lead NRDA Trustee, it was important for us at ADCNR to get this once popular public access site back in operation after many years of it being shut down due to damage from storms and the years of being in the harsh coastal elements. It is being reconstructed in a way that should withstand the test of time and storms.

“I would like to thank Representative Steve McMillian for his unwavering support for this project and for all the good work he champions in his district in south Baldwin County. He has been a true asset for this area during his decades of public service.”

Bannon said the upgraded Fort Morgan Pier will serve dual purposes by providing a fishing venue and serving as a seawall for the adjacent boat ramp and basin.

“We worked very hard to develop a design that we felt would withstand the majority of weather anomalies and hurricanes we experience here on the Alabama coast,” Bannon said. “That is why we went with steel sheet pile with a concrete platform. The railings are made of cables. It will be ADA (Americans with Disabilities Act) compliant. There will be ADA parking spaces, and it will have a much better parking area for all of the anglers. We plan to improve the boat ramp parking as well. We rebuilt the boat ramp there.

“The new pier is not only a fishing pier; it also provides protection for the boat basin and ramp. The old seawall had deteriorated and allowed sedimentation to build up pretty rapidly. This will help prevent some of that sedimentation.”

Bannon said the contractors were able to dredge the sedimentation from the boat basin, much of which was deposited during Hurricane Sally, and use that material to fill the pier instead of having to truck in fill material.

The good news for anglers is they will soon have access to the abundant inshore species that inhabit the mouth of Mobile Bay, including red drum (redfish), speckled trout, and flounder.

“That area on the Fort Morgan peninsula is known for flounder fishing,” Bannon said. “Later in the year, the flounder migrate through that area to go out into the Gulf of Mexico. The fish make their way down there any time from October through December. That’s why we have the November flounder closure, to protect those fish on their way to spawn. That area is a shallow, sandy area that the fish-like.

“We have a nearby Marine Resources inshore fishing reef. We will also have rock material around the base of the pier that will provide protection but also serves as a fish habitat. I think we will see the common species that people caught there before will start to show up and be pretty quickly caught by anglers.”

David Thornton, known as Pier Pounder on social media, is a dedicated pier and surf fisherman on the Alabama Gulf Coast and celebrates the reopening of the Fort Morgan Pier.

“I think it’s really going to help,” Thornton said. “It’s an element that has been missing for several years. The seclusive nature of that pier meant that it was seldom overcrowded, but it was a popular spot for people on vacation on the peninsula. It was a nice venue, especially when the Gulf beach was too rough. In the summer and fall, it’s a good flounder spot. And people should catch lots of white trout and ground mullet and quite a few redfish. It’s really neat it’s coming back into play.” 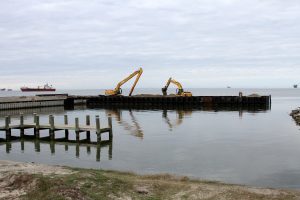 The pier will also provide protection for the boat ramp and basin. (Photo courtesy of David Rainer)

Bannon said he has already had contact with anglers who had fished the original pier regularly.

“I talked to a gentleman about 80 years old who had come down when we started the initial construction,” he said. “He had fished that area most of his life. He was very excited about the opportunity to get back out on the pier and fish again. This is about providing access to people who don’t have boats. We know access to water is limited, and this new pier is an iconic structure that we want to have back available to anglers. This is access anglers haven’t had that they’re excited about, and we’re really excited about being able to provide it. I feel pretty quickly we are going to see packed houses on Friday and Saturday nights.

“For that population that didn’t have access to the water, I think this will soon become another destination spot much like the Gulf State Park Pier.”

Before Bannon became MRD Director, he was head of the Enforcement Section and regularly patrolled the entire Alabama Gulf Coast.

“Years ago, when I was on patrol, I would recognize the same people fishing on the pier,” Bannon said. “It’s going to be nice to go by again and see those folks enjoying fishing.”