LATEST NEWS
Home Opinion Opinion: Loss to Georgia is a sentimental one

Opinion: Loss to Georgia is a sentimental one

Somewhere up there, Lewis Grizzard and Larry Munson are dancing in celebration. Their Georgia Bulldogs trounced Alabama in the national title game on Monday, January 10, 2022. 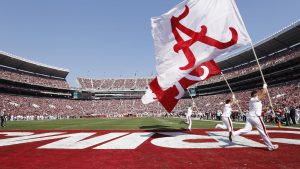 Well, that’s fair. Alabama’s had a pretty good run as the top team in college football for more than a decade now. There have been contenders and pretenders, but the general outlook over that period of time has been that there are three certainties in life: death, taxes and Alabama football.

Georgia claimed its first national championship in 42 years, and let’s be honest: It was well past time. The Bulldogs have been frontrunners since the Mark Richt era, nearly always ranked highly and then fading down the stretch. That changed on Monday night.

But before Georgia fans get too carried away, there are some things to point out.

This was supposed to be a ‘down’ year for Alabama, and the Crimson Tide still won the SEC title by handing the Bulldogs their only loss of the season. They still dismantled previously unbeaten Cincinnati to reach the championship game.

They went into the title game down two starters in the defensive backfield and without one of the best receivers in the country, John Metchie, who was injured in the SEC championship game. And then in the title game, Jameson Williams went down with a knee injury.

Now, no excuses here: The Bulldogs were better on Monday night, and they proved it on the field.

But let’s not pretend that Alabama is washed up, because they will likely always be in contention for a national championship as long as Nick Saban is running things at the Capstone.

Now, I confess that even as an Alabama fan, I was a bit conflicted Monday night. I wanted Alabama to win, but my personal history with Georgia is a little more complex. I was born just outside Augusta, and I returned to live in the peach state when I got tired of sojourning in Wyoming after a couple of years.

My hometown paper — like most Southern papers in those days — featured Lewis Grizzard’s humorous and sometimes touching five-day-a-week column. I found in Grizzard a voice of the authentic and complicated South, and I was so very taken with it.

If I could recommend to you one book of Grizzard’s, it would be If I Ever Get Back to Georgia, I’m Gonna Nail My Feet to the Ground, which details his time growing up to become a journalist, including becoming the youngest-ever sports editor at the Atlanta Journal-Constitution. Had Grizzard taken a different track, he would have probably become one of the great newspaper editors … none of whom I could name today.

As I watched the Georgia-Alabama game Monday night, I kept thinking of Grizzard and Bulldog home radio broadcaster Larry Munson, whose legendary calls from the booth have to be heard to be both believed and appreciated. While Alabama’s Eli Gold remains the, well, gold standard for home radio play-by-play, Munson couldn’t be trusted with down and distance. Sometimes he couldn’t even be trusted with the players’ names. It didn’t matter, though, because he loved Georgia so much, and conveyed that love through every word he uttered.

So if there’s such a thing as a sentimental loss, this one is it. Congratulations to Georgia for beating Alabama for the national championship. You earned it. Hopefully we’ll see a rematch next year.

There are worse things out there than losing a national championship game. Some folks lose the Birmingham Bowl.

Bobby Mathews is sports editor at The Tribune. Reach him at bobby.mathews@trussvilletribune.com or on Twitter: @bobbymathews.